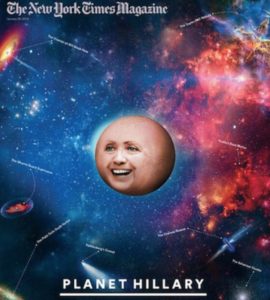 Today, everyone is talking about Michael Morell’s Op-Ed in the New York Times in which the former acting director of the CIA strongly endorses Hillary Clinton while calling Donald Trump “an unwitting agent of the Russian Federation.”

At the end of the piece the New York Times informs readers that:

Michael J. Morell was the acting director and deputy director of the Central Intelligence Agency from 2010 to 2013.

Well, one of its founders is a man named Philippe Reines. Here’s an excerpt from his bio:

Prior to joining the State Department with the Secretary, he served from 2002-2009 as Senator Clinton’s Senior Advisor & Press Secretary. In 2007-2008, Mr. Reines simultaneously served on Hillary Clinton’s presidential campaign as Communications Advisor for National Security & Foreign Policy, and served as Chelsea Clinton’s spokesman, traveling with her throughout the primaries, often with the candidate and Former President Bill Clinton.

You’d think readers might want to know this, but the New York Times doesn’t appear interested in informing its readers. It’s more interested in shoving Hillary Clinton down everyone’s throats.

The New York Times’ “oversight” is particularly egregious considering the fact that it was New York Times Magazine which went so far as to describe Reines as “Clinton’s principal gatekeeper” in a 2014 article.

Not that this should surprise anyone. When it comes to politics, The New York Times is a pure and unabashed propaganda outlet. This was proven without a shadow of a doubt during the Democratic primary when the paper endorsed Hillary Clinton over Bernie Sanders in an embarrassing article devoid of all logic or intellectual honesty.

In fact, the endorsement was so offensive, I went out of my way to write a critique of it in the post, A Detailed Look at The New York Times’ Embarrassing, Deceitful and Illogical Endorsement of Hillary Clinton.

One of the biggest trends of the post financial crisis period has been a plunge in the American public’s perception of the country’s powerful institutions. The establishment often admits this reality with a mixture of bewilderment and erroneous conclusions, ultimately settling on the idea people are upset because “Washington can’t get anything done.” However, nothing could be further from the truth. When it comes to corruption and serving big monied interests, both Congress and the President are very, very good at getting things done. Yes it’s true Congress doesn’t get anything done on behalf of the people, but this is no accident. The government doesn’t work for the people.

With its dishonest and shifty endorsement of Hillary Clinton, I believe the New York Times has finally come out of the closet as an unabashed gatekeeper of the status quo. I suppose this makes sense since the paper has become the ultimate status quo journalistic publication. The sad truth is the publication has been living on borrowed time and a borrowed reputation for a long time. Long on prestige, it remains very short on substance when it comes to fighting difficult battles in the public interest. Content with its position of power and influence within the current paradigm, the paper doesn’t want to rock the boat. What the New York Times is actually telling its readers with the Hillary Clinton endorsement is that it likes things just the way they are, and will fight hard to keep them that way. It is as much a part of the American establishment as any government institution.

The paper seems to have once again proved my point.