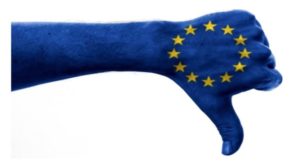 – Pew Research Survey Points to Widespread Angst About How the EU is Handling the Refugee Crisis:

When the history books are finally written, I believe the tone-deaf handling of the refugee crisis by EU bureaucrats will be seen as one of the primary catalysts in the ultimate disintegration of the European Union.

Although I knew many millions across the eurozone were irate about how the refugee crisis was being handled, I had no idea how irate they were until I read the results of a recent survey by the Pew Research Center.

Below are some of the shocking findings.

A record 1.3 million migrants applied for asylum in the 28 member states of the European Union, Norway and Switzerland in 2015 – nearly double the previous high water mark of roughly 700,000 that was set in 1992 after the fall of the Iron Curtain and the collapse of the Soviet Union, according to a Pew Research Center analysis of data from Eurostat, the European Union’s statistical agency.

European publics have been far from satisfied with how the EU has handled the historic number of refugees arriving there. A spring 2016 Pew Research Center survey conducted across 10 EU member states following the EU-Turkey agreement found that majorities in each country disapproved of how the EU was dealing with the refugee issue.

Disapproval was generally greatest in countries with the highest number of asylum seekers in 2015. For example, 94% of Greeks and 88% of Swedes said they disapprove of how the EU has handled the refugee issue. Sweden received the third highest number of asylum applications in 2015. And while Greece was not the final destination for most refugees in 2015, it was their main point of entry, with about 850,000 arrivals in 2015 alone.

Even in countries with a lower number of asylees, disapproval of the EU’s handling of the refugee issue was widespread, including in France (70%), the UK (70%) and the Netherlands (63%). And in Germany, which had the most asylum applications in 2015, fully two-thirds faulted the EU’s approach to the refugee crisis.

Now here’s the chart for a wider sampling of EU nations. Conclusion: No one is happy. 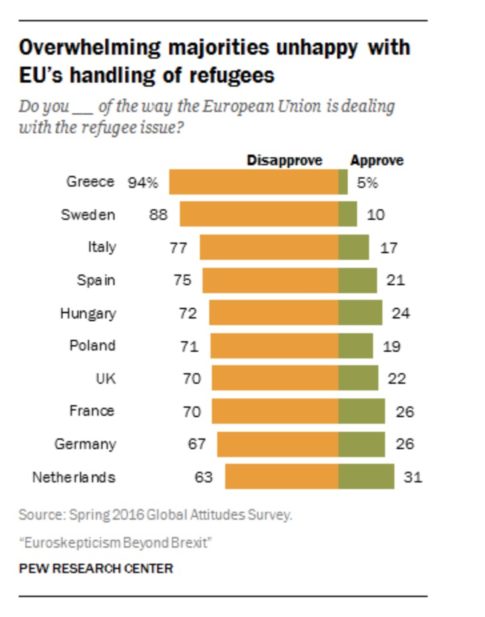 In addition, men made up nearly three-fourths (73%) of Europe’s asylum seekers in 2015. Refugees from leading origin countries such as Syria (71%), Iraq (75%) and Afghanistan (80%) were also predominately male in 2015. By contrast, asylum seekers from other top origin countries, such as Gambia (97% male), Pakistan (95% male) and Bangladesh (95% male), were almost entirely male.

Even though a record number of asylum seekers arrived in Europe in 2015, the surge has had a limited impact on the share of the overall resident population in the EU, Norway and Switzerland that is foreign born. That share is up only 0.3 percentage points, from 11.0% foreign born in 2015 to 11.3% in 2016. It has had a large impact, however, in leading destination countries like Sweden, Hungary and Austria, whose foreign-born shares rose by more than 1 percentage point in a single year. By way of comparison, the foreign-born share of the U.S. population increased by 1 percentage point between 2005 and 2015. (The U.S. has about one-fifth of the world’s immigrants and has historically been the world’s top destination for international migrants.)

Pretty incredible stuff, and something I warned about in last year’s post, Does the Migrant Crisis Represent the End of the European Union?

Although everyone watching has been convinced that Europe’s disastrous economy and related debt crisis would be the spark to unravel the European Union project, it appears history has its own plans.

While EU technocrats have demonstrated an uncanny ability to scheme, threaten, kick the can and lie their way around the debt crisis, the migrant crisis will prove to be a much graver threat to the project. Strikingly, all it took was a few weeks of unrelenting migrants crossing into EU borders to put an end what is essentially the only achievement of the European Union — the Schengen system of borderless travel.

Without that, what is the EU really? A collection of nation-states forced by bureaucrats to pretend they are part of an artificial fantasy superstate called Europe? An amalgamation of debt serfs and technocratic overlords? See what I’m getting at?

Brexit = Death of the Technocrats

The Elites Have Lost the Right to Rule – Part 2