– Revealing the Real Rate of Inflation Would Crash the System:

The grim reality is that real inflation is 7+% per year.

This week, I’ve noted that Consumer Prices Have Soared 160% Since 2001 while under-the-radar declines in value, quantity and quality are forms of Inflation Hidden in Plain Sight.

What would happen if the real rate of inflation was revealed? The entire status quo would immediately implode. Consider the immediate consequences to Social Security, interest rates and the cost of refinancing government debt.

So what happens if the status quo accepted the reality of 7+% inflation? Here are a few of the consequences:

The Problem with Social Security and Medicare (July 17, 2013)

The Social Security system would be revealed as unsustainable if real inflation (7+% annually) were made public.

2. Global investors might start demanding yields on Treasury bonds that are above the real rate of inflation. If inflation is running at 7%, then bond buyers would need to earn 8% per year just to earn a real return of 1%.

Central states are only able to sustain their enormous deficit spending because interest rates and bond yields are near-zero or even below zero. If the federal government suddenly had to pay 8% to roll over maturing government bonds, the cost of servicing the existing debt–never mind the cost of borrowing an additional $400 billion or more every year–would skyrocket, squeezing out all other government spending and triggering massive deficits just to pay the ballooning interest on existing debt.

Bond yields of 8+% would collapse the status quo of massive government deficit spending.

3. Private-sector interest rates would also rise, crushing private borrowing. How many autos, trucks and homes would sell if buyers had to pay 8% interest on new loans? A lot less than are being sold at 1% interest auto loans or 3.5% mortgages.

4. Any serious decline in private and state borrowing would implode the entire system. Recall that a very modest drop in new borrowing very nearly collapsed the global financial system in 2008-09, as the whole system depends on a permanently monstrous expansion of new borrowing to fund consumption, student loans, taxes, etc. 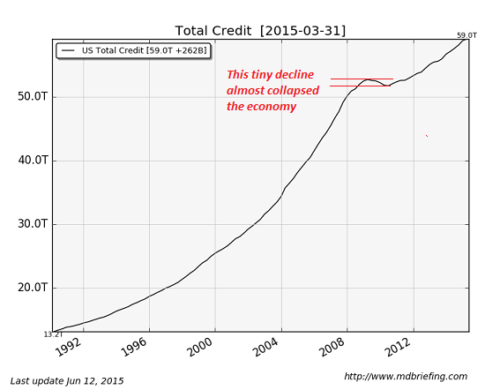 How many billions of dollars will be siphoned off the debt-serfs, oops, I mean students, should student loans be issued at interest rates north of 8%? (Some private student loans are already in the range of 8%; where will those go if inflation is recognized as running at 7% per year?) 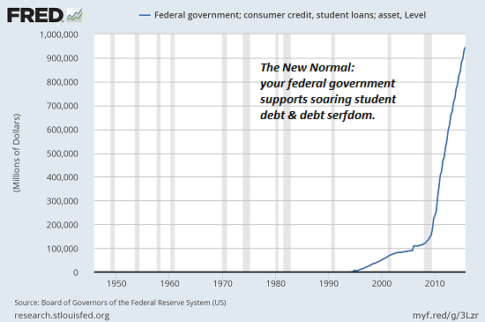 The grim reality is that real inflation is 7+% per year, and this reality must be hidden behind bogus official calculations of inflation as this reality would collapse the entire status quo. Super-wealthy elites earning 10+% yields on stock, bond and real estate portfolios aren’t particularly impacted by 7% inflation; their real wealth continues to expand nicely.

Who’s being destroyed by 7+% real inflation? Everyone whose income has stagnated and everyone who depends on wages rather than assets to get by–in other words, the bottom 95%.