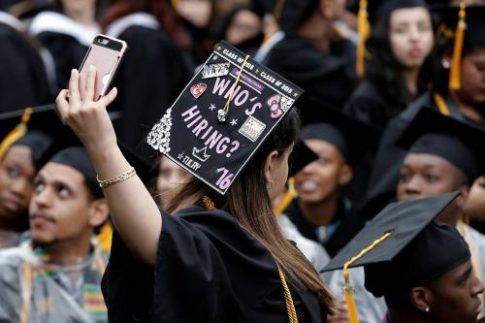 – A Half Of Millennials Live Paycheck To Paycheck, Most Don’t Think They Will Ever Be Millionaires:

In a stark refutation of Obama’s “recovery” narrative, most millennials don’t see a bright future for their personal finances.

Take the case of Shaun Luberski, a 21-year-old recent graduate of Temple University, who is skeptical she will be able to save $1 million by the time she retires. Ms. Luberski landed a full-time job as an account coordinator at Philadelphia magazine and works various side jobs in marketing and promotions.

A big problem plaguing Shaun and millions of her peers: student loans. She lives at home rent-free with her parents in Levittown, Pa. But with roughly $30,000 in student loans to pay back, she isn’t sure she will ever be a millionaire.

“I hate my student loans,” she says. Because of them, she says she isn’t able to move out as soon as she would like and needs to carefully monitor how much she is spending each month on expenses such as Uber rides and meals out.

Which is odd, considering recently the White House was praising the “boon” to the economy that $1.3 trillion in student loans represents. No, really: the conclusion of the study was that “The main macroeconomic impact of student loans, particularly over the longer run, is via the boost to output and productivity form a more educated workforce.” Perhaps not.

Sarcasm aside, Luberski is not alone: according to a study by market-research firm GfK, most millennials say they are skeptical they will ever be millionaires, a finding which according to the WSJ “reflects the tough job market and high student debt many young adults started their working lives with.”

Wait, what tough job market? Hasn’t the Obama administration also been pounding a narrative according to which the job situation is impeccable and the only “problem” with the current job market is that there are too many job openings and not enough qualified candidates. The fact that millions of students are raking up billions in student loans is precisely to make them more qualified to get those hard to get jobs. Just where are those hundreds of billions in loan proceeds going?

While it is unclear just who believes any of the economic stories spewed forth by the US president, what is clear is that 64% of working millennials say they will never accumulate $1 million in retirement savings over their lifetime, according to study released Wednesday. The study was conducted online between April 11 and April 26, 2016, by market-research firm GfK and surveyed more than 1,000 U.S. adults between the age of 22 and 35. Participants needed to be employed (not in the financial services/banking industry) and a U.S. resident for at least three years.

So why are most Millennials so quick to dismiss the “recovery” narrative? Low incomes, the gender wage gap and college loans are some of the reasons for millennials’ lack of optimism, according to the WSJ.

“There are some real headwinds facing this generation,” says Joe Ready, director of institutional retirement and trust for Wells Fargo. Those headwinds are heightened for millennials who earn low incomes and who aren’t working in their preferred career, he says.

Keep in mind, Millennials are now America’s biggest generation. They now are also its most disenchanted.

Worse, according to the study 54% of millennial women reported they live paycheck-to-paycheck compared with 43% of men. Millennial men report a median personal income of $39,100 compared with $28,800 for women.

There is a sliver of silver lining, with 59% of Millennial respondents saying they have started saving, however that brings us to even more bad news – it won’t be enough. The report finds that millennials who have started to save for retirement, 44% report they are saving 1% to 5% of their income, 33% are saving 6% to 10% of their income and only 6% are saving 11% to 14%, which is the minimum amount they need to save to attain the desired 7-figure retirement amount.

And so, with such a bleak future to look forward to, we can understand why an entire generation’s most merkatble skill is making selfies. Hopefully the next administration will think of ways to make that into a lucrative career.