What Donald Trump has proclaimed the worst deal ever made, may just have become worst-er. The shocking truth behind the US-Iran nuclear deal, as WSJ reports, is that John Kerry and the Obama Administration airlifted $1.7bn of cash in ‘compromise’ payments (read – bribe) to Tehran to ensure the release of 4 captured sailors coincidentally the same weekend as the signing of the nuclear deal. 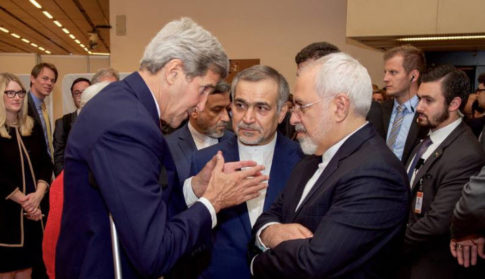 With all the chatter of helicopter money as solution to the western world’s economic ills,The Wall Street Journal’s Jay Solomon and Carol Lee expose, it appears The Obama Administration is already busily dropping cash where ever it needs things done in a hurry…

Wooden pallets stacked with euros, Swiss francs and other currencies were flown into Iran on an unmarked cargo plane, according to these officials. The U.S. procured the money from the central banks of the Netherlands and Switzerland, they said.

The money represented the first installment of a $1.7 billion settlement the Obama administration reached with Iran to resolve a decades-old dispute over a failed arms deal signed just before the 1979 fall of Iran’s last monarch, Shah Mohammad Reza Pahlavi.

The settlement, which resolved claims before an international tribunal in The Hague, also coincided with the formal implementation that same weekend of the landmark nuclear agreement reached between Tehran, the U.S. and other global powers the summer before.

“With the nuclear deal done, prisoners released, the time was right to resolve this dispute as well,” President Barack Obama said at the White House on Jan. 17—without disclosing the $400 million cash payment.

Of course, senior U.S. officials denied any link between the payment and the prisoner exchange. They say the way the various strands came together simultaneously was coincidental, not the result of any quid pro quo.

But U.S. officials also acknowledge that Iranian negotiators on the prisoner exchange said they wanted the cash to show they had gained something tangible.

Sen. Tom Cotton, a Republican from Arkansas and a fierce foe of the Iran nuclear deal, accused President Barack Obama of paying “a $1.7 billion ransom to the ayatollahs for U.S. hostages.”

“This break with longstanding U.S. policy [not to] put a price on the head of Americans, and has led Iran to continue its illegal seizures” of Americans, he said.

Since the cash shipment, the intelligence arm of the Revolutionary Guard has arrested two more Iranian-Americans. Tehran has also detained dual-nationals from France, Canada and the U.K. in recent months.

Perhaps most ironically, the Iranians did not want US Dollars…

The $400 million was paid in foreign currency because any transaction with Iran in U.S. dollars is illegal under U.S. law. Sanctions also complicate Tehran’s access to global banks

The Obama administration has refused to disclose how it paid any of the $1.7 billion, despite congressional queries, outside of saying that it wasn’t paid in dollars. Lawmakers have expressed concern that the cash would be used by Iran to fund regional allies, including the Assad regime in Syria and the Lebanese militia Hezbollah, which the U.S. designates as a terrorist organization.

Mr. Kerry and the State and Treasury departments sought the cooperation of the Swiss and Dutch governments. Ultimately, the Obama administration transferred the equivalent of $400 million to their central banks. It was then converted into other currencies, stacked onto the wooden pallets and sent to Iran on board a cargo plane.

On the morning of Jan. 17, Iran released the four Americans: Three of them boarded a Swiss Air Force jet and flew off to Geneva, with the fourth returning to the U.S. on his own. In return, the U.S. freed seven Iranian citizens and dropped extradition requests for 14 others.

We leave it to Sen. James Lankford (R., Okla.) to conclude:

“President Obama’s…payment to Iran in January, which we now know will fund Iran’s military expansion, is an appalling example of executive branch governance,… Subsidizing Iran’s military is perhaps the worst use of taxpayer dollars ever by an American president.”

And now comes the big test of the mainstream media in America – can they stop discussing Trump and Khizr Kahn for long enough to question the deliberate obfuscation of facts in yet another foreign policy snafu by the administration?