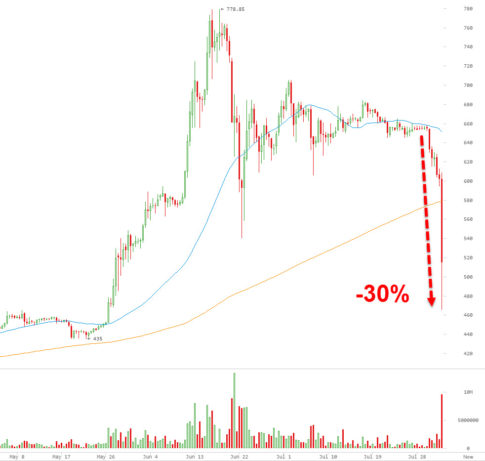 Bitcoin prices are crashing on extremely heavy volume  – down over 30% in the last 2 days – after Hong Kong-bassed Bitcoin exchange Bitfinex halted all trading after it discovered a security breach. As CryptoCoinsNews reports, the theft of 119,756 bitcoins has now been conclusively confirmed which makes it the largest theft in bitcoin’s space since MT Gox.

Representatives from the exchange told CoinDesk engineers were seeking to uncover issues at press time, though the company had confirmed roughly 120,000 BTC (more than $60m) has been stolen via social media.

Today we discovered a security breach that requires us to halt all trading on Bitfinex, as well as halt all digital token deposits to and withdrawals from Bitfinex.

We are investigating the breach to determine what happened, but we know that some of our users have had their bitcoins stolen. We are undertaking a review to determine which users have been affected by the breach. While we conduct this initial investigation and secure our environment, bitfinex.com will be taken down and the maintenance page will be left up.

The theft is being reported to—and we are co-operating with—law enforcement.

As we account for individualized customer losses, we may need to settle open margin positions, associated financing, and/or collateral affected by the breach. Any settlements will be at the current market prices as of 18:00 UTC. We are taking this necessary accounting step to normalize account balances with the objective of resuming operations. We will look at various options to address customer losses later in the investigation. While we are halting all operations at this time, we can confirm that the breach was limited to bitcoin wallets; the other digital tokens traded on Bitfinex are unaffected.

We will post updates as and when appropriate on our status page (Bitfinex.statuspage.io) and on the maintenance page. We are deeply concerned about this issue and we are committing every resource to try to resolve it. We ask for the community’s patience as we unravel the causes and consequences of this breach.

The bulk of the selling occurred once the statement had been issued. 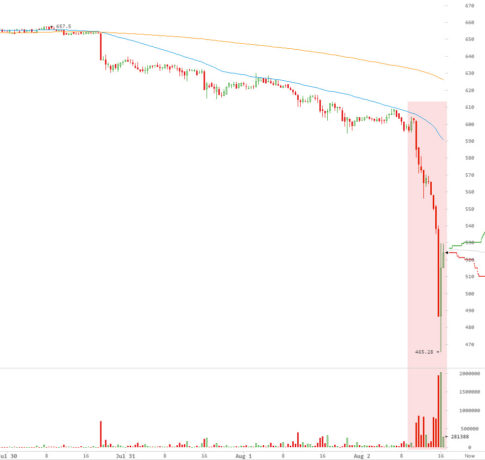 As CryptoCoinsNews adds, Bitfinex has, however, been experiencing numerous problems over the past few months, leading to an unexpected freezing of trading on at least two occasions, both of which caused a crash in bitcoin’s price by almost $100 in each instance.

Bitfinex was also fined by CFTC $75,000 “for offering illegal off-exchange financed retail commodity transactions and failing to register as a futures commission merchant,” in early June, but Zane Tackett, Director of Community and Product Development at Bitfinex, strongly denied any connection between previous outages and CFTC’s fine.