– If You Disagree With This Harvard Economist You May Be Stupid And A Racist:

Shocked by the inexplicable realization that Americans are stubbornly unwilling to bow down and blindly accept the political and economic views of the educated elites in this country, Harvard Professor Gregory Mankiw recently took to the New York Times to pen an op-ed where he concluded that the only possible reason for the lack of conformity to his point of view is the stupidity and racism of the electorate.  An article by Adam Button at forexlive, called our attention to the recent op-ed which he described as a “dazzling display of contempt for the public from a Harvard professor who can’t believe that voters aren’t listening to the gospel of the economic elites.”

“The first is isolationism more broadly. Trade skeptics tend to think, for example, that the United States should stay out of world affairs and avoid getting involved in foreign conflicts.  They are not eager for the United States to work with other nations to solve global problems like hunger and pollution.”

“The second is nationalism. Trade skeptics tend to think that the United States is culturally superior to other nations. They say the world would be better if people elsewhere were more like Americans.”

“The third is ethnocentrism. Trade skeptics tend to divide the world into racial and ethnic groups and think that the one they belong to is better than the others. They say their own group is harder working, less wasteful and more trustworthy.”

In summary, Professor Mankiw concludes that “…isolationist, nationalist, ethnocentric worldview is related to one’s level of education…the more years of schooling people have, the more likely they are to reject anti-globalization attitudes.”  So if we understand Professor Mankiw correctly, we disagree with him because we’re stupid, and because we’re stupid we’re also necessarily racist.  Got it.

Lest you think that Mr. Mankiw only holds contempt for American dissenters, he points out that the British people are stupid and racist as well:

We’re happy to note that Mr. Mankiw did find some cause for optimism, noting that populations tend to grow smarter over time.  If we’re lucky, hopefully our offspring can all reach the level of enlightenment of Professor Mankiw, though it will probably take another 100-200 years, or so.

“In the long run, therefore, there is reason for optimism.  As society slowly becomes more educated from generation to generation, the general public’s attitudes toward globalization should move toward the experts.  The short run in which we find ourselves now, however, is another story.”

Frankly, we’re happy that Professor Mankiw is drawing attention to the infallible intellect of our our ivy league educated economic and political elite.  Given the horrific record of the Fed in recent years, creating bubble after bubble while laying ruin to global economies, we think the Fed could benefit from some smart people like Professor Mankiw. 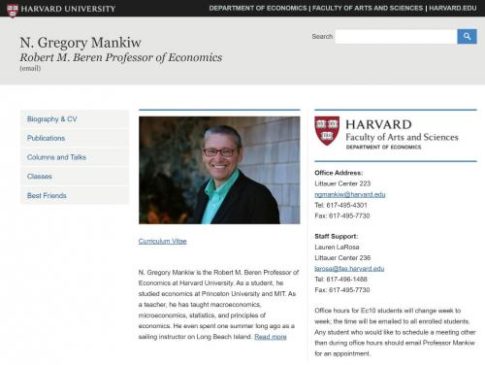