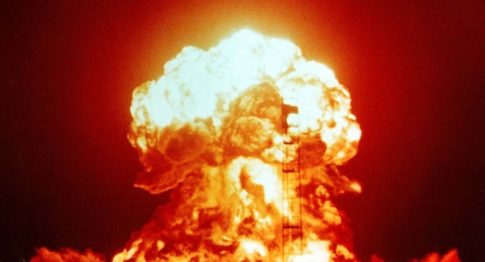 – Clashes in Kashmir Risk Taking India-Pakistan Back to Brink of Nuclear War:

The long ignored suffering of the Kashmiri people carries with it the world’s greatest risk of full-scale nuclear war between two long-standing adversaries.

Tensions have reemerged in the disputed territory of Kashmir, a Muslim-dominated region that has long been controlled by India, but whose population longs to be reunited with their brethren in Pakistan exacerbating longstanding tensions between the two nuclear powers.

Ten years ago, Pakistan and India stepped away from the abyss, after decades of warring over the territory, by deciding in principle to dissipate tensions and allowing the free movement of people and goods across the line of control.

The win-win agreement would have seen the two countries withdraw one million soldiers from Kashmir and administer the territory jointly providing residents more autonomy as progress moved towards a final resolution – but it never happened with then leader Pervez Musharraf attempting to flex his leverage with the Bush administration over the fight against al-Qaeda by stepping away from the table not realizing at the time that he was playing his hand too deep.

Apart from brinksmanship, Musharraf faced another staggering and unexpected challenge when he called on militant Islamist groups occupying Kashmir to disband and demobilize in 2003 to facilitate the diplomatic process – these militants turned into al-Qaeda affiliate Lashkar-e-Taiba that turned its weapons on the people of Mumbai.

The situation in Kashmir today is now as dire as it was when over a million soldiers were always a hair-string trigger way from turning the territory into one of the world’s worst conflict zones. Since July 8, when a popular young Muslim rebel Burhan Wani was killed in a gunfight with Indian security forces, the Kashmiri people have erupted in anger with demonstrations leading to at least 42 killed, hundreds blinded, and some 3,500 people injured.

Today, Pakistan’s Prime Minister Nawaz Sharif aspires to take back control of Kashmir from India, the granting of which many historical scholars deem a tragic mistake by British administrators.

In 1947, the disastrous partition of India administered by Lord Mountbatten, a friend of India’s founder Jawaharlal Nehru, stripped Pakistan of a future by separating it into two parts – East and West Pakistan – separated by over a thousand miles of India’s territory. The partition itself resulted in the death of some 1 million people and years later, after a bloody war and another 1 million people killed, East Pakistan ultimately became what is known as Bangladesh.

There were other mistakes in the map making process – Mountbatten looked to divide the pieces by Muslims majority areas and Hindu majority areas. Kashmir, however, has always been dominated by the Islamic faith which is espoused by some 70% of the population.

The resource rich territory, a land dispute that also comes with treasures and minerals, sits at the hard of the sibling rivalry between the two countries. With the Kashmiris now clamoring for change, Pakistani Prime Minister Nawaz Sharif’s government now seems set on reigniting a nuclear standoff against its long-time rival calling on the people in Kashmir to agitate, demonstrate, and wave Pakistan’s flag.

Pakistan and India now sit on roughly 120 nuclear warheads each – enough to eradicate life from earth several times over – and if the 1989-2002 conflict between the two countries, a violent cycle that led to at least 50,000 deaths according to Human Rights Watch and as many as 90,000 dead Kashmiri Muslims according to retired Congressman Edolphus Towns (D-NY), is any indicator then the situation could escalate rapidly towards a doomsday scenario.