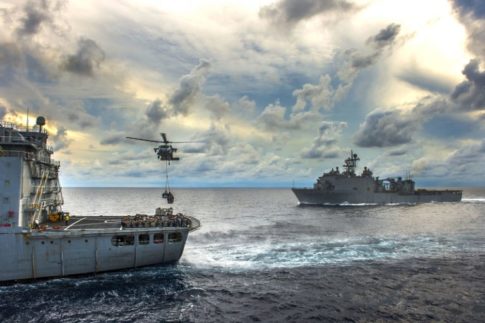 – …Meanwhile, All Hell Has Broken Loose in the South China Sea:

The failed Turkish coup. The Nice attack. The RNC and DNC. There is no shortage of headline-grabbing news stories to keep you occupied during this summer of rage.

But while your attention is elsewhere, huge moves are afoot in the Asia-Pacific. Specifically, those moves are afoot in the South China Sea, where the Permanent Court of Arbitration handed down a long-awaited ruling last week in favor of the Philippines in their long-running dispute over territorial waters with China. The court, operating under the arbitration provisions of the United Nations Convention on the Law of the Sea, ruled that China does not have “historical rights” to the waters in question and that their reclamation activity in the area has already caused irreparable environmental damage and should stop immediately. China promptly rejected the ruling exactly as they said they would.

This might sound like dry, legalistic stuff, but it’s not. This dispute is a window into the simmering tensions that are ready to boil over in the region if and when the US makes its long-awaited, much-ballyhooed “Asia-Pacific pivot” (i.e. when Clinton is inaugurated by the voting machines this November).

To get an idea where this is all headed, just ask Dennis Blair. He’s the former Director of National Intelligence and retired Navy admiral who just told a Congressional committee that the US needs to be ready for a military confrontation with China over this dispute. That’s bold talk in the realm of diplomacy, where people like Hillary campaign advisor Kurt Campbell usually opine mealy-mouthed political doublespeak like “I think over time China will start to adjust its position, because they will realize it’s not in their best strategic interests.”

The real question here is what, precisely, will trigger the US-Philippines Mutual Defense Treaty, which calls for a military response to any armed attack “on the island territories under [each member’s] jurisdiction in the Pacific or on its armed forces, public vessels or aircraft in the Pacific.” Will the Philippines invoke the treaty if China continues its development of the Spratly islands? And would the US respond? The answer so far is a resounding…silence. No one wants to say, because no one wants to draw that big red line when China shows no signs of abiding by it. 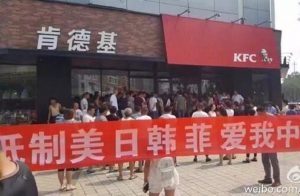 If there is a point of moderation in this potential conflict, it’s that Philippine President Rodrigo Duterte is interested in reviving flagging Sino-Filipino relations, but even there he’s hamstrung by his own population. A 2014 Pew poll found fully 93% of Filipinos are worried about China’s encroachment on the South China Sea and the possibility of military conflict.

Meanwhile China, for its part, is mulling the creation of an Air Defense Identification Zone in the South China Sea requiring any air traffic to first notify China before entering the air space over the waters. Oh, and Chinese citizens are smashing their iPhones and protesting outside KFC locations as a backlash against perceived American interference in China’s territorial disputes.

To make matters worse, tensions are still high in the East China Sea, where Chinese and Japanese fighter jets are coming perilously close to actual dogfights. Indeed, each year there seems to be a fresh pronouncement that Japan has scrambled a record number of fighters to intercept Chinese jets over their airspace. 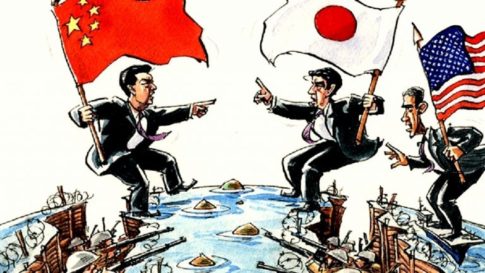 And now that Prime Minister Abe’s coalition has just achieved the supermajority it needs to amend the constitution, many are worried that Japan is about to remove the mask of pacificism and convert its “Self-Defense Force” into the military threat it really is. Such a move would only add more fuel to the fire of military tension between Japan and its regional rival.

So just in case you’ve forgotten about the Asia-Pacific in the 24/7 news cycle of trauma we’ve been experiencing lately, don’t fret; it’s still there, and it’s still a tinderbox. Let’s just hope no one lights the match.