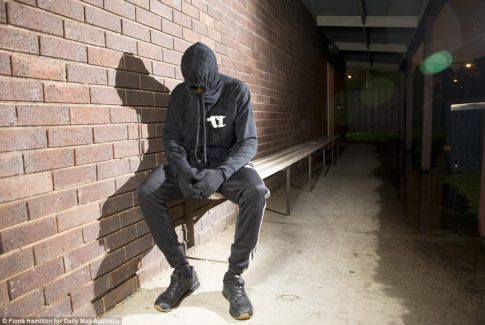 – EXCLUSIVE: ‘It’s get rich or get robbed. You don’t want to be left behind’: Founding member of Apex gang terrorising Melbourne reveals for the first time why hundreds of African youths set out to ‘f*** things up’:

A founding member of Melbourne’s notorious Apex gang has opened up on the African group’s spiral into serious crime – from taking cars for cheap thrills to seeing a victim cough up $25,000 to save himself from being ‘rolled’ by members.

John*, 21, spoke exclusively to Daily Mail Australia and said the gang was about ‘standing up, and making a name for themselves’.

‘It is get rich or get robbed, you don’t want to be the one left behind,’ he said.

John said the gang met up frequently as a way to escape their boring lives.

‘We don’t go out with the intention of hurting people but it can happen.’

The gang started in 2013 in Hamilton Park in Melbourne’s south-east – not on Apex Street like the name suggests – but they chose the name for its easy pronunciation as the founding members learned English as a second language.

‘We just like the name “Apex”, it has nothing to do with the street in Dandenong like everyone says,’ John said.

‘There are a lot of streets called that on Melbourne. We thought it was catchy and it was easy to say so we started using it.’

The gang ‘just wanted to go partying and f*** things up’, John, who arrived in Australia from Sudan in 2002, told Daily Mail Australia.

‘But then last year it escalated and when we would see people walk down the street we would just take their bags,’ he said.