In a dramatic example of the extreme polarization between the left- and right-leaning American public, a ‘brawl’ broke out between famous left-wing host of “The Young Turks” Cenk Uygur and controversial conservative Alex Jones (of InfoWars) on the sidelines of the Republican National Convention. The contretemps was caught on tape in Media Row at the GOP convention, but as The Hill reports, it’s unclear from the video what exactly they were arguing about beyond name-calling – “anti-liberal,” “bitch,” “hatchet man,” “liar” – and a suggestion that Uygur doesn’t talk enough about Saudi Arabia.

Uygur, the host of a popular left-wing web video show, called Stone a “piece of crap” and “the biggest liar in media.”

InfoWars founder Jones stood over Uygur on the show’s set, holding a microphone, gesticulating in the progressive host’s face and urging him to debate Stone.

The fight happened on Media Row at the GOP convention in Cleveland. Security had to intervene.

A young woman in a red dress began shouting at Jones, “Get off the stage, you fat fuck… Shut the f— up, bitch.” 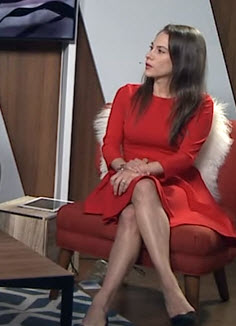 We are sure next week’s DNC will do nothing but further inflame the widening chasm between the left and the right, the ‘rich’ and the ‘poor’, the ‘gay’ and the ‘straight’, and the ‘black’ and the ‘white’ as America’s fake culture wars continue.