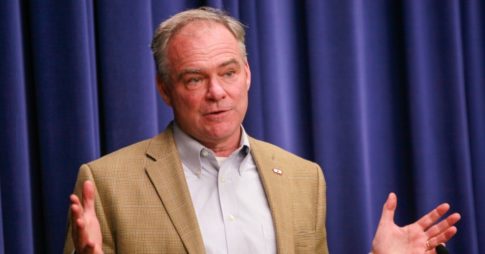 Sounding another alarm for progressives wary of the Democratic establishment’s support for Wall Street, the man said to be leading the pack of potential Hillary Clinton running mates – Virginia Sen. Tim Kaine – has just this week sent a clear message to big banks: He’s in their corner.

Kaine, who is reportedly Bill Clinton’s favorite for the vice presidential slot, signed onto two letters on Monday pushing for financial deregulation – letters that show the Clinton camp “how Kaine could be an asset with banking interests on the fundraising trail,” according to David Dayen at The Intercept on Wednesday.

“Let’s be really clear: It should be disqualifying for any potential Democratic vice presidential candidate to be part of a lobbyist-driven effort to help banks dodge consumer protection standards and regulations designed to prevent banks from destroying our economy.”

The news should “disqualify” Kaine from the ticket, one prominent progressive group declared Thursday.

The first missive, signed by 16 Democrats and every Republican senator, calls on the Consumer Financial Protection Bureau (CFPB) to exempt community banks and credit unions from certain regulations.

While this seems benign, tailoring rules that exempt large classes of financial institutions leaves consumers vulnerable to deceptive practices. A rule of this type could allow community banks and credit unions to sell high-risk mortgages or personal loans without the disclosure and ability to pay rules in place across the industry.

The second letter (pdf) deals with even bigger regional institutions, as it is aimed at helping “major firms including Capital One, PNC Bank and U.S. Bank, all of which control hundreds of billions of dollars in assets,” according to the Huffington Post.

“This distinction is applied unevenly across regional institutions despite similar risk profiles, simply by virtue of an asset threshold,” the letter reads.

Or, as Carter puts it, translating the senators’ bottom line: “just because they’re big, doesn’t mean they should be regulated more closely.”

Kaine for VP provides “a perfect example of why the party needs to create policies and pick candidates who reflect the will of the voters, not the will of elites and special interests that the superdelegate system has come to embody.”

But in fact, Dayen points out, “[i]n an interconnected financial system, a large regional bank that gets into trouble has as much chance of creating ripple effects as a mega-bank. It’s unclear why they should be exempted from regulations deemed appropriate for all facets of the financial sector.”

On top of these salvos on behalf of the banking industry, the Huffington Post notes that Kaine did not sign onto a third letter sent Wednesday from 28 senators urging the CFPB to crack down on abusive payday lenders and in turn, protect consumers.

That all this took place while Kaine is presumably being vetted for VP “could show potential financial industry donors that he is willing to serve as an ally on their regulatory issues,” Dayen wrote, especially because Clinton has been pushed to the left by Bernie Sanders on Wall Street.

Given existing concerns around Kaine’s support for the Trans Pacific Partnership and other so-called “free trade” deals, plus his mixed record on reproductive rights and now new proof of his bending to bankers, it’s no wonder RootsAction co-founder and Bernie Sanders delegate Norman Solomon told Common Dreams on Wednesday that choosing the Virginia senator or someone like him “would be a very pronounced middle finger to the 13 million people who voted for Bernie.”

“Superdelegates are the embodiment of a system that is rigged in favor of the powerful at the expense of the powerless,” said Maine state representative Diane Russell, who originated an amendment to abolish superdelegates that will be taken up by the DNC Rules Committee on Saturday, “and there isn’t a more powerful industry in America than the big banks.”

And Democracy for America executive director Charles Chamberlain said in a statement Thursday:

“Let’s be really clear: It should be disqualifying for any potential Democratic vice presidential candidate to be part of a lobbyist-driven effort to help banks dodge consumer protection standards and regulations designed to prevent banks from destroying our economy.”

“Our presidential ticket cannot beat the billionaire bigot by simply being not-Donald Trump,” he added. “To win in November, our ticket needs to have an unquestionably strong record in the fight against income inequality, one of the defining issues of the 2016 election.”