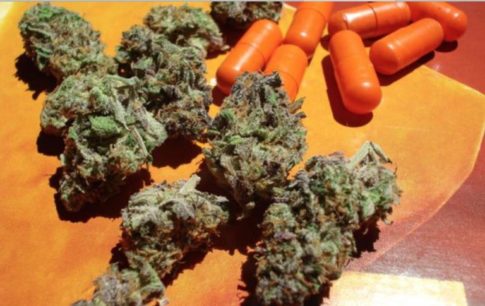 Former Federal Judge Nancy Gertner was appointed to the federal bench by Bill Clinton in 1994. She presided over trials for 17 years. And Sunday, she stood before a crowd at The Aspen Ideas Festival to denounce most punishments that she imposed.

Among 500 sanctions that she handed down, “80 percent I believe were unfair and disproportionate,” she said. “I left the bench in 2011 to join the Harvard faculty to write about those stories––to write about how it came to pass that I was obliged to sentence people to terms that, frankly, made no sense under any philosophy.”

She went on to savage the War on Drugs at greater length. “This is a war that I saw destroy lives,” she said. “It eliminated a generation of African American men, covered our racism in ostensibly neutral guidelines and mandatory minimums… and created an intergenerational problem––although I wasn’t on the bench long enough to see this, we know that the sons and daughters of the people we sentenced are in trouble, and are in trouble with the criminal justice system.”

– From the post: Federal Judge of 17 Years Repents – Compares Damage Done by “War on Drugs” to Destruction of World War II

Whenever an irrational and inhumane law remains on the books far longer than any thinking person would consider appropriate, there’s usually one reason behind it: money.

Unsurprisingly, the continued federal prohibition on marijuana and its absurd classification as a Schedule 1 drug is no exception. Thankfully, a recent study published in the journal Health Affairs shows us exactly why pharmaceutical companies are one of the leading voices against medical marijuana. It has nothing to do with healthcare and everything to do with corporate greed.

So is it a war on drugs, or a war on cheap medicine. Decide for yourself.

There’s a body of research showing that painkiller abuse and overdose are lower in states with medical marijuana laws. These studies have generally assumed that when medical marijuana is available, pain patients are increasingly choosing pot over powerful and deadly prescription narcotics. But that’s always been just an assumption.

Now a new study, released in the journal Health Affairs, validates these findings by providing clear evidence of a missing link in the causal chain running from medical marijuana to falling overdoses. Ashley and W. David Bradford, a daughter-father pair of researchers at the University of Georgia, scoured the database of all prescription drugs paid for under Medicare Part D from 2010 to 2013. 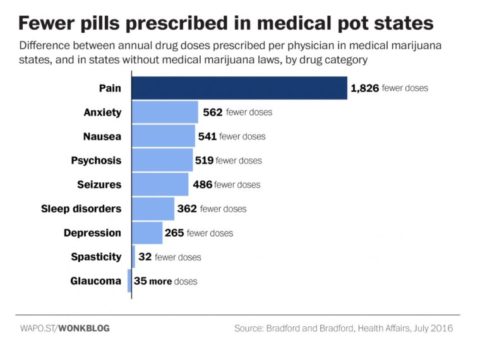 But most strikingly, the typical physician in a medical-marijuana state prescribed 1,826 fewer doses of painkillers in a given year.

The tanking numbers for painkiller prescriptions in medical marijuana states are likely to cause some concern among pharmaceutical companies. These companies have long been at the forefront of opposition to marijuana reform, funding research by anti-pot academics and funneling dollars to groups, such as the Community Anti-Drug Coalitions of America, that oppose marijuana legalization.

Pharmaceutical companies have also lobbied federal agencies directly to prevent the liberalization of marijuana laws. In one case, recently uncovered by the office of Sen. Kirsten Gillibrand (D-N.Y.), the Department of Health and Human Services recommended that naturally derived THC, the main psychoactive component of marijuana, be moved from Schedule 1 to Schedule 3 of the Controlled Substances Act — a less restrictive category that would acknowledge the drug’s medical use and make it easier to research and prescribe. Several months after HHS submitted its recommendation, at least one drug company that manufactures a synthetic version of THC — which would presumably have to compete with any natural derivatives — wrote to the Drug Enforcement Administration to express opposition to rescheduling natural THC, citing “the abuse potential in terms of the need to grow and cultivate substantial crops of marijuana in the United States.”

The DEA ultimately rejected the HHS recommendation without explanation.

DEA Agents Wrongly Jailed Student for 5 Days Without Food or Water Until He Had to Drink Own Urine; Nobody Fired

In what may be the most concerning finding for the pharmaceutical industry, the Bradfords took their analysis a step further by estimating the cost savings to Medicare from the decreased prescribing. They found that about $165 million was saved in the 17 medical marijuana states in 2013. In a back-of-the-envelope calculation, the estimated annual Medicare prescription savings would be nearly half a billion dollars if all 50 states were to implement similar programs.

One limitation of the study is that it only looks at Medicare Part D spending, which applies only to seniors. Previous studies have shown that seniors are among the most reluctant medical-marijuana users, so the net effect of medical marijuana for all prescription patients may be even greater.

Naturally, any sane society would immediately declassify marijuana as a Schedule 1 drug. Unfortunately, we do not live in a sane society.

Meanwhile, since we’re already on the topic of the disastrously idiotic “war on drugs,” let’s examine another egregious example of how it’s abused in order to unnecessarily ruin countless lives across America.

Prepare to be outraged.

The officer asked Wilson to step out of the car. Wilson complied. The officer leaned in over the driver’s seat, looked around, then called to his partner; in the report Officer Duc Nguyen later filed, he wrote that he saw a needle in the car’s ceiling lining. Albritton didn’t know what he was talking about. Before she could protest, Officer David Helms had come around to her window and was asking for consent to search the car. If Albritton refused, Helms said, he would call for a drug-sniffing dog. Albritton agreed to the full search and waited nervously outside the car.

Helms spotted a white crumb on the floor. In the report, Nguyen wrote that the officers believed the crumb was crack cocaine. They handcuffed Wilson and Albritton and stood them in front of the patrol car, its lights still flashing. They were on display for rush-hour traffic, criminal suspects sweating through their clothes in the 93-degree heat.

At the police academy four years earlier, Helms was taught that to make a drug arrest on the street, an officer needed to conduct an elementary chemical test, right then and there. It’s what cops routinely do across the country every day while making thousands upon thousands of drug arrests. Helms popped the trunk of his patrol car, pulled out a small plastic pouch that contained a vial of pink liquid and returned to Albritton. He opened the lid on the vial and dropped a tiny piece of the crumb into the liquid. If the liquid remained pink, that would rule out the presence of cocaine. If it turned blue, then Albritton, as the owner of the car, could become a felony defendant.

Helms waved the vial in front of her face and said, “You’re busted.”

Albritton was booked into the Harris County jail at 3:37 a.m., nine hours after she was arrested. Wilson had been detained for driving without a license but would soon be released. Albritton was charged with felony drug possession and faced a much longer ordeal. Already, she was terrified as she thought about her family. Albritton was raised in a speck of a town called Marion at the northern edge of Louisiana. Her father still drove lumber trucks there; her mother had worked as a pharmacy technician until she died of colon cancer. Albritton was 15 then. She went through two unexpected pregnancies, the first at age 16, and two ill-fated marriages. But she had also pieced together a steady livelihood managing apartment complexes, and when her younger son was born disabled, she worked relentlessly to care for him. Now their future was almost certainly shattered.

She heard her name called and stepped forward to the reinforced window. A tall man with thinning hair and wire-rim glasses approached and introduced himself as Dan Richardson, her court-appointed defense attorney.

Richardson told Albritton that she was going to be charged with possession of a controlled substance, crack cocaine, at an arraignment that morning. Albritton recalls him explaining that this was a felony, and the maximum penalty was two years in state prison. She doesn’t remember him asking her what actually happened, or if she believed she was innocent. Instead, she recalls, he said that the prosecutor had already offered a deal for much less than two years. If she pleaded guilty, she would receive a 45-day sentence in the county jail, and most likely serve only half that.