Long thought to be extinct, the Colli Albani Volcanic District, located just 19 miles (30 km) from downtown Rome, is waking up. 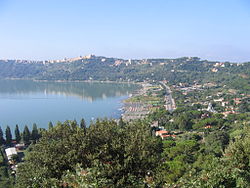 Using ground-based observations of rising land, earthquake swarms and steam vents along with satellite data to track Colli Albani’s activity, a team of researchers says the complex is overdue for an eruption.

The activity includes a  four-year earthquake swarm that began in 1991, and more recently, a volcanic vent that opened near Rome’s Leonardo da Vinci-Fiumicino Airport in 2013,

Led by volcanologist Fabrizio Marra of the National Institute of Geophysics and Volcanology in Rome, the team published their findings in the journal Geophysical Research Letters.

Marra and others argue that eruptions at the complex recur approximately every 31,000 years.

Considering that the most recent eruption occurred 36,000 years ago, they think the Colli Albani might be ready for new eruptions.

But don’t start worrying just yet.

Marra told AGU that the eruption is not likely to happen for another 1,000 years.

Note: Volcano adventurer John Search does not consider this complex to be ‘extinct.’ Some 30 cm (12 inches) of uplift was measured at the Alban Hills from 1951 to 1991, says Search.

A volcano outside Rome, long thought extinct, is rumbling to life.
https://www.youtube.com/watch?v=0vtcIZ7HaqY