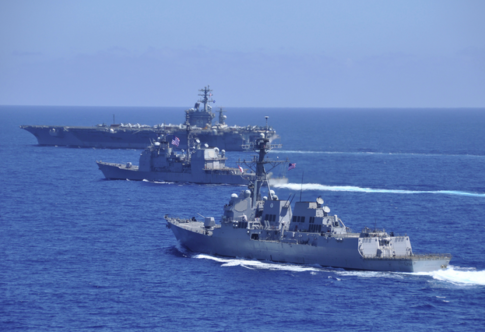 Territorial disputes are a delicate thing… and potentially deadly as well.

That’s why the U.S. is backing up its positions with an ever-increasing presence of warships  in the South China Sea.

China is very touchy about these territories, and unwilling to give up what they perceive as their waters, even as a UN tribunal just denied their claims and strengthened the U.S. hand.

Indeed, the entire situation is combustible and very dangerous.

As James Holbrooks of the Underground Reporter noted:

In a congressional hearing on Wednesday, former Director of National Intelligence and retired Navy admiral Dennis Blair told the panel that the United States should be prepared to use military force to oppose Chinese aggression in the South China Sea.

“I think we need to have some specific lines and then encourage China to compromise on some of its objectives,” Blair, who headed the U.S. Pacific Command while in the Navy, said at the hearing.

The admiral’s recommendation came the day after a United Nations tribunal invalidated China’s claim of territorial rights to nearly all of the waters in the South China Sea.

The U.S., citing the territorial dispute and security concerns raised by its allies in the region, have for months been sending warships into the South China Sea as a check against Chinese hostility.

Beijing, acutely aware of the military buildup off its coast, has publicly warned the U.S. it’s more than ready to defend against provocations. “China hopes disputes can be resolved by talks… but it must be prepared for any military confrontation.”

It seems that the situation is being deliberately stoked into conflict, and that tensions are programmed to reach a boiling over point. If true, there is no indication of where the point of no return would be.

The U.S. has the excuse of protecting its ally, and former territory, the Philippines, and thus has a pretext to play policeman in the region.

But in turn, that is only a thinly-veiled ruse to amplify the military pressure, and let bloated speech and menacing saber-rattling episodes set the tone for ‘diplomacy’ with the Red Dragon.

Now, there is not only an escalation, but an acknowledgement on both sides of the Pacific that things are headed towards war – and it is being openly discussed in those stark terms:

“If our security is being threatened, of course we have the right to demarcate a zone,” Vice Foreign Minister Liu Zhenmin said Wednesday at a briefing in Beijing. “We hope that other countries will not take this opportunity to threaten China and work with China to protect the peace and stability of the South China Sea, and not let it become the origin of a war.”

And war, it appears, is becoming increasingly likely by the day — with other countries in Southeast Asia beginning to take sides.

So, with the U.S. demanding compromise from a China who refuses to bow down — and forcing local powers to choose sides in the process — it seems the stage is being set for a potential military conflict in the South China Sea that could engulf the entire region.

Are we really to expect a looming world war from China, who has played the parts of villain, ally, trade partner and rival all at the same time?

No one can say, but there is plenty of worry that war could really happen. Even billionaire George Soros warned that the potential danger of WWIII breaking out with China was ‘not an exaggeration’:

The US government has little to gain and much to lose by treating the relationship with China as a zero-sum game. In other words it has little bargaining power. It could, of course, obstruct China’s progress, but that would be very dangerous. President Xi Jinping has taken personal responsibility for the economy and national security. If his market-oriented reforms fail, he may foster some external conflicts to keep the country united and maintain himself in power. This could lead China to align itself with Russia not only financially but also politically and militarily. In that case, should the external conflict escalate into a military confrontation with an ally of the United States such as Japan, it is not an exaggeration to say that we would be on the threshold of a third world war.

And yet, President Obama and numerous other U.S. officials have been deliberately stoking the tension and adding fuel to the fire with provocation in the disputed waters.

Barack Obama sent a guided missile destroyer into disputed waters in the South China Sea to see if the Chinese would start shooting at it. Yes, this is what he actually did. Fortunately for us, the Chinese backed down and did not follow through on their threats to take military action. Instead, the Chinese have chosen to respond with very angry words. The Chinese ambassador to the United States, Cui Tiankai, says that what Obama did was “a very serious provocation, politically and militarily.” And as you will see below, a state-run newspaper stated that China “is not frightened to fight a war with the US in the region”. So why in the world would Obama provoke the Chinese like this? Yes, the Chinese claims in the South China Sea are questionable. But there are other ways to resolve things like this.

Most Americans assume that an actual shooting war between the United States and China is not even within the realm of possibility, but many of our leaders see things very differently. For instance, just check out what CIA Deputy Director Michael Morell thinks…

The current posturing in the area has led to heightened tensions between the world’s preeminent military powers, and in May Former CIA Deputy Director Michael Morell told CNN that the confrontation indicates there is “absolutely” a risk of the U.S. and China going to war sometime in the future.

Not long ago, the U.S. also demonstrated ballistic missiles – armed with nuclear warheads – over the coast of California in an apparent demonstration towards China regarding the readiness and seriousness of their clash.

Though it isn’t on the front burner right now amid other sensational headlines, keep an eye to the fact that World War III is slowly being brewed on the back burner. Someday, it could ignite into a full blown nightmare. Stay vigilant. Hope for peace, prepare for war.