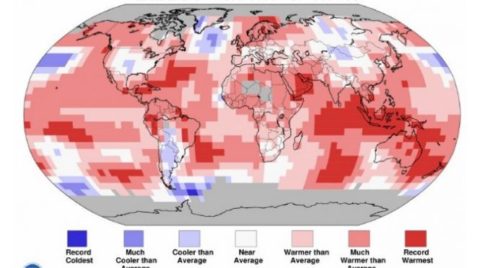 Look at this map from NOAA. It’s a powerful visualization, showing temperature variations around the globe. When you see all of that pink and red, it looks almost catastrophic.

And that’s how they’re conning us. As the old saying goes, a picture is worth a thousand words.

But when you take the time to look closely at that map, you will see that the vast majority of the heat is in the oceans.

Not on land, where we live, but in the oceans.

Look at the map, and you will see that temperatures were average during the month of May – or even colder than average – across large swaths of Europe, South America, Africa, and almost all of the United States and Russia.

“The most exceptional cold,” the article admits, “was in northeastern Canada which was 5 degrees Celsius below average (9 degrees Fahrenheit below average).”

So let me ask you: If humans are causing global warming, why doesn’t the majority of that heat show up on land, where we actually live?

Why? Because it has nothing to do with humans. It’s simply part of a naturally recurring cycle.

Remember, we’re now coming out of one of the three strongest El Niños on record.

El Niño is a natural – natural – warming of the central and eastern equatorial Pacific Ocean that, for reasons still not well understood, recurs every few years. (I think it has to do with underwater volcanic activity. but that’s a different story. See Not by Fire but by Ice, Chapter 10, “Fish Stew,)

Whatever the cause, that warming is not a result of human activity. El Niños have struck our planet over and over again for millions of years, long before our ancestors kindled their first fire or invented the horseless carriage.