I WAITED TO SAY THIS UNTIL IT COULD BE ABSOLUTELY PROVEN: NO BULLETS WERE EVER FIRED AT THE TRUCK:

UPDATE: DO NOT MISS THE NEW BULLET STICKER SET GRAPHIC THAT PROVES THEY REALLY DID USE BULLET STICKERS. IT IS PLACED BELOW THE PICTURES OF THE TRUCK. THEY USED SET NUMBER 3 ON THE WINDOWS.

INSTEAD, BULLET STICKERS WERE PUT ON THE TRUCK, AND I CAN PROVE IT. ALSO: If there really were dead bodies at the scene, they were thrown out the back of the truck, which was empty and inexplicably a refrigerated truck, “inexplicably”, of course, unless you needed to keep bodies fresh.

TAKE A LOOK AT THIS AND EXPLAIN IT! IN THE SECOND PICTURE, THE CAMERA ANGLE CAUGHT THE GLARE OFF THE SURFACE OF ONE OF THE BULLET STICKERS, AND THE GLARE WENT RIGHT ACROSS THE “BULLET HOLE!” 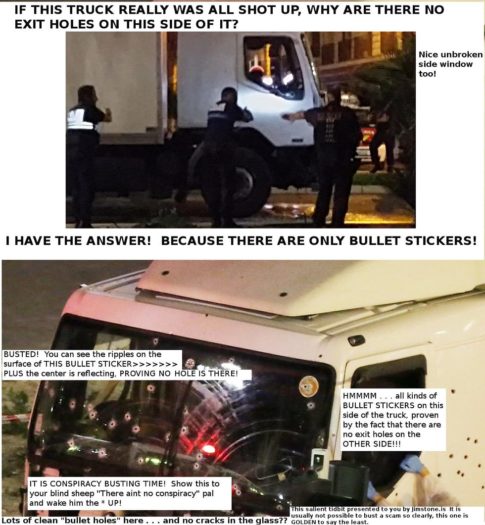 HERE ARE THE BULLET STICKER SETS. I FOUND THE ACTUAL SET. THEY USED THE “HOLLYWOOD” BULLET STICKERS THAT ARE IN THE BOTTOM SET FOR THE WINDOWS ON THE TRUCK.

Bandog surprised me with his message, where he still believed the bullet holes were real. But when you compare the windshield holes in THIS PICTURE and match them up with hollywood bullet set #3, MY GOSH WE HAVE A MATCH! 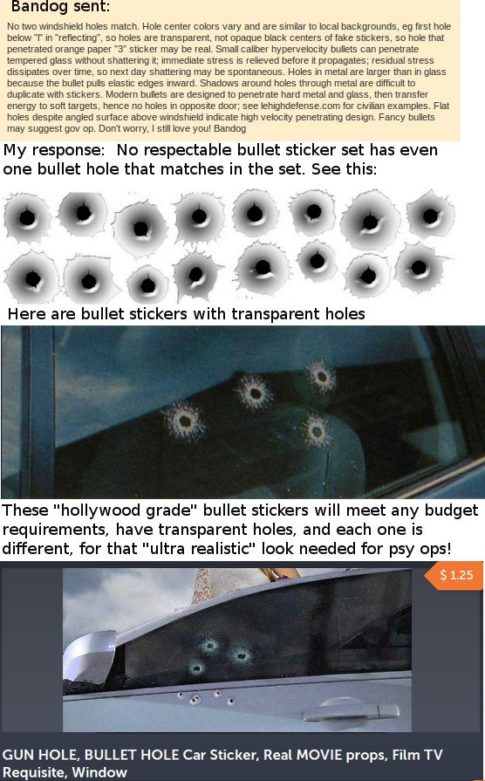 UPDATE: THE NEXT DAY THEY SMASHED THE WINDSHIELD, BECAUSE PEOPLE POINTED OUT THE LACK OF CRACKS. DO NOT BE FOOLED BY THIS, THE TRUCK PHOTOS ABOVE SHOW HOW IT REALLY WAS, WITH PERFECT CLARITY.

MORAL OF THE STORY: WHEN USING WINDOW STICKERS FOR A PSY OP, BE CAREFUL OF CAMERA ANGLES AND NEVER TAKE A PICTURE WHEN THERE IS GLARE ACROSS ONE OF THE STICKERS.

UPDATE: The truck driver rampage in France story has multiple gaping holes which I will briefly mention here: 1. No second party cell phone coverage despite 40,000 people present. Also nothing from people on balconies who were far enough away from the action to cover it with real cameras. 2. No first responders, relatives or anyone else with the dead bodies more than a half hour after the carnage started, with the truck sitting there with windows shot. NO FIRST RESPONDERS FOR OVER A HALF HOUR? NO POLICE MOB? EVEN LONG AFTER EVERYTHING WAS COMPLETELY SECURED? Just photo op bodies laying there. YEP. STAR WARS HAPPENED. It looked so real. I never saw an ambulance in Star Wars either.

-SORRY- breaking the window on the next day to support the hoax won’t cut it, when the cracks are not consistent with the “bullet holes”!. 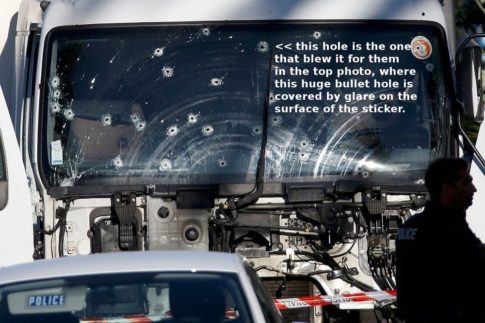 In some of the much much later videos and photos they show ambulances, but if it was a truck attack happening over a mile, then even a quarter mile away, where the people were hit, there should have been mobs of ambulances while this was going on. Yet there was not even one. How would bystanders or ambulances even know it was a terror attack? They would not have stayed away, they would have responded like normal. First responders should have been at the beginning of the scene in minutes, not over an hour later, especially since this supposedly happened at a major event, where first responders are staged and ready to go, EVERYWHERE. So they got blankets to cover the bodies, but no paramedics? HOAX!

My original post follows. It is different from what other people said, so I am leaving it as is to provide perspective in addition to discoveries others have made.

1 thought on “I WAITED TO SAY THIS UNTIL IT COULD BE ABSOLUTELY PROVEN: NO BULLETS WERE EVER FIRED AT THE TRUCK.”