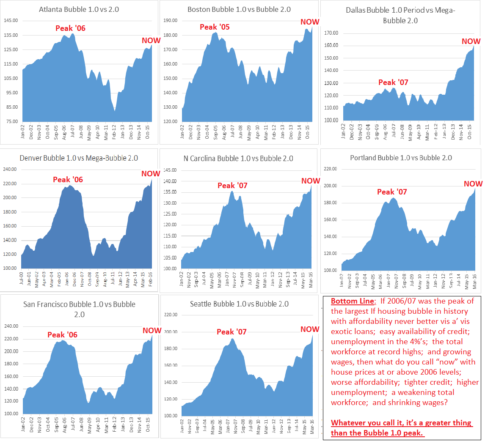 The mind-numbing Case-Shiller regional charts below are presented without too much comment. As MHanson.com’s Mark Hanson adds,the visual says it all.

Q:  If 2006/07 was the peak of the largest housing bubble in history with affordability never better vis a’ vis exotic loans; easy availability of credit; unemployment in the 4%’s; the total workforce at record highs; and growing wages, then what do you call “now” with house prices at or above 2006 levels; worse affordability; tighter credit; higher unemployment; a weakening total workforce; and shrinking wages?

A:  Whatever you call it, it’s a greater thing than the Bubble 1.0 peak.

1)  Funny (and Demented) Seattle area Realtor anecdote regarding the potential for another housing Bubble: “House prices can’t be in a bubble because they are only 10% greater than the 2006 peak, meaning growth of only 1% per year since 2006. And 1% per year is not the Bubble type gains we saw back in the mid-2000’s”.

DOH! How do you argue with that? You don’t, you just turn the other cheek and pound a drink.

Bottom line: If these key housing markets hit a wall they will take the rest of the nation with them; bubbles and busts don’t happen in “isolation”.

Not shown in these charts of absolute index levels is the three-straight months of national yy price gain deceleration. Moreover, the CS captures prices up to 7-months old at the tail so conditions are already a lot different than shown here.

3) Notes & Observations on above chart:

• The bubblicious regions above all have one thing in common…STEM. As such, if the tech and biotech sectors hit a wall, which some believe has already begun, so will these housing regions.

• If these key housing markets hit a wall they will take the rest of the nation with them; Bubbles and busts don’t happen in “isolation”.

• House prices have retaken Bubble 1.0 levels on the exact same drivers: easy/cheap/deep credit & liquidity that found its way to real estate. The only difference between both era’s is which cohorts controlled the credit and liquidity. In Bubble 1.0, end-users were in control. In this bubble, “professional”/private investors and foreigners are. But, they both drove demand and prices in the exact same manner. That is, as incremental buyers with easy/cheap/deep credit & liquidity, able to hit whatever the ask price was, and consequently — due to the US comparable sales appraisal process — pushed all house prices to levels far beyond what typical end-user, shelter-buyers can afford. Thus, the persistent, anemic demand.

• Bubble 2.0 has occurred without a corresponding demand surge just like peak Bubble 1.0. As such, it means something other than fundamental, end-user demand and economics is driving prices this time too.

• The end result of Bubble 2.0 will be the same as 1.0; a demand “mix-shift” and price “reset” back towards end-user fundamentals once the speculators finish up, or events force them to the “sidelines”.

• Lower prices will create demand, which the housing sector will always achieve one way or another…it’s what it does. Just like the anemic demand led the price crash of Bubble 1.0, which ultimately led to increased demand as prices stabilized lower.

• The Bubble 2.0 pop will also free up supply in the same manner as Bubble 1.0, just not as much from foreclosures. However, I do think people underestimate the volume of low-down mortgages originated over the past several years, and those with little to no equity in legacy loans or rising interest rate mods, which if house prices drop a few percent turn high-risk, especially when factoring in the 6%+ cost to sell. But, it doesn’t matter where the supply comes from — maybe the PE firms start to dump rentals — as it’s fungible.

• Sure the bubble could blow bigger. Maybe we get a double-bubble. Bubbles are strange things. But, when they begin to fall there is a lot of air under there because the downside has clearly been established.

• Lastly, I am betting 2016 marks the high for house prices, as mortgage rates can’t go meaningfully lower, the unorthodox demand cohort is exhausted, and real affordability to end-user shelter-buyers has rarely been worse. In fact, I believe this is the year house prices go red yy.