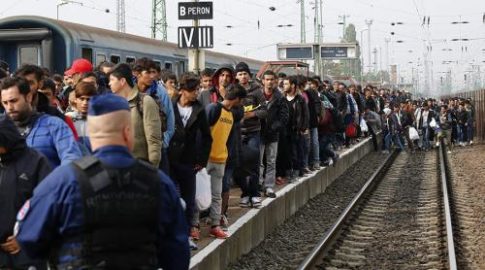 – Merkel Admits That Terrorists Were Smuggled In Europe’s “Refugee Flow”:

Following months of sternly refusing to accept that her “noble” initiative to open up Europe to over a million refugees from the middle east had adverse consequences in not only sending anti-immigrant parties soaring in the polls but also indirectly encouraging terrorism, German Chancellor Angela Merkel today admitted that some terrorists entered Europe among the wave of migrants that fled from Syria adding that the refugee flow was used in part to “smuggle terrorists” on to the continent.

Speaking to supporters of her Christian Democrat Union party in eastern Germany, Merkel admitted that militant groups had smuggled jihadists among those genuinely looking to seek asylum in Europe. “In part, the refugee flow was even used to smuggle terrorists,” she said, as cited by Reuters.

As a reminder, it was Merkel’s open-door policy which allowed more than 1 million migrants to arrive in Germany in 2015, with a number of those originating from Syria. Merkel was criticized by a significant section of the German population, culminating in a collapse in Merkel’s approval rating.

Merkel’s admission came just over a week after Germany’s spy chief Hans Georg Maassen said the domestic intelligence agency had obtained information on 17 IS militants who had entered Europe under the guise of refugees.

“There is strong evidence that… 17 people have arrived under Islamic State instructions,” Maassen said cited by RT.

In the same month, a plot emerged involving a group of Syrians linked to IS who wanted to carry out a terror attack in Dusseldorf. Two members of the four-man group planned to detonate suicide vests in the center of the western German city, while the other members would look to kill as many people in the vicinity with a combination of explosives and gunfire.

Three of the suspects were identified as 27-year-old Hamza C., 25-year-old Mahood B., and Abd Arahman AK, 31. They were arrested at various locations around Germany. Their plan was revealed when a fourth member, 25-year-old Saleh A., handed himself in to police in France in February.

“According to current investigations, the four accused were planning to commit an attack in Germany for the foreign terrorist organization Islamic State,” said the prosecutors, as cited by AFP.

Adding insult to Merkel’s ruinous refugee policy, the head of Germany’s police trade union, Rainer Wendt, said that budget cuts are potentially making it easier for terrorists to cross into the country amongst the refugee influx because it is impossible to screen all the migrants.

“It would have been useful in the second half of last year to create conditions for background checks on all people who came to us, in fact, before they traveled [to Germany]. But that is past history now, as we cannot afford it,” he told the news show SWRinfo.

The German authorities announced in June that they are monitoring 499 Islamic extremists who are deemed by the security services to pose a threat. Interior Ministry spokesman Johannes Dimroth said security agencies had received regular tip-offs about possible Islamic extremists coming to Germany as asylum seekers and were systematically checking those reports.

However, placing all migrants under suspicion after the arrests would play into IS’ hands, Wendt stressed.

“We know since the attacks of Paris and Brussels that Islamic State wants to influence the migration debate in Europe and to whip up sentiment against refugees,” Wendt told Reuters. “This is part of their strategy. We must not fall into their trap.”

Instead Germany had a “better” idea, which was to do nothing. And as shocking documents published by Germany’s Sueddeutsche Zeitung newspaper and broadcasters NDR and WDR, today revealed, the previous estimates of the infamous Cologne mass sexual assaults on New Year’s Even, were just dramatically revised — upward. As WaPo reports, authorities now think that on New Year’s Eve, more than 1,200 women were sexually assaulted in various German cities, including more than 600 in Cologne and about 400 in Hamburg.

More than 2,000 men were allegedly involved, and 120 suspects — about half of them foreign nationals who had only recently arrived in Germany — have been identified.

Only four have been convicted, but more trials are underway. In other words, Germany has absolutely no idea who it has admitted into its territory as a result of Merkel’s generosity that permitted more than 1 million migrants to enter Europe’s most prosperous nation.