– Yahoo Finance Editor-In-Chief Is Sad: “We’re Suffering The Consequences Of Too Much Democracy”:

Following James Traub’s mind-numbingly-elitist rebuttal of the democratic rights of “we, the people” in favor of allowing “they, the elite” to ensure the average joe doesn’t run with scissors, “It’s time for the elites to rise up against the ignorant masses.”

The Brexit has laid bare the political schism of our time. It’s not about the left vs. the right; it’s about the sane vs. the mindlessly angry…

The Guardian’s David Van Reybrouck appears willing to take the fight for elite survival even further…proclaiming “our voting system worked well for decades, but now it is broken. There is a better way to give voice to the people…. you do not ask everyone to vote on an issue few people really understand, but you draft a random sample of the population and make sure they come to the grips with the subject matter in order to take a sensible decision. A cross-section of society that is informed can act more coherently than an entire society that is uninformed.” 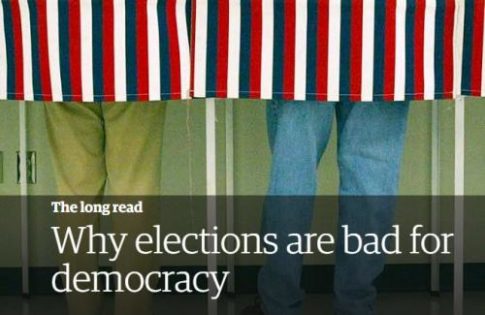 Brexit is a turning point in the history of western democracy. Never before has such a drastic decision been taken through so primitive a procedure – a one-round referendum based on a simple majority. Never before has the fate of a country – of an entire continent, in fact – been changed by the single swing of such a blunt axe, wielded by disenchanted and poorly informed citizens.

But this is just the latest in a series of worrying blows to the health of democracy, and Yahoo Finance Editor-in-Chief, Andy Serwer took to his Tumblr, to explain why, in his opinion, Democracy, you could argue, is pretty much like sunshine, cold beer and ice cream. They’re all great —until you have too much.

Too much democracy? That’s not possible, is it?

In fact it may be. Some economists and political scientists are suggesting as much in the wake of the Brexit vote and the subsequent wave of “Leave the EU” sentiment that’s sweeping across Europe. And you can look to a big honking use case right here in the US to make that argument.

It’s way too early to tell how Brexit will affect the economy of the UK at this point — although early days have been rocky enough with the crashing pound, stumbling stock market, and political chaos. But I would argue the biggest negative of Brexit will be the messiness and uncertainty that ensues. The UK will be forced to rewrite tax rules, as well as draft and implement new legislation. It will have to craft a new relationship with Europe. And the UK will more than likely haggle over referendums in Scotland and Northern Ireland. An OECD report says Brexit could cost the UK 3.3% of its GDP by 2020.

Despite those headaches and risks, “Leavers” across Europe — including those in France, the Netherlands, Italy, Hungary, Austria and Finland— have taken up the call. A Citibank note says “… political risks in Europe are high and probably rising, in our view, and ‘referendum risk’ contributes significantly to these risks …” Those risks include outright withdrawal from the EU, scuttling of EU policies, and shying away from EU-centric policies that could bolster local economies. Citi notes that Italy and Hungary will likely both have referendums on matters pertaining to the EU this year.

So what does this have to do with the US, besides the collateral damage of a potentially basket-case Europe — (no small thing that, by the way)? Because while referendums are actually rare in the UK, (the Brexit vote is only the third to cover the whole UK), they are much more common in the US.

Twenty-six states — mostly Western ones — plus Washington, D.C., allow for initiatives and referendums. And over the years, there have been various successes and failures, never mind wackiness. (One of my favorites was the 2006 Arizona Voter Reward Act which would give a single Arizona citizen $1 million in every general election. It was defeated.) But other ballot initiatives of course are more serious, and in some states referendums and such have had real teeth, nowhere more so than in California, where they have been elevated to a powerful form of governance, with high-profile propositions.

For those of you old enough to remember, the watershed moment of the California Proposition movement was 1978 with the passage of Proposition 13, which capped real estate taxes. (Remember Howard Jarvis — the leader of the movement — on the cover of Time Magazine: Tax Revolt!)

The success of that vote ushered in a golden age of referendums for the Golden State, although that may be a mischaracterization. Since then the state has voted on hundreds of referendums on gun control, abortion, marijuana and the death penalty. But mostly the initiatives have tended towards the fiscal: i.e., taxes, budgets and bond issues. To some this has been a shining era of democracy. Others are not so sanguine, saying Prop. 13, for example, helped lead to the gutting of education budgets.

One thing that is undoubtedly true is that this so-called direct democracy model has made governing more difficult. The Economist delved into this in great length in a 2011 special report:

“This citizen legislature has caused chaos. Many initiatives have either limited taxes or mandated spending, making it even harder to balance the budget. Some are so ill-thought-out that they achieve the opposite of their intent: for all its small-government pretensions, Proposition 13 ended up centralizing California’s finances, shifting them from local to state government. Rather than being the curb on elites that they were supposed to be, ballot initiatives have become a tool of special interests, with lobbyists and extremists bankrolling laws that are often bewildering in their complexity and obscure in their ramifications. And they have impoverished the state’s representative government. Who would want to sit in a legislature where 70-90% of the budget has already been allocated?”

The best evidence of the effects of this dysfunction perhaps is that during this period, California experienced a precipitous decline in its credit rating. In 1980, California had an AAA rating. By the early 1990s it had fallen to single A, and it bounced around that level for decades until as recently as 2014, when it was the second-lowest rated state in the nation. (This is a state, of course, with Silicon Valley, Hollywood, oil and gas, timber, minerals and the richest farmland in the nation.) Say what you will about Jerry Brown (twice!), Arnold Schwarzenegger and Pete Wilson, but it ain’t all the governors’ fault. In fact it may be Jerry Brown’s multiterm experience with government by referendum that has allowed him get a handle on the state’s finances and help boost its credit rating back up to AA (from S&P), its highest rating since 2001. But that’s hardly consolation.

Direct democracy does have a shining example of efficacy, and that is Switzerland, though there certainly are reasons particular to that country — homogeneity being one — that explain why it has worked there.

Otherwise, I would argue that direct democracy is best used sparingly, for local initiatives perhaps. A big drawback of direct democracy is that those who want change — no matter its validity — are much more fired up than those who want to maintain the status quo, and therefore many more of the “Changers” go to the polls, as was perhaps the case in the Brexit vote. Think about the consequences of that.

I know it sounds horribly anachronistic, but checks and balances, branches of government, and slow, messy and deliberate governance actually have their place. It is true that both in the case of Britain’s relationship with the EU and with real estate taxes in California in the 1970s, real change was needed. In cases like this, and probably just in general, politicians need to step up more briskly than they are typically comfortable doing. But putting the onus all back on the people may not be the answer. One thing’s for sure, it certainly has its consequences.

1 thought on “AND NOW: Yahoo Finance Editor-In-Chief Is Sad: “We’re Suffering The Consequences Of Too Much Democracy””