Additionally, the NSA has a copy of bloody everything.

– Senator Admits The FBI Is “About To Ask Putin For His Copies Of Hillary’s Emails”:

It is well known that the FBI still does not have roughly 30,000 emails that Hillary Clinton deleted from her private server due to Clinton categorizing them as personal and not work related. We have also reported that Russia may be in possession of those emails, and according to Judge Andrew Napolitano, there is a debate going on in the Kremlin about whether or not to release them.

Given that the FBI still doesn’t have the emails, Arkansas Republican Senator Tom Cotton (of the US is “under-incarcerated” fame), who is a Trump supporter and also serves on the Senate Intelligence Committee, has become so frustrated that Cotton suggests the FBI is about to ask Putin for his copies. Cotton also took a jab at Bill Clinton’s meeting with Loretta Lynch, saying that his plane was also on the tarmac, and he thought Bill Clinton may be waiting to climb on board to talk with him as well. 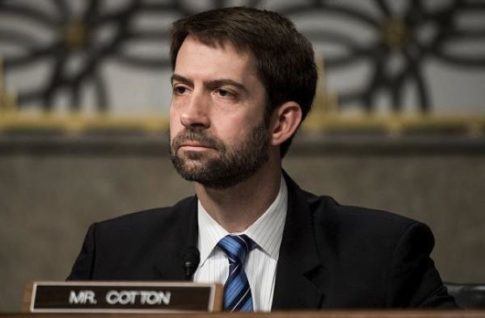 A combat veteran of Iraq and Afghanistan, Sen. Thomas Cotton (R.-Ark.) said he was glad to make it on time for his speech after a series of travel delays.

“We were on the tarmac, I thought Bill Clinton might be boarding my plane to talk to me,” said the former Army Airborne Ranger officer.

Cotton said it was shocking, but not shocking to him, that the former president would meet with Attorney General Loretta Lynch — whose department is investigating both his wife and himself for his handling of the Clinton Foundation.

Clinton’s decision to conduct all her official business on her own private email account on her own private server and the way she has handled official and media inquires about it was just teaser of how her administration will approach transparency and national security, Cotton said.

The FBI still does not have 30,000 emails the expected Democratic nominee for president claimed to have deleted.

“It has gotten so bad, the FBI is on the verge of asking Vladimir Putin for his copies of Hillary’s emails,” Cotton said.

In addition to the criminal nature of the former first lady scheme, he said, conducting official and classified business on an unsecured server exposed American national security to our enemies.

Americans should not be surprised that the former secretary of state would put America at risk, he said. Working with President Barack Obama, Clinton oversaw a foreign policy that treated allies as troublemakers and our enemies as victims with legitimate complaints about the United States. Chief among the enemies is the Islamic Republic of Iran, which Obama-Clinton empowered by lifting sanctions, thawing frozen assets, and ignoring Iran’s support of violent terrorism.

Truth be told, it may not be a bad idea.