– This Is What Loretta Lynch Said When Cornered About Her Clinton Meeting:

Having been forced to remove herself from the Hillary Clinton email probe, Loretta Lynch admitted that her shockingly ill-advised private meeting with Bill Clinton has “cast a shadow” over the investigations and questions on the meeting are “fair.” Her magnanimity was further expressed “I wouldn’t do it again,” while claiming that she had made the decision to ‘recuse’ herself days before her Bubba meeting.

The headlines of what she said:

As we detailed earlier, on Monday evening US Attorney General Loretta Lynch conveniently just happened to meet up with Bill Clinton for a private meeting on her plane on a Phoenix airport tarmac.

Despite Lynch promising everyone that the only things that were discussed were Bill’s golf game and grandchildren, conservative watchdog Judicial Watch requested that the DOJ’s Office of the Inspector General investigate the meeting. As The Hill reports, pressure is intensifying on Attorney General Loretta Lynch to hand off oversight of the federal investigation connected to Hillary Clinton’s private email server…

Calls for Lynch to step aside — which had already been simmering for months — appeared primed to boil over Thursday following the attorney general’s unscheduled, private meeting with Clinton’s husband, former President Bill Clinton.

“Considering the ongoing criminal investigation of Hillary Clinton, this secret meeting between the Attorney General and Bill Clinton shows an astounding lack of judgment by Loretta Lynch,” House Majority Whip Steve Scalise (R-La.) said in a statement on Thursday calling for Lynch to recuse herself.

“Given the culture of unaccountability in the Obama Administration, it is unlikely that Attorney General Lynch will heed the growing calls for her resignation,” he said. “But at a minimum, Lynch should immediately recuse herself from the Justice Department’s criminal investigation into Hillary Clinton’s unlawful activities, and appoint a special prosecutor to handle the case, so the American people can know the truth about this secret meeting and finally rest assured the criminal investigation of Hillary Clinton is being conducted fully and impartially, without even the appearance of corruption.”

And, now, as AP reports, a Justice Department official said that Loretta Lynch intends to accept whatever recommendation career prosecutors and federal agents make in the investigation into Hillary Clinton’s use of a private email server.

“The Attorney General expects to receive and accept the determinations and findings of the Department’s career prosecutors and investigators, as well as the FBI Director,” the official said, speaking on condition of anonymity because of the ongoing probe.

Lynch was expected to discuss the matter further at a summit Friday in Aspen, Colorado.

This revelation comes amid a controversy surrounding an impromptu private discussion that Lynch had aboard her plane on the tarmac at a Phoenix airport on Monday with Clinton’s husband, former President Bill Clinton. That get-together has been criticized as inappropriate by Republicans and some Democrats at a time when the Justice Department has been investigating whether classified information was mishandled through Clinton’s exclusive use of a private email server while she was secretary of state.

Lynch told reporters that she did and Bill Clinton did not discuss the email investigation during the encounter.

The announcement also appeared intended to assuage concerns, particularly among Republicans, that Lynch — a Democratic appointee — might overrule recommendations from the agents and prosecutors who have worked on the case. Disputes on charging decisions between the FBI and the Justice Department are not uncommon, particularly in national security cases, though many legal experts see any criminal prosecution in this matter as exceedingly unlikely.

Decisions on whether to charge anyone in the case will be made by “career prosecutors and investigators who have been handling this matter since its inception” and reviewed by senior lawyers at the department and the FBI director, and Lynch will then accept whatever recommendation comes, the official said.

So by releasing this statement does that mean that Lynch routinely overrides other case recommendations from the FBI and DOJ staff? Also, based on the fact that the FBI may very well leak the facts of the case if the DOJ doesn’t follow its recommendation, we will be able to learn whether or not Lynch is telling the truth. We won’t hold our breath. 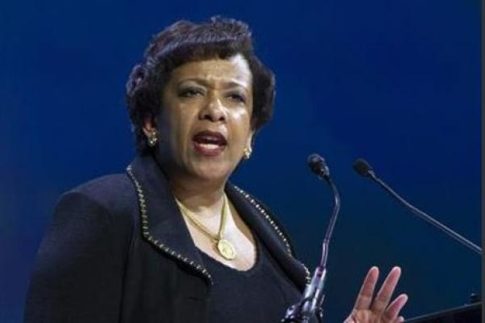 “I did not have email-probe-relations with that man”