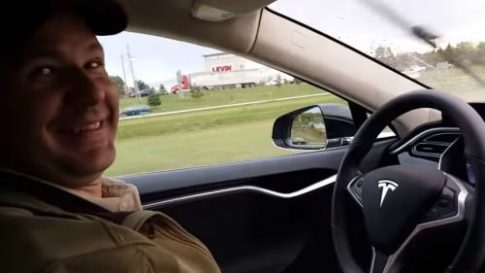 In an image from an online video posted by Brown driving his Tesla Model S.

Call it a case of tragic irony.

Earlier today, Tesla reported (with a one day delay so that perhaps its stock wouldn’t get clobbered ahead of quarter end rebalancing) that a 40-year-old Ohio man, named Joshua Brown, was killed when his 2015 Model S drove under the trailer of an 18-wheeler on a highway near Williston, Florida, sending Tesla stock lower nearly 3%.

In its defense, Tesla said in a blog post that the autopilot didn’t notice the white side of the tractor trailer against a brightly lit sky, so the brake wasn’t applied; the company reported the May 7 incident to National Highway Traffic Safety Administration. Surprisingly, it took the company nearly two months to notify its shareholders of what was a material event to the business model of a company whose “autopilot” feature has been pinned as one of the core growth drivers, pardon the pun; furthermore, a virtually assured outcome of this tragic accident is a costly recall (not to mention litigation) one which will soak up even more of the company’s already massive cash burn.

And while the details of the accident are sure to add fuel to the debate over whether self-driving cars are ready for the real world (they are not, especially when the “auto pilot” is merely a gimmick meant to boost the price of an overhyped stock, while masking the inherent flaws of a substandard luxury car by piling on even more hype), the real irony is that Brown, who was killed while using his Tesla Model S’s autopilot feature, had previously praised precisely the same feature and had posted video of Tesla autonomous driving ability helping to save him from a collision.

Joshua Brown died May 7 in a motor vehicle accident, according to an online obituary. The same picture used with that obituary was used on the YouTube account that posted the near miss in April, and as MarketWatch reports a Florida coroner confirmed Thursday that the driver killed in the crash there was named Joshua Brown.

According to the Google account linked to his YouTube, Brown was the owner and founder of Nexu Innovations, a research and development company based in Stow, Ohio, that dabbled in networking, product development and 3-D printing. His corporate bio states that he served in the U.S. Navy for more than 11 years after studying at the University of New Mexico.

Tesla described Brown, without naming him, in its blog post as “a friend to Tesla and the broader EV community, a person who spent his life focused on innovation and the promise of technology and who believed strongly in Tesla’s mission.”

In the description of the video, uploaded to YouTube on April 10, he praised the car and its autopilot features.

Tesla Model S autopilot saved the car autonomously from a side collision from a boom lift truck. I was driving down the interstate and you can see the boom lift truck in question on the left side of the screen on a joining interstate road. Once the roads merged, the truck tried to get to the exit ramp on the right and never saw my Tesla. I actually wasn’t watching that direction and Tessy (the name of my car) was on duty with autopilot engaged. I became aware of the danger when Tessy alerted me with the “immediately take over” warning chime and the car swerving to the right to avoid the side collision.

You can see where I took over when there’s a little bit of blip in the steering. Tessy had already moved to the right to avoid the collision. I was not able to slow down even more due to the heavy traffic (cars were behind me). Once I got behind him I slowly added more room between us until he exited. I was not tail gating after the incident.

It was a mistake on the other driver’s part. He did not even know I was there until I honked my horn. There was a group of women in the black sedan to my left and they went nuts about the guy and what he did (all kinds of gesturing in their car). Once I was beside the truck as it slowed down on the ramp, the guy gestured a “sorry!” I gave him, “it’s okay” wave.

Tessy did great. I have done a lot of testing with the sensors in the car and the software capabilities. I have always been impressed with the car, but I had not tested the car’s side collision avoidance. I am VERY impressed. Excellent job Elon!

Note: I have over 39,000 miles on the car and I’ve had it since mid-July 2015. Hands down the best car I have ever owned and use it to its full extent. It has done many, many amazing things, but this was one of the more interesting things caught on the dashcam.

Less than a month later he would be dead, having relied on the same “self-driving” feature. Perhaps it is time for the NHTSA to actually start doing its job instead of fawning over the shaky and increasingly more questionable credentials of a still very wealthy “real world Iron Man“, who in the aftermath of his shocking announcement to buy SolarCity, has in recent weeks been called a charlatan by an increasingly more vocal group of outside observers.