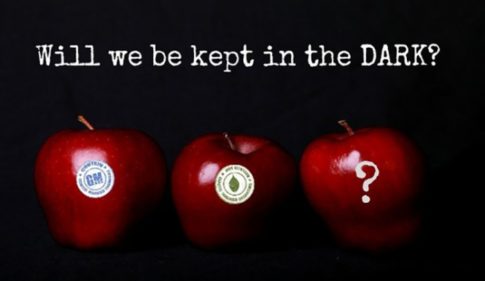 On Tuesday June 23rd, it was reported that the Senate’s Agriculture Committee had reached a deal on GMO food labeling and what is essentially a slightly modified version of what clean food proponents have labeled the DARK Act (Denying Americans the Right to Know Act).

Senators, corporations and the Grocery Manufacturer’s Association are hailing the bill as the victory for the art of compromise. While labeling proponents and otherwise thinking Americans realize that the bill is nothing more than an attempt to prevent them from actually knowing what they’re eating as well as an attempt to prevent states from making that information available to them.

Vermont’s own GMO labeling law comes into effect on July 1st but the Senate’s new bill would preempt that law and other state laws that would require food producers to simply inform consumers of the presence of genetically modified organisms (GMOs).

Many national food companies have already begun adding simple, on-package GMO labels, many of them doing so in order to comply with the Vermont law proving that labeling can be achieved without economic collapse, mass starvation and the implosion of the universe.

The new bill, however, will reaffirm the alleged and disproven “scientific consensus” that GMOs are safe and allow food companies to avoid any mention of the process of genetic engineering on food packaging. GMO ingredients may be disclosed through digital codes and smart phone apps as well as phone numbers as opposed to on-package language. It would nullify the Vermont law and other laws similar to it and provide exemptions for food manufacturers that are considered very small, a designation exploited by major agricultural companies on a daily basis.

The law also allows for the USDA to determine the amount of GMOs that might be present in food before it is considered a bioengineered food. Foods that have egg products, poultry and meat as main ingredients will be exempted. There are no federal penalties provided for violation of the labeling requirements.

Some opponents of the bill point out that a provision which sets a definition of genetic engineering and bioengineering would be such a narrow definition that it could mean that foods which contain GMO soybeans or corn would not even be subject to the weak, tepid and virtually non-existent labeling requirements as proposed in the bill.

Consumer groups are vowing to blitz members of Congress with demands that they block the law, reminding them that this isn’t about politics – it’s about a consumer’s fundamental right to make an informed decision about the food they are buying for themselves and their families.

Many consumers worry that the genetically engineered crops on the market now carry potential and actual risks for human health and the environment. They worry that because most GMO crops are sprayed with glyphosate herbicide, which the World Health Organization has declared a probable human carcinogen, that GMO foods might contain dangerous levels of that pesticide. And they lack confidence in the regulatory and corporate entities that say those concerns are unsubstantiated even though the regulators require no independent safety testing of genetically engineered crops before they are commercialized for food.

The food and agrichemical and seed industry interests have brushed aside those concerns, and have acknowledged that they fear consumers will turn away from foods clearly labeled GMO in favor of non-GMO, natural or organic products.

The new agreement made by the Senate Agriculture Committee is not a compromise, nor is it a sell-out. In order for an individual to sell out, it has to first be aligned with something else. In 2016, none but the most naive Americans believe that their Senators and Congressmen have their best interest at heart. Instead, it is a coup accomplished by major corporations for the purpose of preventing consumer choice and any attempt to resist their monopoly and control of the country’s food supply. We encourage every American to get active in order to stop this bill and to simultaneously begin an offensive strategy to not only label GMOs but to ban them.