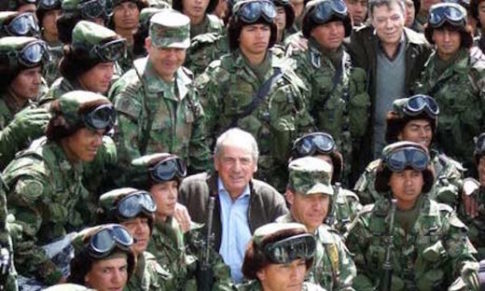 – Behind the Headlines: Britain’s Secret Wars: Interview with T.J. Coles:

The British government is not a force for peace or democracy. The reality is much darker: British foreign policy supports war, conflict and oppression around the world. Unbeknownst to the broad population, the Shadow State sponsors a ‘new world order’ that allies Britain with America’s quest for global power – what the Pentagon calls ‘Full Spectrum Dominance’. In his brand new book, Britain’s Secret Wars, T. J. Coles documents how British operatives have interfered in Syria, Libya, Iraq, Iran and Yemen with the aim of deposing unwanted regimes. In doing so, they have helped create extensive terrorist networks across the Middle East, reviving previously-failing Jihadist groups such as ISIL, which has now transformed into an international terror franchise.

In addition to waging clandestine wars in the Middle East, the secret services have used the military to run drugs by proxy in Colombia, train death squads in Bangladesh, and support instability in Ukraine, where NATO’s strategic encroachment on Russia is drawing the world closer to terminal nuclear confrontation. Coles unearths Britain’s involvement in the recent ethnic cleansing of Tamil civilians by the Sri Lankan government, the invasion of Somalia by Somali and Ethiopian warlords, and Indonesia’s atrocities in Papua. He also exposes the extensive use of drones for murder and intimidation across the Middle East and elsewhere.

T. J. Coles studies the philosophy of neurology and cognition at the University of Plymouth, UK. He is director of the Plymouth Institute for Peace Research (PIPR), editor and co-author of Voices for Peace and author of The New Atheism Hoax. His political writings have appeared in the New Statesman, Lobster, Peace Review and Z Magazine. He is also a columnist with Axis of Logic and in 2013 was shortlisted for the Martha Gellhorn Prize for journalism.

Tune in this Sunday for Behind the Headlines’ interview with Coles about his new book and the truth about British foreign policy.