“The tide of change has just turned inexorably.
We have started a journey of unknown adventure and undoubted discomfort and unrest.” 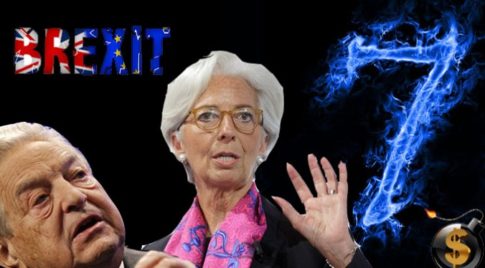 In 2014, Christine Lagarde gave a speech on “the magic number 7.”  It, along with work by Jonathan Cahn, led us to the Shemitah seven-year cycle and the Jubilee year, which the globalist elites are well aware of.

What we’ve discovered since is that there is even more to the “magic number 7” than just years… it appears to correlate right down to months, weeks and days.

The last major market crash occurred on September 29, 2008.  On that day, the Dow Jones fell 777 points, of all numbers…. its biggest one day point drop ever.

On Friday, in the aftermath of Brexit, the Dow fell over 600 points.  What’s interesting about Friday’s date?

And what a day Friday, June 24th was!

The Japan Nikkei fell more than 7% and was closed, the London FTSE exchange lost £100 billion in value and fell as much as 8.7% and the Dow fell 600 points.

This is exactly the type of Super Shemitah/Jubilee volatility we’ve warned about: clinical, catastrophic, methodical.

While we were unsure if Brexit would succeed or not, we told subscribers to stick with their positions that were long in gold, gold stocks, bitcoin and short the US stock market.

It turned out to be another fantastic call, as gold soared nearly $100 on Friday, as did bitcoin. Our gold stock positions also skyrocketed.

BREXIT PART OF THE JUBILEE PLAN?

Having had a day to think about all that has transpired, it appears to us that Brexit could actually be part of the Jubilee year plan for maximum chaos.

We were surprised to see Brexit win… after all, any past vote of this type has been stymied either through propaganda, vote rigging or other manipulations.

But, in retrospect, this makes perfect sense.

We’ll be talking about this more deeply in our upcoming newsletter going out to subscribers just after this weekend… but here are a few things to chew on.

First, David Cameron was elected upon his promise to hold a Brexit vote in 2017.  He changed that, shocking many, to June 23rd of this year… just a day before the 7th year, 7th month, 7th week and 7th day after the last major financial crisis.  Why would he do such a thing?  Take such a risk?  He could have waited another 1-2 years to take that risk.

Lost in the headlines was that on Friday, Bank of England Governor, Mark Carney, committed to printing up 250 billion pounds ($345.93 billion USD) to “support financial markets.”

No one has mentioned that or even seems to know about it.  So, within hours, the banks in the UK appear to have received a massive 2008 style bailout… but without anyone noticing.

And, who profited?  People like George Soros, who moved into gold as his biggest position and shorted the markets just in the last few weeks.

Given this, I think it is safe to say that this was planned.

Again, I’ll go into this far deeper to our subscribers early next week, but it appears the demolition of the EU is part of the plan to create massive chaos in order to bring in a New Order.

Also, note that David Cameron has resigned but won’t actually step down until October, which is just after the end of the Jubilee Year.  Also note that the Brexit vote isn’t actually legally binding and has to be ratified by Parliament, which will not happen until at least October.

Within hours of the Brexit vote, as I said would happen, massive movements to leave the EU have erupted in France, Sweden, Denmark, Holland and Italy.  And, just prior to Brexit, Switzerland withdrew its long standing application to join the EU.

This, if allowed to happen, will entail crisis after crisis… just as we said to expect by October of this year.

On the bright side, people are waking up.  Brexit showed this.  Many are realizing that being ruled by technocrats whose names you don’t even know in far off places is miserable.

The elites are aware of this awakening and they don’t quite know how to stop it.  As John Kerry said, “this little thing called the internet is making it hard to govern.”  Govern is a synonym for control.

And so, we hope, more and more people will wake up and not only want to “Brexit” but also want to get rid of the UK government as well, and the US federal government, and eventually all governments… and the central banks.

This is what is happening.

The elites know this so they have decided not to fight that rising tide. They’re going to allow it to happen but create so much chaos in the process that almost everyone will be impoverished and will beg for a new, global ruler.

This is what is going on and there is no way to know how it will turn out.

In the meantime, our investments in precious metals and bitcoin will continue to prosper, and our other advice will help to keep you safe.

We are now getting into very interesting times!  We’ve profited massively already and it is just beginning.

Subscribe to the TDV newsletter (subscribe here) to get the best insights, analysis and recommendations for how to not only survive but prosper through The End Of The Monetary System As We Know It (TEOTMSAWKI).

We warned to be prepared for massive chaos this year and Brexit appears to be the linch pin that sets off the fireworks.  Hold on to your hats as we enter into the final quarter of this Jubilee Year!