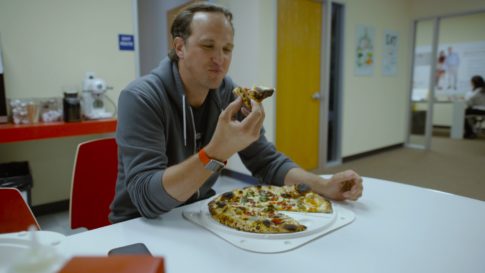 In the back kitchen of Mountain View’s newest pizzeria, Marta works tirelessly, spreading marinara sauce on uncooked pies. She doesn’t complain, takes no breaks, and has never needed a sick day. She works for free.

Marta is one of two robots working at Zume Pizza, a secretive food delivery startup trying to make a more profitable pizza through machines. It’s also created special delivery trucks that will finish cooking pizzas during the journey to hungry customers if approved by the Santa Clara County Department of Environmental Health. Right now Zume is only feeding people in Mountain View, California, but it has ambitions to dominate the $9.7 billion pizza delivery industry.

“We are going to be the Amazon of food,” said Zume’s co-founder and executive chairman, Alex Garden. Garden, 41, is the former president of Zynga Studios. Before that, he was a general manager of Microsoft’s Xbox Live. Garden launched Zume in stealth mode last June, when he began quietly recruiting engineers under a pseudonym and building his patented trucks in an unmarked Mountain View garage. In September, he brought on Julia Collins, a 37-year-old restaurant veteran. She became chief executive officer and a co-founder. Collins was previously the vice president and CEO of Harlem Jazz Enterprises, the holding company for Minton’s, a historic Harlem eatery.

In October, Zume began working closely with Swiss robot maker, ABB, and a global crew of mechanical, electrical and software engineers. In April, the startup sold its first cyborg-constructed pie to an unsuspecting customer in Mountain View.