Bank layoffs are now coming at a rapid pace in what is a clear sign of desperation by the firms to cut costs enough to keep shareholders happy as NIRP continues to hammer bank profits.

On the heels of Bank of America announcing that 8,000 employees would be fired last week, we now learn that RBS will be cutting 900 jobs as well, in areas such as IT and other back office positions that support the commercial, retail and private bank will be cut in Britain. The latest round of cuts takes the total number of layoffs in the last four months to roughly 5% of the bank’s british workforce, as at least 2,700 staff across the country have been let go since the beginning of March according to Reuters.

As we noted earlier this year, RBS reported its eighth consecutive annual loss in 2015, and the bank which is 73% state owned after a $64 billion bailout, is trying desperately to restructure itself in order to return to profitability. 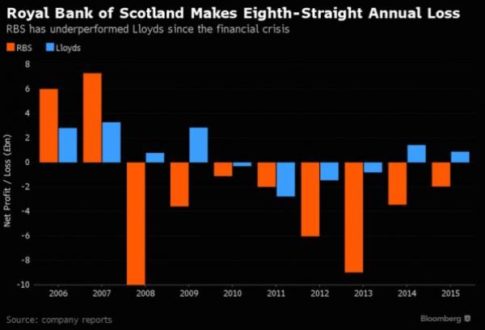 Sources tell Reuters that more layoffs are expected to be announced in the coming months as well.

“We understand how difficult this is for our staff and will be offering as much support as we can including redeploying to other roles where possible” the bank said in a statement.

In summary, even after the massive amount of bank layoffs that have taken place we can expect even more in the future as growth strategies have clearly turned to cost cutting strategies in order to conserve any type of profit in this healthy global economy.