– You are currently living through the dumbest monetary experimental end game in history (including Havenstein and Gono’s):

We have seen several explanations for the financial crisis and its lingering effects depressing our global economy in its aftermath. Some are plain stupid, such as greed for some reason suddenly overwhelmed people working within finance, as if people in finance were not greedy before 2007. Others try to explain it through “liberalisation” which is almost just as nonsensical as government regulators never liberalised anything, but rather allowed fraud, in polite company called fractional reserve banking, to grow unrestrained. Some point to excess savings in exporting countries as the culprit behind our misery. Excess saving forces less frugal countries reluctantly to run deficits, or so the argument goes.

While some theories are pure folly, others are partial right, but none seem to grasp the fundamental factor that pulled and keep pulling the world into such unsustainable constellations witnessed in global finance, trade and capital allocation.

Whenever we try to explain the reasons behind the crisis, such as the build-up in non-productive and counterproductive debt (see here, here and here for more details) people ask us why did this happened now, and not earlier? It is a fair question that we have thought about and believe have one simple answer. Bottom line, the world economy is running on a system with no natural correcting mechanisms.

As we are never tired of pointing out, the Soviet Union only had one recession, the one in 1989. The system was stable, until it was not. A system that does not correct internal imbalances grows just like a parasitic cancer, eventually killing its host. If unsustainable capital allocations are allowed to continue unchecked, the pool of real savings will at some point be depleted. At that point recession hits because the structure of production is too capital intensive relative to the level of real saving available. A quick look at US saving and investment rates since the 1950s confirms what we all know to be true; saving and investments are not keeping up with GDP growth. That the trend broke after Nixon took the dollar of gold in 1971 is not a coincidence. Real funding for economic activity were slowly substituted from proper saving towards “forced” saving through fiat money expansion. 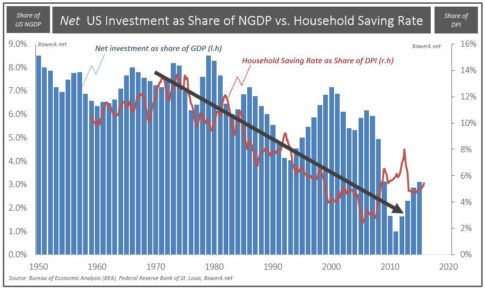 The inevitable result from such a policy has been the massive increase in debt and drop in the US balance versus the rest of the world. No matter what political leaning the country had, debt kept on rising and its mirror image, the current account balance, kept on falling. The US mortgaged their future to foreigners willing to fund this consumption spree. No one seemed to care that the US did not build up a productive capital base that could service all this debt in the future. The US, issuer of the world reserve currency, was good as gold. At least that was what the world assumed, and surprisingly enough still do. 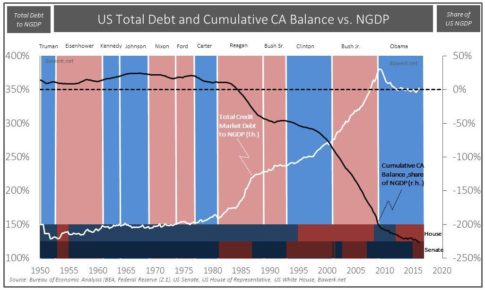 So what does this have to do with a world in economic crisis? A dollar standard, with 100 per cent flexibility, led the US to emit dollar into the global economy at an increasing pace. Past follies occasionally caught up with the monetary masters in the Eccles building, which had the power to literally paper over them with bouts of new dollar emissions. The global economy was, and is, essentially running on a dollar standard and the Federal Reserve of the United States increasingly became the central bank of the world. A setback in global trade would affect all parties involved, and the transmitter were the US dollar. A contraction in dollar claims as created by the world’s banking system had the ability to derail the whole global system. The ebb and flow of US dollar denominated credit gradually morphed into the global economy. The Federal Reserve had to secure dollar liquidity to the global banking system, no matter where the bank were domiciled.

But therein lies the rub; by constantly bailing out unproductive business ventures the global system kept on toward the economic cliff. Financial imbalances, as shown clearly in the chart below, never corrected itself. Surplus countries kept on with surpluses while deficit countries maintained their deficits. Year after year.

A free market system would correct these imbalances long before they became a danger to the system. A fully flexible dollar standard, concocted on Keynesian principles, whereby demand does actually create its own supply (dollar reserve demand will always be met with additional supply, worldwide, as anything else leads to crisis) on the other hand will not perform this most fundamental task. 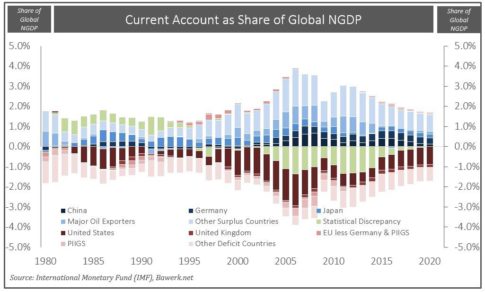 With the Federal Reserve suppressing any natural correction mechanism, the global economic system has been moulded into a perversion. A perversion that simply cannot be allowed its natural course because its legacy of capital misallocation would be too much to bear.

Of course, if it is not sustainable it will not continue ad infinitum. Our money masters are just postponing the inevitable bust that will eventually correct these imbalances through worldwide capital re-allocation. This earthquake of an economic downturn has been building tensions for so long that the consequences will be mass unemployment and financial losses like never seen before. Political upheaval and social unrest undoubtedly follows.

Federal Reserve parlour tricks that used to work when saving rates where high(er) and financial wealth more uniformly distributed will, to the amazement of today’s pundits, stop working. Moving capital and wealth from the poor to the rich, through inflationary depressing wages and boosting asset values, is a tax policy with rapid diminishing marginal returns, as witnessed by ever-larger amount of debt it takes to create GDP growth.

We are actually living through the end-game of the greatest Keynesian monetary experiment as we type. It was one hell of a party while it lasted, but the hangover is now over us.