– The Minimum Wage Pain Continues: Hundreds More To Be Fired At Walmart:

Walmart reported relatively decent Q1 results, however one item that was apparent is that costs are still a factor in the business, as operating income was lower y/y even on increased revenues.

We’ve discussed many times the fact that Walmart has been overly eager to boost everyone’s wage in order to appease the living wage crowd, and as a result the company has had to move forward with massive layoffs and store closings to try and mitigate the impact on profits. Earlier this month we also noted that Walmart is testing out drones that when operational, will be able to carry out what once were human tasks in its large distribution centers. This effort will further position the company to be able to shed more labor and benefit expense in the future. That said, Walmart isn’t waiting for the drone initiative to come online.

The company recently announced that the accounting function at roughly 500 stores, mostly on the West Coast, will be eliminated and the job responsibilities will be handled by a shared service center at Walmart’s Bentonville, Arkansas headquarters the WSJ reports. The function was used to count cash, as well as handle invoicing for companies that bring product directly to the store instead of the warehouse. Invoicing will move to Bentonville, and machines will now be used to count the cash at each location. Mark Ibbotson, executive VP for central operations at Walmart US said the current system is dated and error-prone, “we really want to pull our workforce onto the floor” – yes, or reduce headcount and labor costs, one of the two.

Walmart says the affected workers have been offered othere consumer facing store positions, though they aren’t guaranteed the same hourly wage. Although workers would take a step down in pay, making $17.55 an hour, Walmart only expects 1% of the employees affected to leave the company. Said otherwise, either way, costs have been reduced, and those employees will just be swept up in the next round of layoffs down the road.

For now, the store employee changes are “pilot”, and “if we are happy, if everything follows, we will consider the next phase” Ibbotson said.

The next phase Ibbotson mentions is obviously more efficiency gains and subsequent layoffs – however if there needs to be a silver lining, at least the Walmart Greeter has returned… 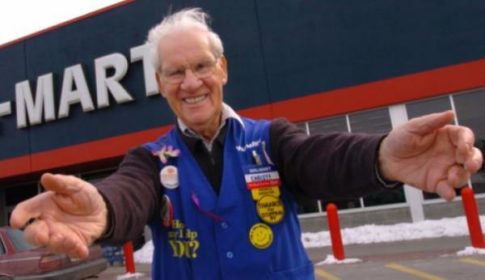