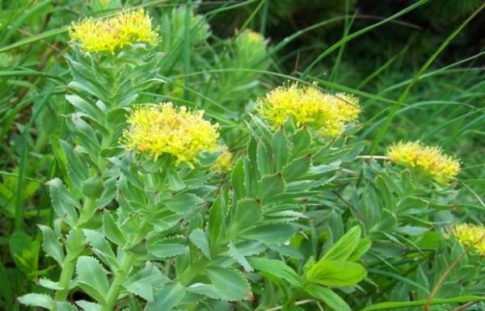 Several years ago I’ve grown many rhodiola plants from seeds. I was so happy when all these little ‘creatures’ showed up. In spring you can easily multiply them by making some cuttings. Rhodiola is another adaptogen. It strengthens the nervous system, fights depression, enhances immunity, elevates the capacity for exercise, enhances memory, aids weight reduction, increases sexual function and improves energy levels. The Eskimos and the Laplanders are also eating the leaves. I’m juicing the leaves. For more information on rhodiola see the article down below. 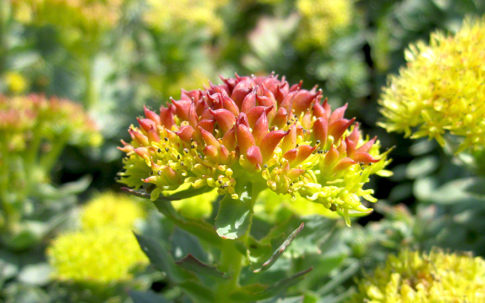 Rhodiola rosea is a remarkable herb that has a wide and varied history of uses. It is thought to strengthen the nervous system, fight depression, enhance immunity, elevate the capacity for exercise, enhance memory, aid weight reduction, increase sexual function and improve energy levels. It has long been known as a potent adaptogen. Adaptogens are substances that increase the body’s overall resistance and help to normalise bodily functions.

Rhodiola has a legendary history dating back thousands of years. In 77 A.D., the Greek physician Dioscorides documented the medical applications of the plant, which he then called rodia riza, in his classic medical text De Materia Medica. The Vikings depended on the herb to enhance their physical strength and endurance, while Chinese emperors sent expeditions to Siberia to bring back “the golden root” for medicinal preparations. The people of central Asia considered a tea brewed from Rhodiola rosea to be the most effective treatment for cold and flu. Mongolian physicians prescribed it for tuberculosis and cancer.

Research on Rhodiola rosea and other medicinal herbs was part of the Soviet Union’s great push to compete with the West in military development, the arms race, space exploration, Olympic sports, science, medicine, and industry. It is a popular plant in traditional medical systems in Eastern Europe and Asia, with a reputation for stimulating the nervous system, decreasing depression, enhancing work performance, eliminating fatigue, and preventing high altitude sickness.

In animal studies, extracts of rhodiola, seem to enhance the transport of serotonin precursors, tryptophan, and 5-hydroxytryptophan into the brain. Serotonin is a widely studied brain neurotransmitter chemical that is involved in many functions including, smooth muscle contraction, temperature regulation, appetite, pain perception, behavior, blood pressure and respiration. When balanced, it imparts a sense of contentment and mental ease. Either too much or too little serotonin on the other hand has been linked to various abnormal mental states such as clinical depression. Thus rhodiola has been used by Russian scientists alone or in combination with antidepressants to boost one’s mental state, a boon in countries and seasons where one is deprived of adequate sun over prolonged periods of months. This leads to a condition known as SAD or Seasonal Affective Disorder, common to Northern European countries.

New Research: New study on Rhodiola may bring hope for sufferers of depression

Rhodiola rosea has long been known as a potent adaptogen. Adaptogens are natural plant substances that increase the body’s non-specific resistance and normalise the functions of the body. When a stressful situation occurs, consuming adaptogens generates a degree of generalised adaptation (or non-specific resistance) that allows our physiology to handle the stressful situation in a more resourceful manner. It is believed that adaptogens work by increasing the ability of cells to manufacture and use cell fuel more efficiently.

Since Rhodiola rosea administration appears to impact central monoamine levels, it might also provide benefits and be the adaptogen of choice in clinical conditions characterised by an imbalance of central nervous system monoamines. This is consistent with Russian claims for improvements in depression and schizophrenia. It also suggests that research in areas such as seasonal affective disorder, fibromyalgia, and chronic fatigue syndrome, among others, is warranted.

There have also been claims that this plant has great utility as a therapy in asthenic conditions (decline in work performance, sleep disturbances, poor appetite, irritability, hypertension, headaches, and fatigue) developing subsequent to intense physical or intellectual strain, influenza and other viral exposures, and other illness. Two randomised, double-blind, placebo-controlled trials of the standardised extract of Rhodiola rosea root (SHR-5) provide a degree of support for these claimed adaptogenic properties.

Studies using proofreading tests have demonstrated that Rhodiola rosea enhances memorisation and concentration ability over prolonged periods. It increases the bioelectrical activity of the brain which improves memory and brain energy.

Rhodiola has also been shown to be effective for cardiac problems caused or aggravated by stress. Its action for these conditions is in its ability to decrease the amount of catecholamines and corticosteroids released by the adrenal glands during stress. The abnormal presence of these stress hormones will subsequently raise blood pressure, cholesterol, potassium levels and increase risk factors for heart disease. Rhodiola has been found to decrease harmful blood lipids and thus decrease the risk of heart disease. It also decreases the amount of cyclic-AMP (c-AMP) released into cardiac cells. Cyclic AMP is related to ATP (adenosine triphosphate), the body’s primary energy molecule. C-AMP acts as a ‘second messenger’ or liaison between the outer and inner environments of the cell. It assists in the uptake of more intracellular calcium into the heart thus promoting a greater potential for heart muscle contraction. Rhodiola thus regulates the heartbeat and counteracts heart arrhythmias.

Rhodiola has been shown to increase antitumor activity by increasing the body’s resistance to toxins. A range of antioxidant compounds have been identified in Rhodiola rosea and related species and significant free-radical scavenging activity has been demonstrated for alcohol and water extracts of Rhodiola. Rhodiola rosea might be useful in conjunction with some pharmaceutical anti-tumour agents. According to the information from Russian researchers have found that the oral administration of Rhodiola inhibited tumour growths in rats by 39% and decreased metastasis by 50%. It improved urinary tissue and immunity in patients with bladder cancer. In other experiments with various types of cancer, including adenocarcinomas, the use of extracts of Rhodiola Rosea resulted in significant increased survival rate.

Rhodiola both stimulates and protects the immune system by reinstating homeostasis (metabolic balance) in the body. It also increases the natural killer cells (NK) in the stomach and spleen. This action may be due to its ability to normalise hormones by modulating the release of glucocorticoid into the body.

Many other benefits from the use of Rhodiola has been found including its ability to improve hearing, to regulate blood sugar levels for diabetics and protect the liver from environmental toxins. It has been shown to activate the lipolytic processes (fat breakdown) and mobilise lipids from adipose tissue to the natural fat burning system of your body for weight reduction. It can also clinically enhance thyroid function without causing hyperthyroidism, enhance thymus gland function and protect or delay involution that occurs with ageing. It can also improve your adrenal gland reserves without causing hypertrophy. Throughout the years it has shown to substantially improve erectile dysfunction and/or premature ejaculation in men and normalises their prostatic fluid.