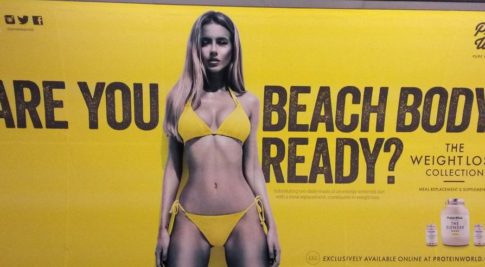 If you’re the type of person that sees a model in an advertisement and immediately gets depressed that you’ve skipped the last 6 months in the gym since signing up for that New Year’s day membership special – or if you just can’t stand to see a sexy woman in a bikini for that matter – newly elected mayor of London Sadiq Khan has a remedy.

Khan has announced that Transport for London (greater London transportation system) will no longer run ads which could cause “body confidence issues”, particularly among young people the Evening Standard reports. That means London can say goodbye to seeing sexy women in bikinis that are featured in advertisements such as Protein World’s “Are You Beach Body Ready.”

“As a father of two teenage girls, I am extremely concerned about this kind of advertising which can demean people, particularly women, and make them ashamed of their bodies. It is high time it came to an end. Nobody should feel pressurised, while they travel on the Tube or bus, into unrealistic expectations surrounding their bodies and I want to send a clear message to the advertising industry about this.” Khan said.

Khan asked TfL and advertising partners Exterion Media and JCDecaux to set up a steering group in order to review all new ads submitted to TfL.

“Advertising on our network is unlike TV, online and print media. Our customers cannot simply switch off or turn a page if an advertisement offends or upsets them and we have a duty to ensure the copy we carry reflects that unique environment.” said Graeme Craig, TfL Commercial Development Director.

As far as a loss in advertising revenue, Khan claimed that there would be no impact. The TfL is still expected to generate more than £1.5 billion from advertising over the next eight years. Last year it made £170 million, up from £152 million in 2014.

No one’s confidence or body image should be undermined by ads on our transport system. I’ve strengthened @TfL policy https://t.co/AJ7qYDQW0T

City hall insists that the change comes as a result of passenger feedback rather than the fact that it is just nannying Londoners – except that is precisely what is happening. We’re not sure who gets offended by beautiful women, but sadly we keep finding ourselves referencing our 7 Harsh Realities piece more and more, which concludes as follows, and it can’t be repeated enough:

No matter where you go in life, someone will be there to offend you. Maybe it’s a joke you overheard on vacation, a spat at the office, or a difference of opinion with someone in line at the grocery store. Inevitably, someone will offend you and your values. If you cannot handle that without losing control of your emotions and reverting back to your “safe space” away from the harmful words of others, then you’re best to just stay put at home. Remember, though: if people in the outside world scare you, people on the internet will downright terrify you. It’s probably best to just accept these harsh realities of life and go out into the world prepared to confront them wherever they may be waiting.