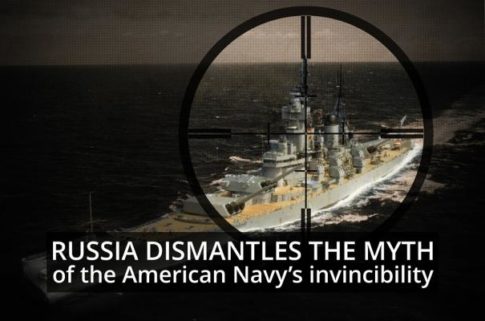 – Russia dismantles the myth of the American Navy’s invincibility:

US rules the globe, having a navy three times stronger than that of Russia. Moreover, the Pentagon has created a strategic command to deploy large units of land forces, consisting of hundreds of cargo ships of large capacity. All of these vessels are organized in very strong expeditionary naval groups and around aircraft carriers, amphibious landing ships, and naval convoys of troops and military equipment.

With troops deployed in Europe and Asia, with the armies of allied states, the US can trigger an invasion of Russia. Therefore Russia’s new military doctrine establishes that the biggest risk to Russia’s security groups is the American expeditionary naval groups, which can transport invasion troops to the Russian border.

Several types of anti-ballistic shield protect US naval expeditionary groups and zones of landing for troops from transport ships. The first is the naval system AEGIS armed with SM-3 block 1b mounted on US destroyers and cruisers AEGIS, plus anti-ballistic shields in Poland and one in Romania. The second is the mobile THAAD system of the US land forces, defending landing zones. Add to this the mobile long-range missile anti-aircraft batteries like Patriot with anti-ballistic capabilities against missiles that are in their final stage of the path, under an altitude of 35,000 m.

The premise from which Russian experts started building hypersonic vehicles was that American antiballistic missiles cannot intercept any projectile flying in the mesosphere (at altitudes of 35.000- 80.000 m), and that Russia, unlike the US, owns a number of very powerful rocket engines. For example, the Pentagon and NASA cannot send satellites into orbit if Russia does not deliver the RD-180 rocket engines. Russia is on the verge of creating, starting in 2018, the surest antidote to this vulnerability by means of a hypersonic battle. Aerial vehicles are classified according to the airspeed as follows: subsonic (below the speed of 1,220 km/h, – Mach 1) supersonic (speeds between Mach 1 and Mach 5 – up to 6000 km/h), and hypersonic (with speeds between Mach 5 and Mach 10 – up to 12,000 km/h).

The main Russian hypersonic weapon are derived from space glider Yu-71 (Project 4202), which flew during tests at a speed of 6000-11200 km/h over a distance of 5,500 km at a cruising altitude below 80,000 m, receiving repeated pulses from a rocket engine to climb, execute maneuvers and cornering trajectory. It is estimated that the glider is armed with warheads that are spatially independent, with autonomous guidance systems similar to the air-ground missiles Kh-29 L/T and T Kh-25 (which provides a probable deviation of 2-6 m). Although it may take nuclear warheads, the space glider will be armed with conventional warheads and will be powered by a rocket launched normally from nuclear-powered Russian submarines. 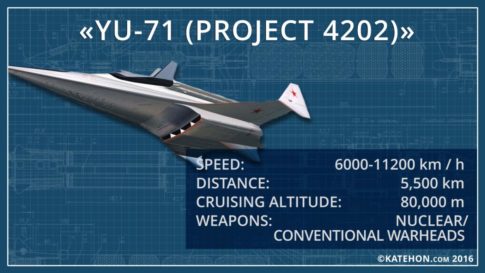 Another variant of the hypersonic weapon derived from the Yu-71 would be those launched from the Russian military transport aircraft Il-76MD-90A (II-476). Since 50% of the missile’s fuel is spent solely on take off and rising though the layers of extremely dense atmosphere of up to 10,000 m, mass launcher and glider space represents 50% of the rocket carrier used to launch from nuclear-powered submarines.

The second type of weapon different from hypersonic spatial glider is the Zirkon 3M22 missile, which is launched from maritime patrol aircraft. Zirkon has a speed of Mach 6.2 (6500 km/h) at a cruising altitude of 30,000 m and a kinetic energy at impact with the target 50 times higher than existing air-ship and ship-to ship missiles. 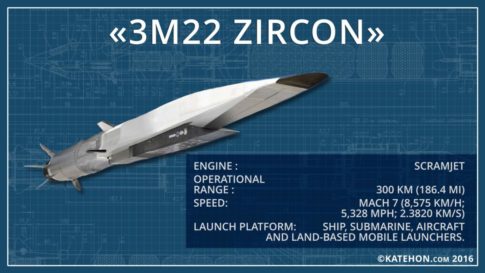 Hypersonic concept for a war

The new Russian military doctrine states that an attack on the American invasion fleet is to be executed in three waves, three alignments, thus preventing American expeditionary naval groups from positioning themselves near the Russian coast of the Baltic Sea. The first wave of hypersonic weapons, consisting of space gliders arranged on Russian nuclear-powered submarines under immersion in the middle of the Atlantic, starts fighting US naval expeditionary groups as they start crossing the Atlantic to Europe. The American naval groups need 7-8 days to cross the Atlantic; the plane Il-76MD-90A has a maximum flight distance of 6300 km and can be powered in the air, reaching the middle of the Atlantic Ocean in a few hours. 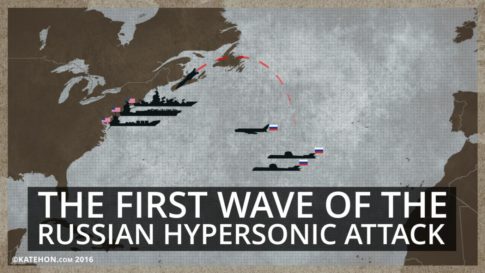 If the first wave does not destroy the targets, the second wave of hypersonic weapons will be launched on the US naval groups when they are located 1,000 km from the eastern shore of the Atlantic Ocean. The attack will be launched from the Russian submarines in the Barents Sea or Plesesk base of strategic missiles, located near the Arctic Circle and the White Sea. 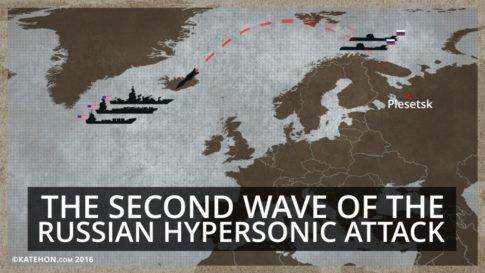 The third wave of hypersonic attack will be executed by missiles 3M22 Zirkon launched on American naval groups when they would be in the Skagerrak strait (crossing the North Sea to the Baltic Sea), on the assumption that NATO is attacking Russia through the Baltics. If the American expeditionary naval group head to the Black Sea, it will be hit by the third wave of hypersonic weapons in the Bosporus and Dardanelles straits. 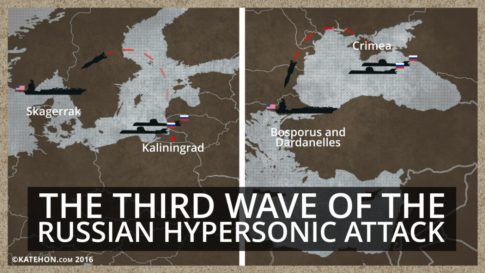 Thus, Poland, the Baltic States, and Romania – all NATO countries that use highly aggressive language and actions against Russia – should think better before triggering a military incident with Russia, since these countries rely only on military aid over the Atlantic Ocean, which might never come.