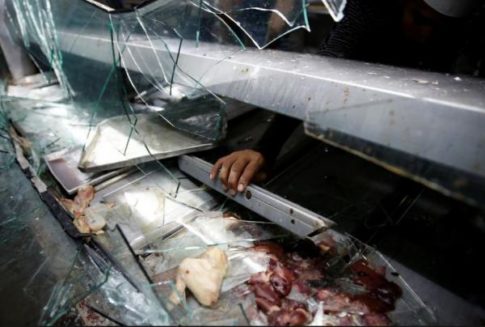 – Violent Riots And Looting Are Now A Daily Occurrence In Venezuela:

Last month we reported that citizens in Venezuela had finally become so desperate for food that angry mobs flooded the streets and looted all of the supermarkets that were rumored to still have anything left on their shelves.

Not long after, tired and hungry protesters took to the streets of Caracas once again, this time marching toward the presidential palace as they chanted “No more talk – we want food!.” The mob was able to get within about six blocks of the palace before police in riot gear blocked the way, and began to shoot tear gas into the crowd to disperse the protest.

And now, as president Maduro remains defiant on allowing a referendum to take place to vote on his ouster, food riots and violent looting are taking place every day in a stark reminder of just how far the socialist utopia has fallen. 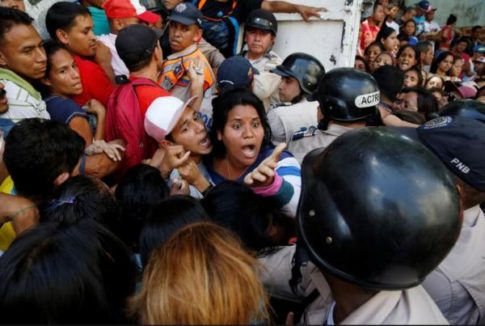 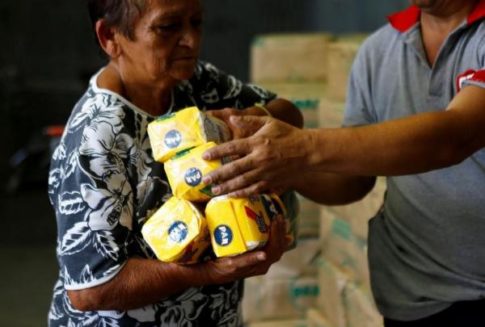 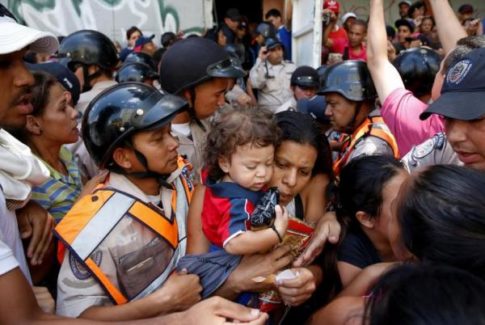 More than a quarter of the estimated 641 protests in Venezuela last month were over food, a figure that has risen every month this year, and the enormous social unrest in the country is something that should keep Maduro awake at night much more than the politics of it all. Despite hours in lines, Venezuelans increasingly find that coveted supplies of subsidized flour and rice run out before they can buy them. Many people are skipping meals, getting by on mangoes stripped from trees – or taking matters into their own hands and doing things such as rushing stopped food trucks and stealing whatever food is available as we showed last week.

“We’re not eating. People are desperate for a looting.” said Miza Colmenares, a mother of three who had spent the night in line at a supermarket and had not eaten since the previous day when she had eggs for breakfast.

Supermarkets have become flashpoints across Venezuela, one of the world’s most violent countries.

More than 10 lootings occur every day now, according to the Venezuelan Observatory of Violence, and are increasing in the usually more insulated capital.

More than a quarter of the 641 protests last month were for food, according to a tally by the Venezuelan Observatory of Social Conflict, a figure that has risen every month this year.

Venezuela’s angry streets are arguably a bigger threat for Maduro than the political opposition, which is pushing to remove him via a recall referendum this year. One recent food protest came within blocks of the Miraflores presidential palace.

It is a remarkable turnaround for a government which prided itself on social welfare programs such as Cuban-staffed medical posts and subsidized supermarkets. It won elections time-and-time again thanks to devoted support from Venezuela’s poor.

But with their beloved former president, Hugo Chavez, dead for three years and the economy deteriorating rapidly, many former “Chavistas” have turned on Maduro. “Behind all this is the president, the rat in his palace, eating riches while we fight to buy pasta,” said homemaker Maria Perez, 31, once a Chavez supporter, at the El Valle supermarket.

As the citizens slowly come to the realization that the socialist government that promised everyone they’d always be taken care of can’t possibly follow through on those empty promises, the citizens have gone to a survival of the fittest type attitude toward the situation.

“HOODED AND ARMED” For months now, groups have ransacked delivery trucks that crash or suffer flat tires. But in recent weeks, there has been an increase in frustrated shoppers storming supermarkets after food runs out as well as cases of communities or armed gangs organizing lootings, sometimes reportedly to re-sell the goods.

In the small roadside town of Tacuato in the remote Paraguana peninsula late last month, residents and delinquents frustrated after spending the night in line for no food decided to loot the next passing truck.

“If you have a son who says, ‘Mommy I want my bottle,’ and you don’t have milk to give him, in a moment like that you don’t think of anything else and you grab everything you can for your family,” said one woman, asking to remain anonymous to avoid compromising her job.

Also in late May, a group stormed a small store in the Andean state of Tachira after the owner declined to sell all the corn flour she had, preferring to keep some for the next day.

“They waited for nightfall, watched me get on the bus … and some 70 people came up, hooded and armed,” said the store owner, who asked to remain anonymous for fear of retaliation.

They stole a TV, cash, and eight bags of flour, said the owner, who has not dared re-open her store.

As we noted the violence isn’t just among the looters vying for scraps of food, police also attacked and robbed journalists covering recent protests in Caracas, and as Reuters further reports, a policeman is now being charged in Tachira after a woman was gunned down following a looting attempt earlier this month.

“We’re going to tire of this. There will be something like Caracazo for sure” said Yubisai Blanco, as she clutched her two bags of pasta after waiting seven hours in line.

Caracazo references a time when hundreds died during riots and looting sparked by yet another economic crisis in the country.

The swift deterioration of a nation should be a very clear wake up call for everyone, even in places, or perhaps especially in places such as America where the prevailing attitude toward this type of social unrest is “it won’t happen here.” All it takes is a slight disruption in the supply chain of many supermarkets and millions of Americans will be without food very quickly, it’s important to always keep that in mind. Being prepared is always in everyone’s best interest.