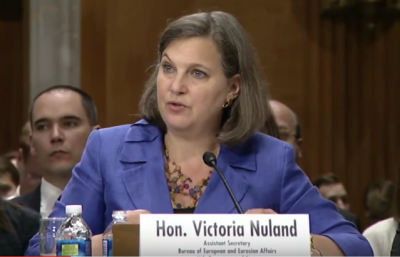 – Nuland to Congress: We Spend $100 Mil a Year Trying to Destabilize Russia (Video):

On Tuesday, the US Senate Committee on Foreign Relations scheduled a two-hour anti-Russian hate-fest. Lies, misinformation and jaw-dropping stupidity were on full display. The star witness of course, was Tricky Vicky Nuland.

These congressional committee meetings crack me up. In theory, they’re supposed to be interviewing witnesses to collect information. In reality it’s a platform for congressmen to make speeches satisfying the special interests who own them and then they read questions from prepared notes provided to them by “experts” or lobbyists (or maybe the witnesses themselves). Then they get the answers they want to hear from the witnesses. It is 100% theater.

Nuland’s opening statement was full of scare mongering about the supposed threat to peaceful civilization from Moscow. She did provide some telling facts. She said the US had already spent $600 million on “security assistance” to Ukraine – so on top of other billions in handouts from the IMF, most of which was stolen by oligarchs, that’s money going directly to killing kids in Donbass. (Warning, the foregoing link is very graphic. And there are many even worse images of Kiev’s terror victims I will not link to.)

Poroshenko was very clear how Kiev intends to win the war. They intend to win it by blockade and terror shelling of Donetsk. Just like Hitler planned to beat Leningrad. So they imagine.

As if the “Ukrainian army” (if that’s what they call neo-Nazi private legions) and the assistance provided to them would be enough to stop the Russian army from actually taking over Ukraine, were Moscow so inclined.

No, Vicky, that’s equipment going directly to kill kids in Donbass. How’s that for “Russian propaganda?” How am I doing?

Are my fellow Americans satisfied with how their tax money is being spent?

But the United States is not stopping at simply supporting war and economic destruction in Ukraine. They want to spread the same kind of “freedom” to Russia.

Here’s where Lil’ Marco Rubio comes in. He’s a tough guy. He’d probably nuke the world just to prove he’s a man. (Well, Hillary will probably do it to prove she’s a man as well.)

Lil’ Marco asked Tricky Vicky if the sanctions had changed Putin’s “aggressive behavior.” She said yes, they stopped him from continuing his “invasion” of Ukraine beyond Crimea and Donbass. Then Rubio says he knows they’d hoped Crimea would bankrupt Russia, any sign that’s happening? Vicky says not yet, but Crimea’s really hurting them. Tough Lil’ Marco said good we ought to double up the sanctions. Vicky says they will if they need to, plus even if they lift the Russia sanctions, sanctions on Crimea will never be lifted until Crimea returns to Ukraine.

Well Crimea is never returning to Ukraine. So in other words, Crimean sanctions will stay until hell freezes over.

So they were hoping fixing up Crimea would bankrupt Russia, but they expect us to believe Putin wanted all Ukraine? Yeah I’m sure he wanted that trillion dollar black hole.

Next comes in one Sen. Shaheen, who sounds like somebody’s clueless grandmother. She probably cannot find Russia on a map. She keeps glancing at her notes just to get through her opening statement. She has probably never even seen RT, though she condemns it on cue.

It was here that Vicky let us know the extent of US efforts to turn Russia into a smoldering wasteland wrecked by civil war and terror just like they did to Ukraine starting with Maidan. (But I’m sure all Vicky did was hand out pastries.)

Nuland claims the US is spending $100 million a year producing Russian-language propaganda in the Baltic states and Ukraine, as well as Russia. They also operate secret training programs for Russian journalists. She also said they provide funding to organizations and programs inside Russia but wouldn’t give details.

Actually, they have access to far more than that, with the total budget of the Broadcasting Board of Governors, which runs all official US propaganda directed abroad, being over $700 million. (US government agencies and departments routinely underestimate the amount they spend on programs, in an effort to win more funding.) Meanwhile, Nuland told a bald faced lie that the budget of Russia’s RT was $400 million. It is closer to $300 million. But it would be difficult to count all of Vicky’s and her companion witness’ lies in just this 2 hour time span.

Of all the times the term “Russian” or “Kremlin propaganda” is uttered by the Western apologists, they consistently fail to give any examples. I suppose what they really mean by “Kremlin propaganda” is facts given by people who dare to confront their own politically correct Owellian distortion machine. In the past decades, the United States and its allies have done plenty to propagandize against themselves, doing no good for any country and more often than not leaving conflict and destruction in every country they touch, both economic and physical.

Does Russia in the last 25 years have anything like a comparable record of international violence and expansionism? The plain facts speak for themselves, which does the job of “Kremlin propaganda” on its own without much effort.

Though the facts speak for themselves, nobody will hear or read them if they aren’t written about, talked about, broadcast and published. Russia Insider‘s latest crowdfunding campaign is still active. If you care about spreading the truth, please donate using the links below this article. I can personally assure you that I, and we at RI, do not receive even 1 ruble from the Kremlin — although I guess that would be pretty nice. But we don’t. We’re 100% independent and reader supported. Banner ads also cover very little of our expenses. If you want this kind of media to continue, show your support financially. Thank you. 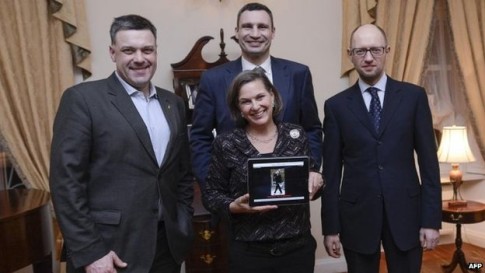 And this website has NO advertisements and really could use some help and support:

2 thoughts on “Victoria Nuland to Congress: We Spend $100 Mil a Year Trying to Destabilize Russia (Video)”