“Saudi Arabia always has sponsored both Republican and Democratic Party of America and in America current election also provide with full enthusiasm 20 percent of the cost of Hillary Clinton’s election even though some events in the country don’t have a positive look to support the king of a woman (sic) for presidency.” –  Saudi Deputy Crown Prince Mohammed bin Salman, in exclusive comments to Jordan’s Petra News Agency.

– Hillary Clinton: “If I’m President, We Will Attack Iran … We Would Be Able To Totally Obliterate Them.” 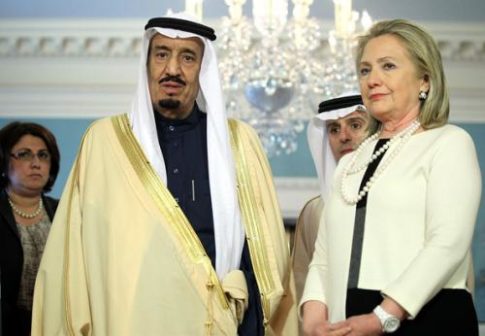 In what may be the pinnacle of hypocrisy, moments ago Hillary Clinton, while speaking live on national security and addressing the Orlando shooting took some time from her constant bashing of the Second Amendment and calling for a ban on assault rifles, to say some less than kind words about Saudi Arabia whom it accused of supporting radical organizations. This is what she said:

The third area that demands attention is preventing radicalization and countering efforts by ISIS and other international terrorist networks to recruit in the United States and Europe. For starters, it is long past time for the Saudis, the Qataris and the Kuwaitis and others to stop their citizens from funding extremist organizations. And they should stop supporting radical schools and mosques around the world that have set too many young people on a path towards extremism. We also have to use all our capabilities to counter jihadist propaganda online. This is something that I spend a lot of time on at the State Department.

There is nothing wrong with that statement, as it is the whole truth – Saudi Arabia’s involvement in supporting terrorism stretches from Sept 11 all the way through to ISIS – however, where there  is a big, and potentially law-breaking,  problem is what Jordan’s official news agency, Petra News Agency, reported on Sunday citing the Saudi crown price, namely that Saudi Arabia is a major funder of Hillary Clinton’s campaign to become the next president of the United States.

As MEE notes, the Petra News Agency published on Sunday what it described as exclusive comments from Saudi Deputy Crown Prince Mohammed bin Salman which included a claim that Riyadh has provided 20 percent of the total funding to the prospective Democratic candidate’s campaign.

The report was later deleted and the news agency has not responded to requests for comment from Middle East Eye. However, the deletion took place too late, as the Washington-based Institute for Gulf Affairs managed to capture the report and has re-published the original Arabic Petra report, which quoted Prince Mohammed as having said Saudi Arabia had provided with “full enthusiasm” an undisclosed amount of money to Clinton.

The pdf of the report is shown below:

Below is a screenshot of the English report published, and then quickly deleted, by the Petra News Agency: 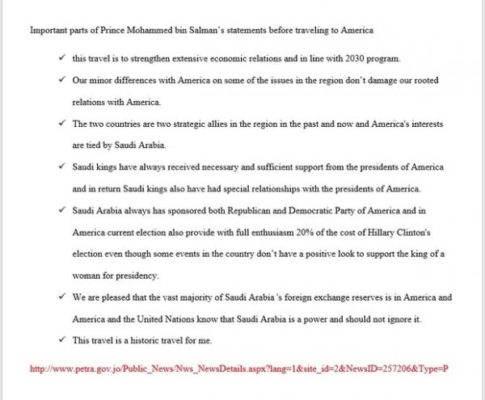 As a reminder, It is illegal in the United States for foreign countries to try to influence the outcome of elections by funding candidates. That appears not to have stopped the Saudis, however.

“Saudi Arabia always has sponsored both Republican and Democratic Party of America and in America current election also provide with full enthusiasm 20 percent of the cost of Hillary Clinton’s election even though some events in the country don’t have a positive look to support the king of a woman (sic) for presidency,” the report quoted Prince Mohammed as having said.

According to the US Federal Election commission, over the past two years Clinton has raised a little more than $211.8 million. 20% of this sum is $42.4 million.

The report was published (and then mysteriously deleted) on the eve of Prince Mohammed making an official visit to the United States. The Saudi Press Agency reported on Monday that the senior royal was due to fly to Washington where he will meet officials to discuss US-Saudi ties.

He will remain in the American capital until 16 June, when he will travel to New York for meetings with financial companies, the Saudi Gazette reported.

Prince Mohammed will discuss regional issues with American officials, and he will hold talks with the financial companies about his vision for diversifying Saudi Arabia’s economy away from oil dependency.

Links between Saudi Arabia and the Clinton family, including with Hillary’s campaign, are well reported. In 2008, it was revealed that the Gulf kingdom had donated between $10m and $25m to the Clinton Foundation, a charity set up by Hillary’s husband and former US President Bill Clinton.

Last year the Centre for Studies and Media Affairs at the Saudi Royal Court paid public relations firm the Podesta Group $200,000 for a month-long project to provide “public relations services”.

The Podesta Group was founded in 1988 by brothers John and Tony Podesta. John Podesta is the chair of Hillary Clinton’s campaign to become the next US president.

Finally, in connection to the Orlando shooting, the WSJ reported that according to a spokesman for Saudi Arabia’s interior ministry, the Orlando shooter, Omar Mateen visited the kingdom twice on pilgrimage.

Mateen visited Saudi Arabia in 2011 and again in 2012 to perform umrah, a religious pilgrimage to the holy city of Mecca. The trips lasted eight and 10 days each.

U.S. and Saudi officials aren’t sure yet who Mr. Mateen met with during his visits or whether the trips were connected to the shooting.

Hillary Clinton’s campaign did not respond to MEE’s request for comment at the time of publication. Considering Hillary hasn’t given a full press interview in over 7 months, we doubt this will change.