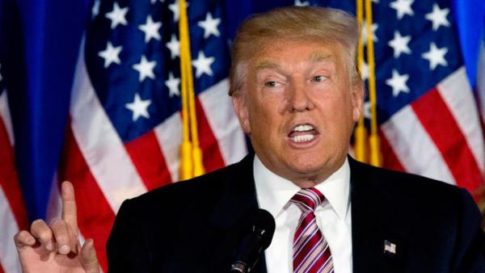 – “I Refuse To Be Politically Correct” – Trump Slams Obama, Hillary; Would Use Executive Order To Suspend Immigration:

In a much anticipated speech in which Trump was set to rekindle his anti-immigration momentum, earlier today the repuglican candidate did not disappoint and, as expected, ripped Hillary Clinton and President Obama for pushing policies and language that he said were making the U.S. less secure and increased the likelihood of terrorist attacks on the homeland.

Speaking at St. Anselm University in New Hampshire one day after the worst mass shooting in history after a gunman who pledged allegiance to ISIS killed 49, Trump put much of the blame on U.S. immigration policies that allowed the shooter’s parents to enter the country. He also asserted there are thousands of people living in the United States “sick with hate” and capable of carrying out just this sort of massacre.  He also criticized Obama and Clinton for arguing for stronger gun control laws, saying that would make terrorist acts more likely.

Trump said Obama and Clinton were putting “political correctness” above U.S. security in making their push. He also repeated his arguments that both should describe the U.S. as at war with radical Islam.

“I refuse to be politically correct. I want to do the right thing, I want to straighten things out, and I want to make America great again. The days of deadly ignorance will end, and they will end soon, if I’m elected,” Trump raged before thousands, adding that he would end immigration from areas in the world from which people have attacked the U.S. and its allies, and attacking Hillary Clinton and President Barack Obama for being weak on immigration. He also said that he would use an executive order to suspend immigration if it came to that.

With fifty people dead, and dozens more wounded, we cannot afford to talk around the issue anymore — we have to address it head on. I called for a ban after San Bernardino, and was met with great scorn and anger but now, many are saying I was right to do so — and although the pause is temporary, we must find out what is going on. The ban will be lifted when we as a nation are in a position to properly and perfectly screen those people coming into our country.

As quoted by The Hill, Trump also called on Obama to release “the full and complete immigration histories” of anyone implicated in terror activities since September 11, 2001, to better inform the public.  As he hinted with his tweets and official statement yesterday, Trump harshly criticized Obama for referring Sunday to a “terror” attack without going further. “He’s not calling it what it is,” Trump said. “This is radical Islamic terrorism. He doesn’t want to properly describe it. And if you don’t want to discuss it and describe it, you’re not going to solve the problem.”

He then bashed Hillary Clinton for failing to recognize the threat of radical Islamic terror, arguing that her “total denial and reluctance to ever name the enemy broadcasts weakness throughout the entire world.”

“Hillary Clinton’s catastrophic immigration plan will bring vastly more radical Islamic immigration into this country, threatening not only our society but our entire way of life.

“This is a very dark moment in America’s history: A radical Islamic terrorist targeted the nightclub, not only because he wanted to kill Americans, but in order to execute gay and lesbian citizens for their sexual orientation… It’s strike at the heart and soul of who we are as a nation. It’s an assault on the ability of free people to live their lives, love who they want and express their identity.”

He then attacked Clinton for trying to have it both ways in supporting the LGBT community, arguing that she can’t consider herself an ally if she supports immigration policies that could allow potentially dangerous people into the country.

“Hillary Clinton can never claim to be a friend of the gay community as long as she continues to support immigration policies that bring Islamic extremists to our country and suppress women, gays and everyone else who shares their beliefs or values,” he said.

“Ask yourself, who is really the friend of women and the LGBT community: Donald Trump with his actions, or Hillary Clinton with her words?”

Trump’s hardline approach to fighting Islamic terrorism was a hallmark of his primary campaign. Besides proposing a temporary prohibition on foreign Muslims from entering the country, he has advocated using waterboarding and other harsh interrogation methods to try to stave off future attacks.

While some Republican leaders have encouraged Trump to abandon his proposed Muslim ban in an effort to broaden his support among voters before November’s general election, the Orlando attack appeared Sunday to harden the billionaire businessman’s position.

“What has happened in Orlando is just the beginning,” Trump tweeted Sunday. “Our leadership is weak and ineffective. I called it and asked for the ban. Must be tough.”

A full transcript of Trump’s speech below