Yet another famous “Holocaust survivor” in the US, 90-year-old Joseph Hirt, who has spent fifteen years lecturing schools about his “escape from Auschwitz,” has been shown to be a fantasist liar who invented everything. 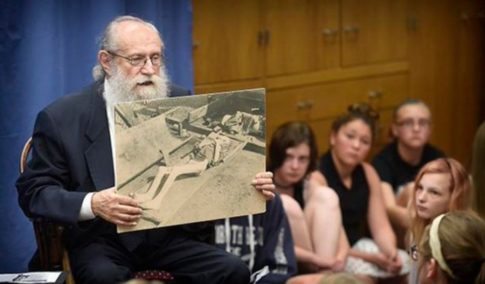 Hirt’s career in lying and making up “holocaust” stories goes to 2006, when he was the subject of an article in Philadelphia’s Inquirer newspaper.

The article, titled “Facing the ghosts of the Holocaust,” and filed under that paper’s “racial hatred” section, quotes Hirt as saying that had grown up in a Jewish family in Poland, was sent to Auschwitz, given prisoner number tattoo I94517, but “spared the gas chamber because he identified himself as a nurse and was pressed into service by a doctor who was himself a camp inmate.” 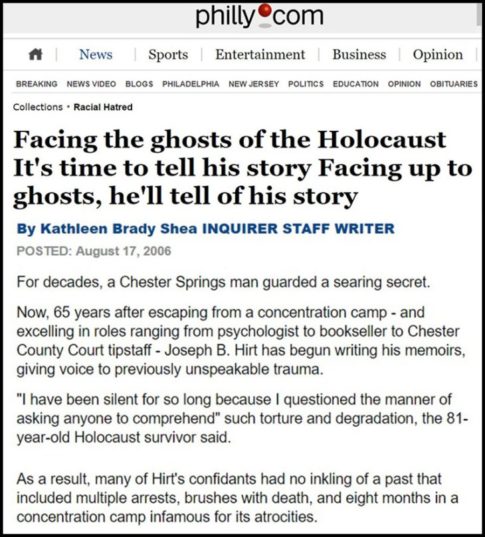 Hirt kept on peddling this story for years, eventually becoming a firm favorite on the “holocaust survivor circuit.”

For example, in December 2014, he told the Central Pennsylvania World War II Roundtable that he had escaped Auschwitz after eight months by crawling under an electric fence; and that upon his liberation he weighed a mere 60 pounds—”a skeleton with skin.”

Hirt also started producing a photograph of an emaciated man lying on stretcher, claiming it was himself. This picture became one of his stock props in his “lectures.” 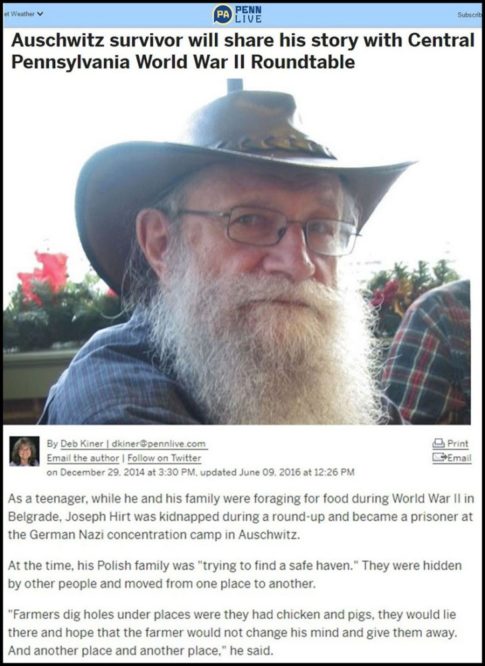 He also said he came “face to face with the so-called Angel of Death, Dr. Josef Mengele, while at Auschwitz,” and that he had also “attended the Olympics in 1936 in Berlin with his father where he saw Adolf Hitler refuse to shake hands with American Olympian Jesse Owens. ‘The thing is that made me a witness to history. I was there. I saw it,’ Hirt said.”

Just this year, however, a Pennsylvania school teacher who was at first drawn to hear this “survivor account” firsthand, had the bravery—and ability—to research Hirt’s claims.

A story in the Reading Eagle, and copied onto the PA live website revealed that Andrew Reid, a local history teacher in Turin, NY, attended Hirt’s lecture on April 15 in nearby Lowville.

But Reid was struck by discrepancies in Hirt’s version of events and in the evidence Hirt provided in support of his claims.

In a document put up on Scribd, Reid revealed that Hirt claims to have been captured by Nazis and sent to Auschwitz in 1941. He has said in various accounts that he escaped from Auschwitz in March 1942— specifically, March 31, 1942, which he remembered because it was his father’s birthday.

However, the prisoner number tattooed on Hirt’s upper left forearm belongs to a Polish person who entered Auschwitz in 1944, Reid says, citing officials at the Auschwitz-Birkenau State Museum. Those same officials confirmed this information to PennLive on Thursday.

The US Holocaust Memorial Museum website also says the practice of placing tattoos on the inside of the upper left forearm of Auschwitz prisoners, where Hirt’s is located, did not begin until 1943, years after he claims to have arrived.

As for Hirt’s escape, Reid said officials at the Auschwitz-Birkenau State Museum told him that there was only “one escape recorded in the months surrounding Hirt’s alleged date of escape, and that person was not him.

There is also the photo frequently displayed by Hirt at his speaking engagements which he claims was taken by an Auschwitz guard and which shows him emaciated and on a stretcher shortly before his escape in 1942. However, that photograph, according to Reid, was actually taken by a US soldier liberating Dachau concentration camp.

Reid’s document includes critical quotes from members of Hirt’s own family who dismiss his Auschwitz claims as false.

“The stories … are complete fabrications with regard to the Auschwitz stuff,” Michael Hirt, a nephew of Joseph’s, is quoted as saying.

“When I confronted him, he basically claimed that the stories were taken out of context, or that the authors fabricated the stories. Of course I do not believe this … Perhaps he might be shamed into stopping, although of course the damage is already done.”

Reid also dismisses Hirt’s claim of a face-to-face encounter with Dr. Josef Mengele at Auschwitz before March of 1942, saying “it is well-documented that Mengele did not arrive at Auschwitz until May 1943,” more than a year later.

Reid also said Hirt falsely claimed that he attended the 1936 Olympics in Germany and was sitting close enough to hear Hitler disparage gold medalist Jesse Owens, something that all historians now know did not happen.