It appears the reality of the rising probability of Britain leaving the EU is dawning on the rest of Europe. So much so in fact that Germany’s Der Spiegel magazine unleashes an English-language front-page urging “Please Don’t Go! – Why Germany needs the British.” 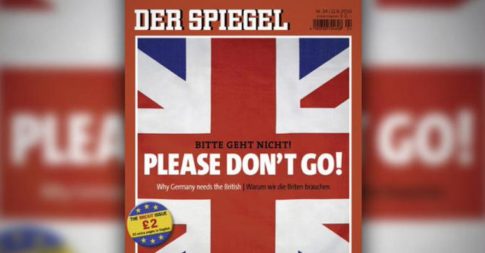 As KeepTalkingGreece reports, the special edition with the English title will be sold in in the UK at a reduced price of 2 BP (2.90 euros).

Editor-in-chief of the weekly,

‎Klaus Brinkbäumer, said that the central article of the magazine will include several arguments why the European Union can not manage without Britain. “The result is an objective and simultaneously strong, moving -and bilingual- appeal to the country: Please do not leave!” the editorial team said in a statement today.The central article describes the important role Britain played in defining the European Union and analyzes the impact of a Brexit to Europe’s security, its ability to fight terrorism and geo-strategic weight.

Why Germany needs the British? Because sometimes it is “the size that matter. UK is not Greece and it cannot be blackmailed by the European Central Bank,” as eurozone critic, Italian journalist Alessandro Del Prete ‏@alexdelprete noted on Twitter.

And because, once the Brexit happens, with the Euroscepticism nowadays, Germany fear that other member states might see themselves forced to hold similar Referenda. 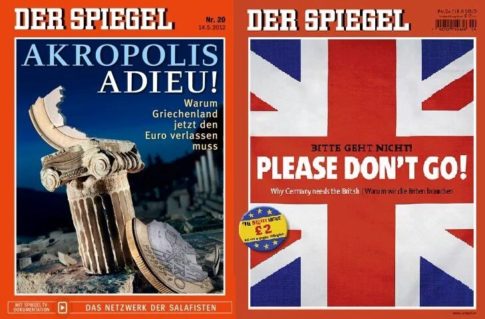 Down on their knees Germans beg UK to not Brexit. Does this have to do with the bonds between the British Royals and the official not existent but unofficial still very respectable German Aristocracy? No, it has to do with the fear that a Brexit could trigger the EU collapse.

Already, German Finance Minister Wolfgang Schaeuble gave much to lengthy interview to SPIEGEL where he praised “Britain is a leading Nation” but at the same time he warned “No single market access for UK after Brexit.” Germany makes the rules and the British have the chance to put an end to it.

In the odd way that has become tradition in the EU, Schaeuble even went to UK to intervene in the decision process… oh sorry! to campaign against Brexit.

SPIEGEL: Minister Schäuble, you are the only top German politician who has travelled to Britain to campaign for the country to remain in the EU. Why is everyone else holding back? Is German support not welcome in Britain?

Schäuble: I also, of course, asked myself whether it is helpful for German politicians to be telling British voters what to do. I put the same question to my British counterpart, George Osborne, who had asked me to talk about the issue in London. He allayed my fears, and so I explained to the British public why I believe that it is better for the EU and Britain if voters decide against Brexit.

SPIEGEL: Polls show that the outcome of the June 23 referendum is completely up in the air. If the British vote against the EU, your project for achieving ever closer integration in Europe will be on the verge of failure.

Schäuble: I hope and believe that the British will ultimately decide against Brexit. The withdrawal of Britain would be a heavy loss for Europe.

But Germans are cooler than the politicians of their country.

In a poll conducted by the polling company TNS on behalf of the «Spiegel» 79% of Germans are in favor of Britain staying in the EU.

Just over 50% of respondents consider that the Brexit would not have a negative impact on the German economy compared with 36% who think that the situation of Europe’s largest economy will worsen. The poll which involved 1,025 people was conducted June 7-8 2016.

PS As a Greek, I’m not offended that Schaeuble wants UK to remain in the EU while his plan since 2011 has been the Grexit. I just criticize that a so-called serious and renowned magazine to be a tool in the hands of politicians. Just like Bild newspaper. The difference is in style.