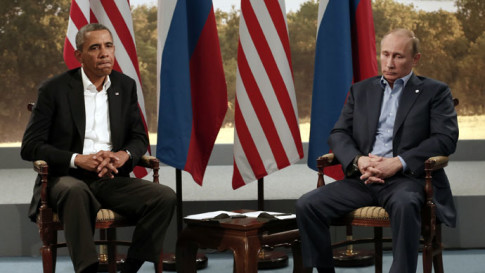 This week marks the official launch of NATO’s Anaconda-16 war games, calling for the largest assembly of foreign forces in Poland since World War II.

For nearly two weeks, 30,000 troops supported by several arsenals of vehicles, aircraft and ships will be deployed in one of the biggest exercises on NATO’s eastern flank since the end of the Cold War. While NATO is touting this move as training, the Russians are calling it the “summer of provocation,” and a move to reignite the Cold War intended to force Moscow to starve its domestic economy to ramp up its military to meet a growing external threat.

On Friday, the Russian foreign ministry warned of “retaliatory measures” over the entry of a U.S. naval destroyer in the Black Sea this week, the RIA news agency reported.

“From time to time, U.S. vessels enter the Black Sea. Obviously, we do not appreciate it and, undoubtedly, this will lead to retaliatory measures,” Andrei Kelin, a senior Foreign Ministry official, told the state-run RIA Novosti. He called the move on the eve of the NATO summit a “show of force.”

“As regards the overall situation, of course there is a definite increase and stoking of tensions in our relations,” Kelin said.

The operation is massive in scope and involves more than 20 NATO partner countries operating out of Poland. The underlying theme of the exercise is to reassure east European nations who are supposedly rattled by Russia’s actions in nearby Ukraine.

However, when Russia delivered humanitarian aid to victims of ethnic cleansing in Ukraine, the United States attempted to present the move as an invasion. But its inept propaganda quickly became apparent when evidence to back up the claim never materialized — it was nonexistent because it wasn’t true.

Ukrainian leader Petro Poroshenko’s ultranationalist goals to clamp down on the people of Eastern Ukraine who wished to retain their Russian culture were quickly reinforced with military action. As thousands of civilians were killed and millions fled the violence, Russia sent a convoy of aid in medical supplies and food. But due to lingering Cold War resentment by the U.S. government, the aid convoy suddenly became a Russian invasion — properly touted as such by every corporate media outlet and, of course, by then-Secretary General of NATO, Anders Fogh Rasmussen, as well as John Kerry.

Noting the ridiculous nature of a “Russian threat” last year, Putin explained, “I think that only an insane person, and only in a dream, can imagine that Russia would suddenly attack NATO,” adding, “I think some countries are simply taking advantage of people’s fears with regard to Russia.”

President Recep Tayyip Erdogan of Turkey, a NATO ally, said last month he complained to NATO Secretary General Jens Stoltenberg that the alliance needed to do more in the Black Sea to prevent Russian dominance in the area, the U.S. Naval Institute reported.

“I told him ‘You are absent from the Black Sea,’ ” Erdogan said in an address to Balkan military leaders. “The Black Sea has almost become a Russian lake. If we don’t act now, history will not forgive us.”

It seems that NATO is ignoring the obvious reason why Turkey opposes Russia and cares not about the rampant human rights abuses by Erdogan and his ties to ISIS.

As Vice President Joe Biden pointed out during a speech at Harvard in 2014, Turkey and Saudi Arabia had “poured hundreds of millions of dollars and thousands of tons of weapons into anyone who would fight against [Syrian President Bashar al-] Assad,” going on to point out that “the people who were being supplied were Al Nusra and Al Qaeda and the extremist elements of jihadis coming from other parts of the world.”

Though Russia couldn’t be mistaken for an angel, the military and White House’s ostensible fears appear largely bloated and mostly artificial as they have helped to snub out ISIS, and done absolutely nothing to the U.S. — up to and including irresponsible saber rattling.

The real intent behind this saber rattling is expanding military spending and supporting a Turkish tyrant, as a mere side effect of expanding the U.S. war machine. Retired U.S. Air Force Lt. Colonel Karen Kwiatkowski recently offered pertinent insight in an interview with RT about why Russia continues to be so vilified by the Pentagon and American media alike:

“The Pentagon needs and wants Russia to be the next big enemy that they are arming against it, budgeting against it, that they are targeting. Certainly, we have talked for a long time about China and China plays an important role as the enemy of choice for the U.S. military. But Russia is ideal in part, because we don’t import a lot of things from Russia, in part because we don’t have the debt relationship with Russia that we do with China. So, Russia makes for a very convenient enemy for the Pentagon in terms of its mission, its budgeting, and its intelligence organization.”

“The Pentagon needs that kind of enemy,” Kwiatkowski continued. “And [U.S. Secretary of Defense] Ashton Carter, if you listen to what he says continually — even from the beginning of time he was put in office — his job is fundraising, just like the university president’s job is not education but rather fundraising. Ashton Carter’s job is also fundraising, and he fundraises through this process of identifying, pushing, and delivering up an enemy that will justify their budgets.”

As Jay Syrmopulous pointed out earlier this year, the West wants Russia to be accepted as a subservient partner in the AngloZionist Empire, while the latter want to fully “sovereignize” Russia and then create a multi-polar international system with the help of China and the other BRIC countries.

If interventions into Syrian and Ukrainian politics were truly about democracy, freedom, and the rule of law — as feigned in the West — would they really be supporting Islamist extremist groups in Syria and neo-nazis in Ukraine?

Make no mistake that the potential for this conflict to spiral rapidly out of control and into a nuclear war type scenario is a clear and present danger.

On Monday, Loud & Clear’s Brian Becker sat down with security analyst Daniel McAdams, who summed up the situation perfectly: “The neoconservatives now have control of Russian policy, and I think they are pushing us towards World War III.”