Over the weekend we noted that US aircraft carrier, the USS Harry Truman, which has served as a launching point for a near-constant barrage of airstrikes on Islamic State targets in Iraq and Syria and which since November has accounted for a little more than half of the total sorties flown over those two countries by the U.S. military, recently crossed the Suez Canal in an unplanned trip to the Mediterranean, had begun striking at various Islamic State targets from the Mediterranean Sea. This marked the first time a carrier group has launched airstrikes from the area since the 2003 invasion in Iraq. 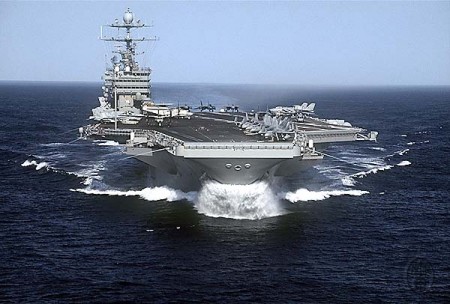 But it turns out the carrier strike group had another, far more important mission when it entered the Mediterranean. According to the WSJ, this 20-story-tall aircraft carrier with a crew of 5,000 made an unplanned diversion from the Gulf to the eastern Mediterranean last week: a quick pivot intended to send a clear message to Russia. A military official in Washington said the Truman’s shift was a signal to Moscow and a demonstration of the Navy’s operational flexibility and reach.

“It provides some needed presence in the Med to check…the Russians,” the official said. “The unpredictability of what we did with Truman kind of makes them think twice.”

Unless the Russians were planning on annexing the Mediterranean we somehow fail to see how this works. Ironically, what is meant to be a show of force, may be just as easily interpreted as a sudden onset of defensiveness. Why the sudden insecurity?

The Truman will not be the only US carrier in the region. According to RT, the US military presence in the Mediterranean has been boosted even further ahead of a NATO summit in Warsaw. The USS Dwight D. Eisenhower aircraft carrier strike group will allegedly support “US national security interests in Europe.” “The USS Dwight D. Eisenhower Carrier Strike Group (IKE CSG) entered the US 6th Fleet area of operations today in support of US national security interests in Europe,” the US European Command (EUCOM) has announced. 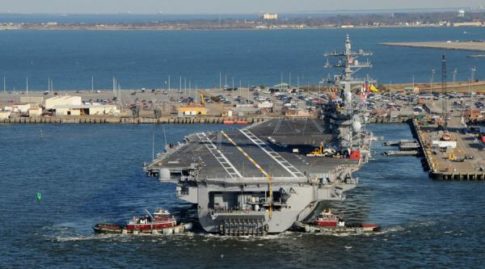 The carrier USS Dwight D. Eisenhower is to take the place of the USS Harry S. Truman that will head back to the United States, finishing its eight-month mission, Navy officials on board the Truman said, according to Reuters. In June, however, both carriers will be stationed in the Mediterranean simultaneously… just in case the message to Russia from just one carrier is lost in translation.

Washington claims that the increased military presence is aimed at fighting Islamic State and balancing Russian extensive military efforts. “The presence of two carrier strike groups in the Mediterranean Sea demonstrates our commitment to safety and security in the region,” the statement read. “These forces further serve to support European allies and partners, deter potential threats and are capable of conducting operations in support of the counter-ISIL [Daesh] mission.”

As the WSJ notes, Rear Adm. Bret Batchelder, the highest-ranking officer on the carrier, told visiting reporters this week that moving the “capital ship” of the U.S. Navy from the Gulf through the Suez Canal is a flexing of muscle meant to reassure North Atlantic Treaty Organization allies of the American commitment to maintaining the balance of naval power in the Mediterranean.  “It is a demonstration of capability. That’s for sure,” he said. “There are undoubtedly folks who are watching that and this is just a graphic representation of what we’re capable of.”

In other words, just as NATO launched Anaconda 2016, the biggest NATO drill involving tens of thousands of western troops in eastern Europe since the cold war, one meant to simulate a Russian invasion of the country, and taking place in stratgic proximity to Russia, the US felt the need to “demonstrate” US naval power too.

“The repositioning of the USS Harry S. Truman provides a window into American military strategy at a time when Russia has asserted itself aggressively in the region, using its navy and air force to turn the tide of the five-year Syria conflict in favor of President Bashar al-Assad.

The U.S. has shown a willingness to use powerful Navy vessels to make provocative political statements, as it did in 2015 when it sailed a destroyer through the South China Sea at the height of tensions with Beijing over China’s territorial claims there.

Russia has maintained a contingent of about 10 to 15 ships in the Mediterranean for three years because of the conflict in Syria. In March, state media said the country’s sole aircraft carrier would be sent to join those ships by summer.

Ironically, moving the Truman away from the Gulf means US air strikes on ISIS will be curbed. “The 75-plane fleet assigned to the ship responds to calls from allies on the ground for airstrikes. Starting in the early morning and lasting well into the night, F/A-18 jet fighters and E-2C Hawkeye surveillance planes take off using a steam-powered catapult to slingshot them off the short runway.”

Capt. David Little, commander of the air squadrons, said his fleet has been active recently over Fallujah, where Iraq’s military and allied militia forces have been engaged in an intense battle to uproot Islamic State from one of the first cities it occupied. Capt. Little declined to identify specific targets, but said the Truman’s airborne fleet has focused its firepower on Islamic State’s ability to wage war and he rattled off a list of the types of facilities the jet fighters have struck based on intelligence provided by partners on the ground.  “Where they store money, the oil refineries they steal the money from, the banks where they store and hide money, the factories where they produce vehicle-borne [improvised explosive devices],” he said.

In other words, doing precisely what Russia has been doing and at that much more efficiently.

Putting Russia in its place aside, the new position may actually serve a strategic purpose. Adm. Batchelder said the ship’s position in the Mediterranean could make it a vital asset if the U.S. and its allies were to begin operations against Islamic State in Libya. The U.S. is contemplating operations in the oil-rich North African country. Which, we believe, is precisely what the ship is there for, as the US prepares to “liberate” Libya for a second time.

In any event, while the US may be hoping to “check” the Russians, all this action which will be seen as the latest provocation by the Kremlin will do is further strain already chilly relations between Russia and the US. “I don’t think that Russia is interested in practical cooperation with NATO more than NATO itself,” the head of the State Duma Committee for International Relations, Aleksey Pushkov said, according to RIA Novosti. “Claiming that Russia should seek cooperation with NATO, which would be the one to decide whether it will happen or not, is absurd.”

We expect Russia to respond by promptly deploying warships of its own to the Mediterranean in a repeat of the summer of 2013 when the beach off the Syrian coast was a parking lot of Russian, US, European and even Chinese warships.

2 thoughts on “U.S. Deploys Two Aircraft Carriers To Mediterranean To “Send A Clear Message To Russia””