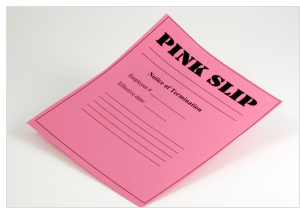 – Mass Layoffs To Return With A Vengeance:

How safe is your job?

Remember the mass layoffs of 2008-2009? The US economy shed millions of jobs quickly and relentlessly, as companies died and the rest fought for survival.

Then the Fed and the US government flooded the banks and the corporate sector with bailouts and handouts. With those giga-tons of liquidity sloshing around, as well as taking on massive amounts of new cheap debt, companies were able to finance their working capital needs, hire workers back, and even buy-back their shares en mass to make themselves look deceptively profitable. The nightmare of 2008 soon became a golden era of ‘recovery’.

Well, 2016 is showing us that that era is over. And as stock prices cease to rise, and in fact fall within many industries, layoffs are beginning to make a return as companies jettison costs in attempt to reduce losses.

Since January 1st, here is but a subset of the headlines we’ve seen:

Note that nearly all of these companies are in the Energy, Finance and Tech sectors — the three biggest engines of growth, profits and market value appreciation within the economy over the past 7 years.

What will the repercussions be if those three industries go into contraction mode at the same time?

Whatever the specifics may be, the general answer is easy to predict: Nothing good.

This topic has particular relevance to me today, as my former employer Yahoo! just announced that it’s cutting 15% of its workforce (1,700 jobs) and considering putting itself up for sale. This is no shock to me, as I’ve long publicly predicted Yahoo!’s inexorable swirl into irrelevance, but its timing is indicative of the new era the economy is now entering.

With its stake in Alibaba, Yahoo! participated in the mania that drove Chinese and other emerging market shares in 2014 through mid-2015. The capital that flooded into the Tech sector in general didn’t hurt, either. Both of these helped mask the business’ broken fundamentals and kept the day of reckoning for its lack of demonstrable progress at bay. But no longer.

As Warren Buffet famously quipped: Only when the tide goes out do you discover who’s been swimming naked. Well, with the collapse of the Asian stock markets last year and the entire global market so far this year, the tide is fast receding and the rot at Yahoo! is now plainly visible to all. How much rot? During its earnings call yesterday, the company announced it’s taking a write-down of $4.5 billion. That’s nearly as much as it made in top-line revenue for all of 2015!

Yahoo! is one of the weaker players in Tech these days, and it’s now stumbling hard. Here at Peak Prosperity, we predict that collapse happens ‘from the outside in’, where the weaker parties fall first, followed by the demise of stronger and stronger players. We’ve been seeing that happen internationally over the past year as smaller poorer countries succumbed first to slowing global economic growth, and we’re now seeing larger and more developed countries become desperate (Japan, anyone? How about Italy?). Yahoo! is a similar harbinger for the Tech sector, and is being fast joined by the many Tech companies in the list of headlines above (by the way, there are *many* more Tech companies I could easily add to that list — like HP who announced job cuts of 85,000 last fall).

And there’s good argument to be made that mass layoffs in Tech will be worse today than back in 2008/9. Back then, there were fast-expanding private future behemoths one could jump to: Facebook, Palantir, Uber and the like. Even Google, Netflix and Amazon held up well and were still investing for growth during that period. Today, there is no ready stable of up-and-comers with similar potential to power through a recession.

The ability for those laid-off to find open positions elsewhere will likely be more similar to the 2000 Tech bubble burst. Working in Silicon Valley back then, I was amazed at how fast 101 changed from a crawling bumper-to-bumper experience to an uncrowded freeway. The number of jobs (and thus commuters) that vaporized quickly was astonishing.

And that’s just Tech. As Chris has been warning us loudly, something is deeply amiss in the Financial sector. It’s mind-boggling that the biggest of the “too-big-to-fail” banks, like Citibank and Bank of America, have lost 25% of their market value in a little over 1 month(!). Deutsche Bank has lost over 33% over the same short period. All while the general market is down about 8%.

What these prices are telling us is that something big, ugly and damaging is happening within the banking sector. We just don’t know exactly what yet. And if you remember your history, this is eerily similar to how things went south so quickly in 2008. The banks started catching the sniffles, and soon after, Hank Paulson was on his knees begging Congress for the authority to stave off a full meltdown of the banking system.

And then there’s Energy. Can it be that the price of a barrel of oil was over $70 just 10 months ago? And over $100 five short months before that? Yesterday it was below $30. As we’ve been warning about here at Peak Prosperity, the carnage that collapse in price is going to wreak across the highly-leveraged companies in the Energy sector is going to be biblical. Not to mention the many other sectors that service the energy industry (trucking, housing, retail, infrastructure development, etc). We are just beginning to see the very early-stage ramifications, but in the words of Bachman Turner Overdrive: You ain’t seen nothin’ yet.

My point here is that the worm has turned.

All the stimulus and intervention undertaken by the Fed et al gave us five pleasant years (2010-2014) of rising stock, bond and home prices that allowed us to pretend that the 2008 credit crisis was a one-time event.

2015 proved to be the year that reality intervened. The rocket ride we were on hit its zenith, and things hung precariously there.

2016 is fast proving to be the year that the laws of physics are starting to matter again, and our rocket is now beginning its descent back to Planet Earth. How far we fall this year vs next is still unknown, but the direction of the trajectory is becoming increasingly hard to dispute. And as we lose altitude, we’re going to start losing jobs along with it.

So, for anyone reading this who is a salaried employee, a very important question to ask yourself is: Do I have a Plan B in place if I get unexpectedly laid off this year or next?

I’m not trying to frighten anyone unnecessarily. But I do see the probability of wide-scale jobs losses as materially higher this year than it was just a few short months ago. And with the headlines in the news today, things can easily accelerate further from here.

If you do not have a confidence-inspiring Plan B lined up yet, remember that the best time to plan for crisis is before it arrives. Spend time asking yourself what you would do in the aftermath of a pink slip. Save a greater percentage of your income, line up professional contacts, conduct informational interviews, and develop any needed new skills now — so that if you ever do need to turn to them, they’re already there to support you. A lot of the process for doing this is detailed in our book on career transition, and our related podcasts with career coach Jennifer Winn and the Johnson O’Connor Foundation are helpful resources, too.

Investing in the other Forms of Capital (besides money) that we detail in Prosper! will only help add to your resilience, as well. Especially Emotional Capital. Dealing with job loss is stressful by itself, but potentially doing so in the midst of another punishing Great Recession would place challenging strain on any of us. Working to improve our emotional ability to deal with setback, as well as perhaps doing the same with Social Capital — ensuring you have a community to support you through any tough times — just makes good sense.