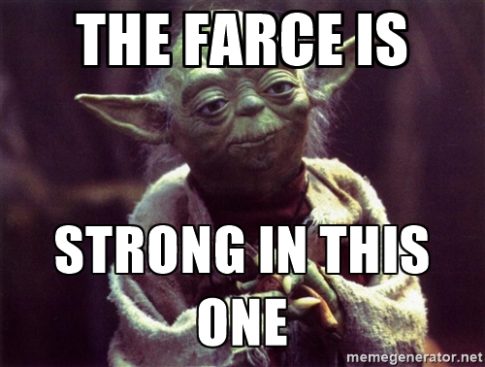 If ever you needed any more proof the captured MSM is nothing but a mouthpiece for the establishment, you got it yesterday. Hillary Clinton, the hand picked surrogate for the crony capitalists, military industrial complex and Wall Street, was declared the winner of the Democratic nomination because some shadowy super delegates supposedly threw their support to her. What a load of bullshit. Hillary was going to lose the California primary today. That would be a huge black eye for her floundering campaign.

The establishment needed to make the votes in California meaningless and keep people from even voting. So they declared her the winner. The timing was calculated. The AP headline and story was written days ago. They waited until the day before the primary to pull the rug out from Sanders and his supporters. Sanders and his people should turn Philadelphia into a war zone at the convention in July. The ruling oligarchy has rigged the game folks and they are telling you your vote doesn’t matter.

Last night, Associated Press – on a day when nobody voted – surprised everyone by abruptly declaring the Democratic Party primary over and Hillary Clinton the victor. The decree, issued the night before the California primary in which polls show Clinton and Bernie Sanders in a very close race, was based on the media organization’s survey of “super-delegates”: the Democratic Party’s 720 insiders, corporate donors and officials whose votes for the presidential nominee count the same as the actually elected delegates. AP claims that super-delegates who had not previously announced their intentions privately told AP reporters that they intend to vote for Clinton, bringing her over the threshold. AP is concealing the identify of the decisive super-delegates who said this.

Although the Sanders campaign rejected the validity of AP’s declaration – on the ground that the super-delegates do not vote until the convention and he intends to try to persuade them to vote for him – most major media outlets followed the projection and declared Clinton the winner. 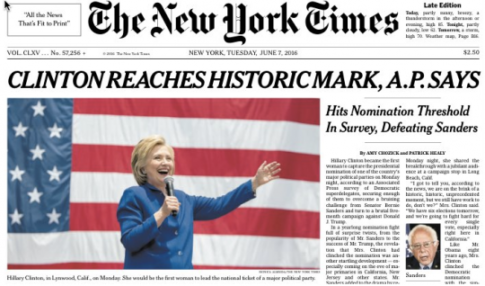 This is the perfect symbolic ending to the Democratic Party primary. The nomination is consecrated by a media organization, on a day when nobody voted, based on secret discussions with anonymous establishment insiders and donors whose identity the media organization – incredibly – conceals. The decisive edifice of super-delegates is itself anti-democratic and inherently corrupt: designed to prevent actual voters from making choices that the party establishment dislikes. But for a party run by insiders and funded by corporate interests, it’s only fitting that their nomination process ends with such an ignominious, awkward and undemocratic sputter.

None of this is to deny that Hillary Clinton – as was always the case from the start – is highly likely to be the legitimately chosen winner of this process. It’s true that the party’s governing rules are deliberately undemocratic; unfair and even corrupt decisions were repeatedly made by party officials to benefit Clinton; and the ostensibly neutral Democratic National Committee (led by the incomparably heinous Debbie Wasserman Schultz) constantly put not just its thumb but its entire body on the scale to ensure she won. But it’s also true that under the long-standing rules of the Party, more people who voted preferred Clinton as their nominee over Sanders. Independent of super-delegates, she just got more votes. There’s no denying that.

And just as was true in 2008 with Obama’s nomination, it should be noted that standing alone – i.e., without regard to the merits of the candidate – Clinton’s nomination is an important and positive milestone. Americans, being Americans, will almost certainly overstate its world significance and wallow in excessive self-congratulations: many countries on the planet have elected women as their leaders, including many whose close family member had not previously served as president. Nonetheless, the U.S. presidency still occupies an extremely influential political and cultural position in the world. Particularly for a country with such an oppressive history on race and gender, the election of the first African-American president and nomination of the first female presidential candidate of a major party is significant in shaping how people all over the world, especially children, view their own and other people’s potential and possibilities. But that’s all the more reason to lament this dreary conclusion.

That the Democratic Party nominating process is declared to be over in such an uninspiring, secretive, and elite-driven manner is perfectly symbolic of what the party, and its likely nominee, actually is. The one positive aspect, though significant, is symbolic, while the actual substance – rallying behind a Wall-Street-funded, status-quo-perpetuating, multi-millionaire militarist – is grim in the extreme. The Democratic Party got exactly the ending it deserved.