“We think there is very low potential for a human brain to grow, but this is something we will be investigating.” 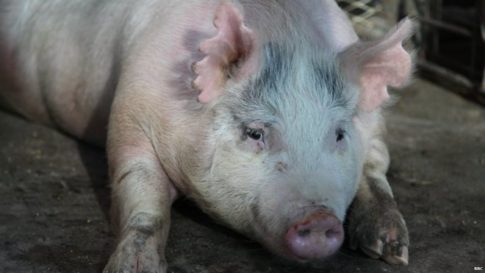 – US bid to grow human organs for transplant inside pigs:

Scientists in the United States are trying to grow human organs inside pigs.

They have injected human stem cells into pig embryos to produce human-pig embryos known as chimeras.

The embryos are part of research aimed at overcoming the worldwide shortage of transplant organs.

The team from University of California, Davis says they should look and behave like normal pigs except that one organ will be composed of human cells.

The human-pig chimeric embryos are being allowed to develop in the sows for 28 days before the pregnancies are terminated and the tissue removed for analysis.

The BBC’s Panorama was given access to the research for Medicine’s Big Breakthrough: Editing Your Genes.

Creating the chimeric embryos takes two stages. First, a technique known as CRISPR gene editing is used to remove DNA from a newly fertilised pig embryo that would enable the resulting foetus to grow a pancreas.

This creates a genetic “niche” or void. Then, human induced pluripotent (iPS) stem cells are injected into the embryo. The iPS cells were derived from adult cells and “dialled back” to become stem cells capable of developing into any tissue in the body. 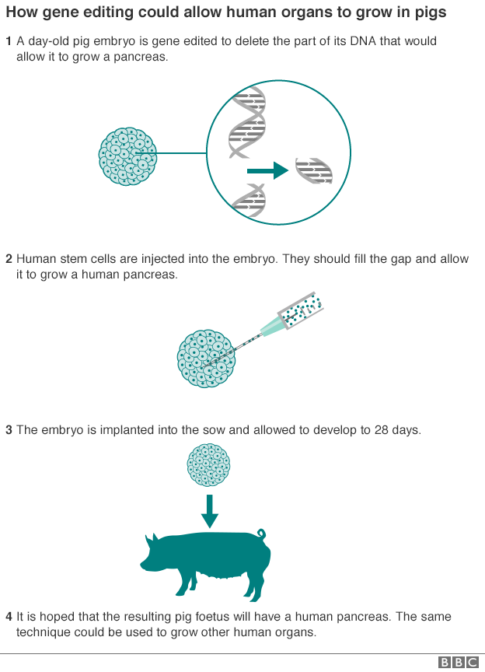 The team at UC Davis hopes the human stem cells will take advantage of the genetic niche in the pig embryo and the resulting foetus will grow a human pancreas.

Pablo Ross, a reproductive biologist who is leading the research told me: “Our hope is that this pig embryo will develop normally but the pancreas will be made almost exclusively out of human cells and could be compatible with a patient for transplantation.”

But the work is controversial. Last year, the main US medical research agency, the National Institutes of Health, imposed a moratorium on funding such experiments. 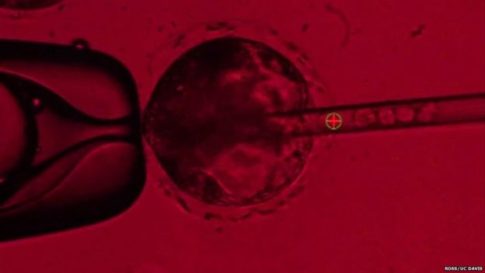 The main concern is that the human cells might migrate to the developing pig’s brain and make it, in some way, more human.

Pablo Ross says this is unlikely but is a key reason why the research is proceeding with such caution: “We think there is very low potential for a human brain to grow, but this is something we will be investigating.”

His team has previously injected human stem cells into pig embryos but without first creating the genetic niche. Prof Ross said although they later found human cells in several parts of the developing foetus, they “struggled to compete” with the pig cells. By deleting a key gene involved in the creation of the pig pancreas, they hope the human cells will have more success creating a human-like pancreas.

Other teams in the United States have created human-pig chimeric embryos but none has allowed the foetuses to be born.

Walter Low, professor in the department of neurosurgery, University of Minnesota, said pigs were an ideal “biological incubator” for growing human organs, and could potentially be used to create not just a pancreas but hearts, livers, kidneys, lungs and corneas.

He said if the iPS cells were taken from a patient needing a transplant then these could be injected in a pig embryo which had the key genes deleted for creating the required organ, such as the liver: “The organ would be an exact genetic copy of your liver but a much younger and healthier version and you would not need to take immunosuppressive drugs which carry side-effects.”

But Prof Low stressed that the research, using another form of gene editing called TALENs, was still at the preliminary stages, trying to identify the target genes which must be removed in order to prevent the pig from developing a particular organ.

His team is also trying to create dopamine-producing human neurons from chimeric embryos to treat patients with Parkinson’s disease.

These embryos have been allowed to develop for up to 62 days – the normal gestation period is around 114 days.

Like the team in California, Prof Low said they were monitoring the effects on the pig brain: “With every organ we will look at what’s happening in the brain and if we find that it’s too human like, then we won’t let those foetuses be born”.

Gene editing has revitalised research into xenotransplantation, and the concept of using animal organs for humans.

In the mid-90s there were hopes that genetically modified pigs might provide an endless supply of organs for patients, and that cross-species transplants were not far off.

But clinical trials stalled because of fears that humans might be infected with animal viruses.

Prof George Church, who led the research, told me: “It opens up the possibility of not just transplantation from pigs to humans but the whole idea that a pig organ is perfectible.

“Gene editing could ensure the organs are very clean, available on demand and healthy, so they could be superior to human donor organs.”

But organisations campaigning for an end to factory farming are dismayed at the thought of organ farms.

Peter Stevenson, from Compassion in World Farming, told me: “I’m nervous about opening up a new source of animal suffering. Let’s first get many more people to donate organs. If there is still a shortage after that, we can consider using pigs, but on the basis that we eat less meat so that there is no overall increase in the number of pigs being used for human purposes.”

In Greek mythology, chimeras were fire-breathing monsters composed of several animals – part lion, goat and snake. The scientific teams believe human-pig chimeras should look and behave like normal pigs except that one organ will be composed of human cells.

Scott Fahrenkrug, whose Minnesota-based company Recombinetics is teaming up on the chimera research with Prof Low, told me: “Perhaps the term chimera is going to take on a new meaning and it will be one that’s much more affectionate: chimeras will be seen to be what they are which is a saviour, given that they will provide, life-saving, sustaining organs for our patients.”

Seven thousand people in the UK are on the transplant waiting list and hundreds die each year before a donor can be found.