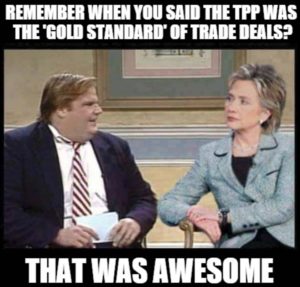 – Obama Administration Delays Release of Hillary Clinton TPP Emails Until After the Election:

And with Singapore and a growing list of other countries on both sides of the Pacific, we are making progress toward finalizing a far-reaching new trade agreement called the Trans-Pacific Partnership. The so-called TPP will lower barriers, raise standards, and drive long-term growth across the region. It will cover 40 percent of the world’s total trade and establish strong protections for workers and the environment. Better jobs with higher wages and safer working conditions, including for women, migrant workers and others too often in the past excluded from the formal economy will help build Asia’s middle class and rebalance the global economy. Canada and Mexico have already joined the original TPP partners. We continue to consult with Japan. And we are offering to assist with capacity building, so that every country in ASEAN can eventually join. We welcome the interest of any nation willing to meet 21st century standards as embodied in the TPP, including China.

You’d think the American pubic deserves to have access to this information before the election.

From the International Business Times:

Trade is a hot issue in the 2016 U.S. presidential campaign. But correspondence from Hillary Clinton and her top State Department aides about a controversial 12-nation trade deal will not be available for public review — at least not until after the election. The Obama administration abruptly blocked the release of Clinton’s State Department correspondence about the so-called Trans-Pacific Partnership (TPP), after first saying it expected to produce the emails this spring.

The decision came in response to International Business Times’ open records request for correspondence between Clinton’s State Department office and the United States Trade Representative. The request, which was submitted in July 2015, specifically asked for all such correspondence that made reference to the TPP.

Of course, we all know where she really stands on the TPP. She told us 45 times. See: Where Does Hillary Stand on the TPP? 45 Public Statements Tell You Everything You Need to Know.

The State Department originally said it estimated the request would be completed by April 2016. Last week the agency said it had completed the search process for the correspondence but also said it was delaying the completion of the request until late November 2016 — weeks after the presidential election. The delay was issued in the same week the Obama administration filed a court motion to try to kill a lawsuit aimed at forcing the federal government to more quickly comply with open records requests for Clinton-era State Department documents.

For more on Obama’s “most transparent ever” administration, see: