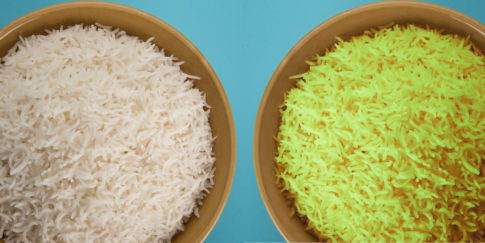 The article below appears just a couple of weeks after GMO zealot Matt Ridley published an Opinion piece in The Times titled, “Time to embrace GM crops… and reap the rewards”.

Ridley wrote: ”It is a disgrace that Greenpeace still campaigns against golden rice, a vitamin-enhanced variety that could save hundreds of thousands of lives a year.”

But a study published in April (abstract at the foot of this post) by Glenn Davis Stone, professor of anthropology and environmental studies at Washington University in St Louis, and Dominic Glover, a rice researcher at the Institute for Development Studies at the University of Sussex, shows that anti-GMO activists are not to blame for Golden Rice’s unfulfilled promises. The fact is that the rice still isn’t ready, after 24 years of research and  millions of dollars in funding.

GMWatch readers will be familiar with the fact that GM golden rice still isn’t ready and won’t be for several years, but it’s great to see the facts spelled out in a peer-reviewed publication.

As Prof Stone says in the article below, “If we are actually interested in the welfare of poor children — instead of just fighting over GMOs — then we have to make unbiased assessments of possible solutions. The simple fact is that after 24 years of research and breeding, Golden Rice is still years away from being ready for release.”

Heralded on the cover of Time magazine in 2000 as a genetically modified (GMO) crop with the potential to save millions of lives in the Third World, Golden Rice is still years away from field introduction and even then, may fall short of lofty health benefits still cited regularly by GMO advocates, suggests a new study from Washington University in St. Louis.

“Golden Rice is still not ready for the market, but we find little support for the common claim that environmental activists are responsible for stalling its introduction. GMO opponents have not been the problem,” said lead author Glenn Stone, professor of anthropology and environmental studies in Arts & Sciences.

First conceived in the 1980s and a focus of research since 1992, Golden Rice has been a lightning rod in the battle over genetically modified crops.

GMO advocates have long touted the innovation as a practical way to provide poor farmers in remote areas with a subsistence crop capable of adding much-needed Vitamin A to local diets. A problem in many poor countries in the Global South, Vitamin A deficiencies leave millions at high risk for infection, diseases and other maladies, such as blindness.

Some anti-GMO groups view Golden Rice as an over-hyped Trojan Horse that biotechnology corporations and their allies hope will pave the way for the global approval of other more profitable GMO crops.

GMO proponents often claim that environmental groups such as Greenpeace should be blamed for slowing the introduction of Golden Rice and thus, prolonging the misery of poor people who suffer from Vitamin A deficiencies.

In a recent article in the journal Agriculture & Human Values, Stone and co-author Dominic Glover, a rice researcher at the Institute for Development Studies at the University of Sussex, find little evidence that anti-GMO activists are to blame for Golden Rice’s unfulfilled promises.

“The rice simply has not been successful in test plots of the rice breeding institutes in the Philippines, where the leading research is being done,” Stone said. “It has not even been submitted for approval to the regulatory agency, the Philippine Bureau of Plant Industry (BPI).”

“A few months ago, the Philippine Supreme Court did issue a temporary suspension of GMO crop trials,” Stone said. “Depending on how long it lasts, the suspension could definitely impact GMO crop development. But it’s hard to blame the lack of success with Golden Rice on this recent action.”

While activists did destroy one Golden Rice test plot in a 2013 protest, it is unlikely that this action had any significant impact on the approval of Golden Rice.

“Destroying test plots is a dubious way to express opposition, but this was only one small plot out of many plots in multiple locations over many years,” he said. “Moreover, they have been calling Golden Rice critics ‘murderers’ for over a decade.”

Stone, an internationally recognized expert on the human side of global agricultural trends, was an early advocate for keeping an open mind about “humanitarian” GMO crops, such as Golden Rice.

He has also supported the development of a genetically modified strain of cassava, a starchy root crop eaten by subsistence farmers across much of Africa. Unfortunately, efforts to develop a genetically improved, more productive and disease-resistant strain of cassava also appear to be a long way from practical field introduction, he notes.

“Golden Rice was a promising idea backed by good intentions,” Stone said. “In contrast to anti-GMO activists, I argued that it deserved a chance to succeed. But if we are actually interested in the welfare of poor children — instead of just fighting over GMOs — then we have to make unbiased assessments of possible solutions. The simple fact is that after 24 years of research and breeding, Golden Rice is still years away from being ready for release.”

Since 2013, Stone has directed a major Templeton Foundation-funded research project on rice in the Philippines. His research compares Golden Rice to other types of rice developed and cultivated in the Philippines. These include high-yield “Green Revolution” rice strains developed in the 1960s in an effort to industrialize rice farming, and “heirloom” landrace varieties long cultivated on the spectacular terraces of the Cordillera mountains of northern Luzon.

As part of the Golden Rice initiative, researchers introduce genes into existing rice strains to coax these GMO plants into producing the micronutrient beta carotene in the edible part of the grain. The presence of beta carotene gives the genetically modified rice a yellow hue, which explains the “golden” in its name.

As Stone and Glover note in the article, researchers continue to have problems developing beta carotene-enriched strains that yield as well as non-GMO strains already being grown by farmers.

Researchers in Bangladesh also are in the early stages of confined field trials of Golden Rice, but it is doubtful that these efforts will progress any quicker than in the Philippines.

Even if genetic modification succeeds in creating a strain of rice productive enough for poor farmers to grow successfully, it’s unclear how much impact the rice will have on children’s health.

As Stone and Glover point out, it is still unknown if the beta carotene in Golden Rice can even be converted to Vitamin A in the bodies of badly undernourished children. There also has been little research on how well the beta carotene in Golden Rice will hold up when stored for long periods between harvest seasons, or when cooked using traditional methods common in remote rural locations, they argue.

Meanwhile, as the development of Golden Rice creeps along, the Philippines has managed to slash the incidence of Vitamin A deficiency by non-GMO methods, Stone said.
—

Disembedding grain: Golden Rice, the Green Revolution, and heirloom seeds in the Philippines

“Golden Rice” has played a key role in arguments over genetically modified (GM) crops for many years. It is routinely depicted as a generic GM vitamin tablet in a generic plant bound for the global South. But the release of Golden Rice is on the horizon only in the Philippines, a country with a storied history and complicated present, and contested future for rice production and consumption. The present paper corrects this blinkered view of Golden Rice through an analysis of three distinctive “rice worlds” of the Philippines: Green Revolution rice developed at the International Rice Research Institute (IRRI) in the 1960s, Golden Rice currently being bred at IRRI, and a scheme to promote and export traditional “heirloom” landrace rice. More than mere seed types, these rices are at the centers of separate “rice worlds” with distinctive concepts of what the crop should be and how it should be produced. In contrast to the common productivist framework for comparing types of rice, this paper compares the rice worlds on the basis of geographical embeddedness, or the extent to which local agroecological context is valorized or nullified in the crop’s construction. The Green Revolution spread generic, disembedded high-input seeds to replace locally adapted landraces as well as peasant attitudes and practices associated with them. The disembeddedness of Golden Rice that boosts its value as a public relations vehicle has also been the main impediment in it reaching farmers’ fields, as it has proved difficult to breed into varieties that grow well specifically in the Philippines. Finally, and somewhat ironically, IRRI has recently undertaken research and promotion of heirloom seeds in collaboration with the export scheme.