The Department of Homeland Security (DHS) is quietly transporting illegal immigrants from the Mexican border to Phoenix and releasing them without proper processing or issuing court appearance documents, Border Patrol sources tell Judicial Watch. The government classifies them as Other Than Mexican (OTM) and this week around 35 were transferred 116 miles north from Tucson to a Phoenix bus station where they went their separate way. Judicial Watch was present when one of the white vans carrying a group of OTMs arrived at the Phoenix Greyhound station on Buckeye Road. 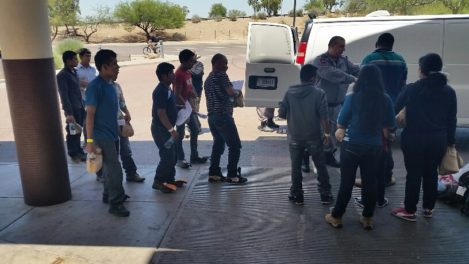 The OTMs are from Honduras, Colombia, El Salvador and Guatemala and Border Patrol officials say this week’s batch was in custody for a couple of days and ordered to call family members in the U.S. so they could purchase a bus ticket for their upcoming trip from Phoenix. Authorities didn’t bother checking the identity of the U.S. relatives or if they’re in the country legally, according to a Border Patrol official directly involved in the matter. American taxpayers pick up the fare for those who claim to have a “credible fear,” Border Patrol sources told JW. None of the OTMs were issued official court appearance documents, but were told to “promise” they’d show up for a hearing when notified, said federal agents with firsthand knowledge of the operation.

A security company contracted by the U.S. government is driving the OTMs from the Border Patrol’s Tucson Sector where they were in custody to Phoenix, sources said. The firm is called G4S and claims to be the world’s leading security solutions group with operations in more than 100 countries and 610,000 employees. G4S has more than 50,000 employees in the U.S. and its domestic headquarters is in Jupiter, Florida. Judicial Watch is filing a number of public records requests to get more information involving the arrangement between G4S and the government, specifically the transport of illegal immigrants from the Mexican border to other parts of the country. The photo accompanying this story shows the uniformed G4S guard that transported the OTMs this week from Tucson to Phoenix.

Outraged Border Patrol agents and supervisors on the front lines say illegal immigrants are being released in droves because there’s no room to keep them in detention. “They’re telling us to put them on a bus and let them go,” said one law enforcement official in Arizona. “Just move those bodies across the country.” Officially, DHS denies this is occurring and in fact earlier this year U.S. Customs and Border Protection Commissioner R. Gil Kerlikowske blasted Border Patrol union officials for denouncing this dangerous catch-and-release policy. Kerlikowske’s scolding came in response to the congressional testimony of Bandon Judd, chief of the National Border Patrol Council, the labor union that represents line agents. Judd told lawmakers on the House Judiciary Committee that illegal immigrants without serious criminal convictions can be released immediately and disappear into the shadows. Kerlikowske shot back, telling a separate congressional committee: “I would not stand by if the Border Patrol was — releasing people without going through all of the formalities.” 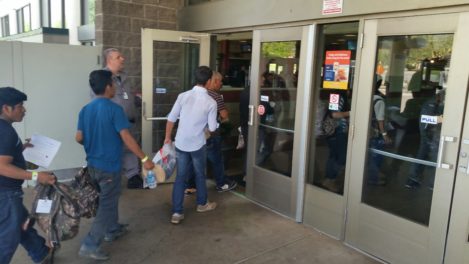 Yet, that’s exactly what’s occurring. This report, part of an ongoing Judicial Watch investigation into the security risks along the southern border, features only a snippet of a much broader crisis in which illegal aliens are being released and vanishing into unsuspecting American communities. The Senate Subcommittee on Immigration and the National Interest addressed this issue just a few weeks ago in a hearing called Declining Deportations and Increasing Criminal Alien Releases – The Lawless Immigration Policies of the Obama Administration. Judd, the Border Patrol Union chief, delivered alarming figures at the hearing. He estimated that about 80% of apprehended illegal immigrants are released into the United States. This includes unaccompanied minors who are escorted to their final destination, family units and those who claim to have a credible fear of persecution in their native country. Single males that aren’t actually seen crossing into the U.S. by Border Patrol agents are released if they claim to have been in the country since 2014, Judd added.

1 thought on “Department of Homeland Security Quietly Transporting And Releasing Vanloads Of Illegal Aliens Inside The U.S.”