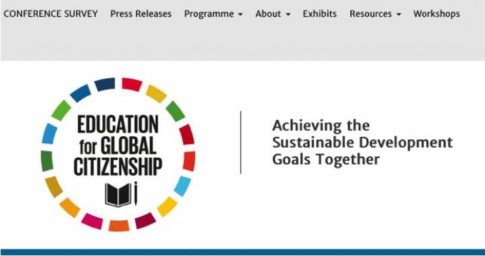 A United Nations summit in Korea this week adopted a global “action plan” demanding a planetary “education” regime to transform children around the world into social-justice warriors and sustainability-minded “global citizens.” Among other elements, that means the UN-directed global education must promote “integrated development” of the “whole person,” including the formation of their ethics, values, and spirituality, the final document declared. The global-citizenship programs, with definitions to be incorporated in curricula worldwide, should also indoctrinate children so that they understand their responsibilities to “protect the planet,” and promote what the UN and its member governments consider to be the “common good.”

The controversial action plan, approved by the UN’s propaganda department and a group of largely government-funded “non-governmental organizations” (NGOs) on June 1 in Gyeongju, Republic of Korea, is aimed at helping the UN impose its Agenda 2030 scheme to “transform the world.” In fact, the title of the summit gave away the agenda: “Education for Global Citizenship: Achieving the Sustainable Development Goals Together.” As The New American has documented extensively, the UN Agenda 2030 plan, also known as the “Sustainable Development Goals” (SDGs), was approved by governments and dictators last year as a road map toward global control (tyranny). From national and international wealth redistribution to government healthcare and legal abortion for all, the controversial Agenda 2030 vows repeatedly to leave “no-one behind.”

However, globalists and the UN know that to achieve their vision of global totalitarianism, the minds of the young must be captured via “education.” Agenda 2030 actually has an entire goal dedicated to UN-guided “education.” And so the latest summit in Korea, organized for NGOs by the UN Department of Public Information, or UN DPI, was aimed at defining what that “education” regime will look like — and how NGOs can help. “Education is a human right, essential to well-being and dignity, and is key to achieving Agenda 2030,” reads the action plan adopted this week. “Further, an ethos of global citizenship is required in order to fulfil [sic] this bold, people-centered, universal, and planet-sensitive development framework.”

In the “spirit of global citizenship,” the document declares that “our primary identity is that of human beings.” But the agenda is much broader than attacking nationalism and patriotism. The UN DPI and the Astro-Turf “NGOs” that surround it, styling themselves “Civil Society,” explained that what they call “education” must also be about more than what people normally think of as education — literacy, numeracy, and so on. In the UN’s view, according to the “Gyeongju Action Plan” adopted in Korea, “education must advance the cause of global citizenship.” That means a lot more than one might think, too.

Among other points, this education for global citizenship must promote “integrated development of the whole person emotionally, ethically, intellectually, physically, socially, and spiritually,” the action plan declares. (Emphasis added.) Of course, parents, families, communities, tribes, churches, and more have traditionally been responsible for much of that. When or under what authority government-run, UN-approved schools became responsible for children’s physical, ethical, spiritual, emotional, and social development was not made clear. The implications, though, should trouble anyone who values liberty, diversity, national sovereignty, and parental rights.

The “education” pushed by the UN must also be “imbued with an understanding of our roles, rights and responsibilities for the common good in service to humanity and the advancement of a culture of peace, non-violence, freedom, justice, and equality,” the action plan continued, using rhetoric about the “common good” that has been the rallying cry of countless tyrants. The globo-education must inculcate “a sense of care for the earth, reverence for the interdependent kinship of all life, and stewardship of all ecological systems for future generations.” It should also strengthen “the societal relationships among individuals, institutions, communities, states, humanity, and the planet.” And finally, it should nurture “a sense of solidarity and empathy in order to end poverty, protect the planet, ensure human rights, and foster prosperous and fulfilling lives for all.”

To those not well-versed in globalist-speak, that all might sound fine and dandy. However, when the UN’s agenda is examined more closely, the real agenda becomes more clear. Consider, as just one point among many, what the UN means when it speaks of “human rights.” In Article 29 of the UN’s “Universal Declaration of Human Rights,” the government signatories claim “rights” can be limited “by law” under the guise of everything from “public order” to “the general welfare.” In other words, you have no rights, only privileges. Separately, the same article claims that everyone has “duties to the community” and that “rights and freedoms” may “in no case be exercised contrary to the purposes and principles of the United Nations.” Compare that to the U.S. Constitution and the Declaration of Independence, which outline and protect God-given, inalienable rights.

Further down, the global action plan explains that the “education” agenda intends to shape every aspect of human life and civilization. “Education for global citizenship is an essential strategy to address global challenges as well as to promote gender equality, facilitate the eradication of poverty and hunger, build skills, eliminate corruption, and prevent violence, including violent extremism,” the document says. “It promotes truly sustainable production and consumption, mitigating climate change and its effects, protecting our waters and biodiversity, and preserving indigenous knowledge.”

If “tradition” and individual cultures get in the way of that agenda for UN-defined “human rights” and “global citizenship,” then “educational understandings” of those things will have to be “enhanced,” the action plan declares. The document also makes clear that this must be a worldwide effort, saying the global-citizenship scheming must be incorporated in school curricula worldwide and that “equitable quality education,” as defined by the UN, must be provided to “all people.” (Emphasis in original). The signatories vowed to work at the local level, too, to “incorporate education for global citizenship in educational systems.”

The signatories of the action plan, developed at the “66th United Nations Department of Public Information (DPI)/Non-Governmental Organization (NGO) Conference,” also committed to pushing global education that promotes a number of controversial concepts. “We commit to an education that teaches conflict resolution, a deep appreciation for diversity, ethical reasoning, gender equality, human rights and responsibilities, interdependence, multilingual and multicultural competence, social justice, sustainable development, and values,” it said. Those values, of course, are very unlikely to reflect the values of most parents around the world, whether they be Christian, Jewish, Muslim, Hindu, or any other major religious tradition. Instead, the values will be the values guiding the UN: globalism, pseudo-environmentalism, socialism, and more.

The UN Educational, Scientific, and Cultural Organization, or UNESCO, is at the center of the UN’s global “education” machinations. In addition to a partnership signed with Common Core-financier Bill Gates, UNESCO has been hard at work in its efforts to standardize and dumb-down education around the world. Among other schemes, it runs global programs on “Education for Sustainable Development,” “Educational for Global Citizenship,” and much more. It also has a “World Core Curriculum,” dedicated to and inspired by influential occultist Alice Bailey, that it hopes will guide schooling around the world in the years to come.

At a previous UN education summit, held last year in Korea, UNESCO boss Irina Bokova, a Bulgarian Communist Party operative who PR agents claim is among the “frontrunners” to lead the broader UN, also declared the UN’s intentions. “We have the collective duty to empower every child and youth with the right foundations — knowledge, values and skills — to shape the future as responsible global citizens, building on the successes of the past 15 years,” she said, adding that education would “transform lives” and contribute to “breakthroughs on all the proposed sustainable development goals.” In other words, the UN — not parents, families, or communities — believes that it has not just the right, but the “collective duty,” to shape your children’s values.

The latest conference on pushing Agenda 2030 through globalist indoctrination of children masquerading as “education” is a crucial follow-up to the adoption of the agenda itself. “Children and young women and men are critical agents of change and will find in the new Goals a platform to channel their infinite capacities for activism into the creation of a better world,” the official Agenda 2030 agreement explains.

“Sustainable” children for global citizenship in the new order will be accomplished via what the UN, the Obama administration, and others misleadingly refers to as “education.” In the UN document the word “education” alone is mentioned more than 20 times. And throughout the agreement, the UN openly advocates the use of schools to indoctrinate all of humanity into a new set of values, attitudes, and beliefs in preparation for the new “green” and “sustainable” world order. The UN’s education agenda also puts sex “education” front and center. “By 2030, ensure universal access to sexual and reproductive health-care services [abortion and contraception], including for family planning, information and education,” the document also explains.

For now, Americans, Europeans, and people around the world still have many options to protect their children from the global brainwashing campaign being pushed by the UN — home education, private schools, Christian schools, and more. However, the UN realizes that, too. And so, in recent years, under the phony guise of “human rights,” the UN has started agitating for government control and regulation of private and alternative forms of education in addition to its grip on “public” schools. The UN also continues to push international education agreements and schemes on everything from sex education and reading pedagogy to values and beliefs.

There is a good reason the UN is ridiculed by critics as the “dictators club.” Most of its member governments cannot be considered “free,” even under the most generous definition of the term. Allowing the UN to make and shape education policy is not just dangerous, then, it is crazy. Instead, education should be a job for families, communities, churches, charities, schools, and more — but primarily parents. The future of liberty literally depends on it.

UN: Gov’t Must Control Private Schools Because of “Human Rights”

UN, Obama, and Gates Are Globalizing Education Via Common Core