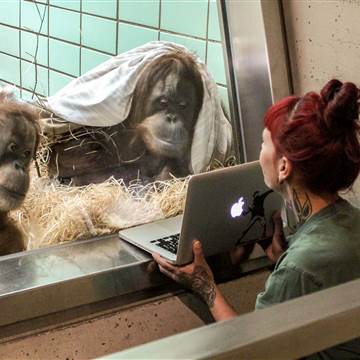 Modern dating is going to the apes. Literally.

A zoo in southern Germany has decided to give its orangutans more mating options through video dating.

Two of the rare orangutans — Sinta and Conny — were shown videos of available males to see if there was any interest in hopes of one day breeding, according to a statement from the Wilhelma Zoo in Stuttgart.

“The signs are positive,” the zoo said after Sinta and Conny appeared to take a liking to a male named Gempa living 350 miles away in Belgium.

The zoo said Sinta and Gempa are now enjoying a real-life date at the Pairi Daiza zoo, approximately 40 miles south-west of Brussels.

“We will now have to wait and see, whether it will be love at second sight,” Marianne Holtkoetter, the zoo’s curator for great apes said in the statement.