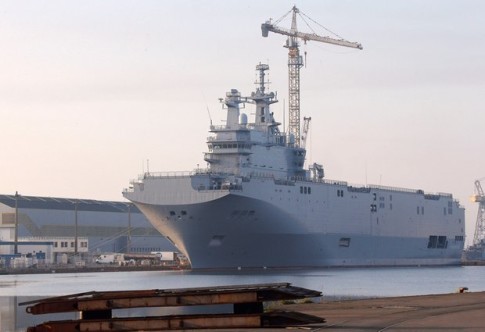 The paper reported Tuesday that the inauguration of the Mistral, which will raise the Egyptian flag and sail from France’s Toulouse to Egypt, will be attended by Egyptian defense minister Sedki Sobhi and his French counterpart Jean-Yves Le Drian.

The LHD warship is set to be named after the late Egyptian President Gamal Abdel-Nasser.

Earlier this month, 170 Egyptian crewmen sailed in a week-long training operation to familiarize themselves with ship.

According to AFP, another Mistral helicopter carrier, named after the late Egyptian President Anwar El-Sadat, will be delivered in September.

The contract for the two Mistral carriers, which was finalized in September last year, was valued at 950 million euros.‎

France now tops the list of countries to have signed ‎military supply agreements with Egypt during the term of President Abdel-‎Fattah El-Sisi after a May arrangement that witnessed the signing of a series of bilateral military cooperation deals. ‎

Earlier in May, Cairo finalised the purchase of a military reconnaissance and ‎monitoring satellite.

Last year Egypt successfully concluded ‎contracts for 24 Rafale fighter planes of which seven have been delivered.